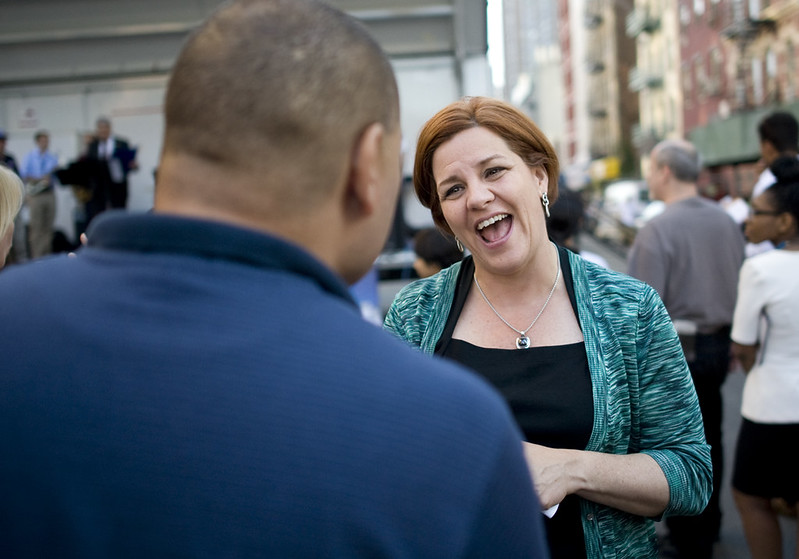 Christine Quinn is frustrated. Quinn, formerly the Speaker of the New York City Council and currently the CEO of Win, a nonprofit that is the largest provider of shelter and permanent supportive housing to families in New York, believes much more can be done to support homeless New Yorkers.

The city continues to grapple with an immense homelessness crisis, with more than 60,000 people in city shelters each night, roughly 3,000 people living on the streets or in the subways, and several thousand others in various drop-in centers and other types of temporary shelters. About a third of the city’s homeless population is children.

Win houses 5,000 people a night, roughly half of whom are children under the age of 18.

“Twenty-five percent of everyone in shelters tonight are six years of age or younger. The face of homelessness in New York right now is a mom with a little child,” Quinn said during a recent appearance on the Max & Murphy podcast, where she discussed the city’s homelessness crisis, her work at WIN, and other topics, including former Mayor Michael Bloomberg’s then-imminent entrance into the presidential race.

Two major factors in driving homelessness among families in New York City are high rates of domestic violence and evictions, even if the city has taken major steps to reduce the latter in recent years. The administration of Mayor Bill de Blasio, who defeated a field including Quinn in the 2013 Democratic primary for mayor, regularly says that its many homelessness-fighting strategies have helped “break the trajectory” of increase that the city was on when de Blasio became mayor, and that homelessness would be much worse if not for its programs, which include free legal counsel to many low-income tenants facing eviction as rental vouchers.

Quinn said that 80 percent of mothers in Win shelters report having experienced domestic violence in their adult lifetimes, and the actual number is likely higher. Despite such a staggering rate of abuse, Quinn believes that the city’s support for these women has been lackluster.

“We don’t get any special money from the City of New York to address the 80% of our moms who are experiencing domestic violence...why wouldn’t you have these shelters prepared to take on domestic violence?” Quinn said. “All the current administration cares about is getting to the day where they can have a press release saying that we’re not at an all time high [of homelessness].”

Quinn wants to see more affordable housing and increased rental vouchers for families being rehoused; such vouchers can pay up to 70% of a family’s housing cost. While Quinn gives credit to de Blasio for having reinstated the voucher system in New York City, she also emphasized the need to do more with the program.

“Right now the amount that a voucher covers for a family of four is $1,551 [a month]...we’ve done a study, there’s nowhere in the borough of Manhattan [where a family can live for this amount],” she said. “We have people in shelters waiting months and months, working trying to find an apartment that will take their vouchers.”

Quinn does believe the city needs to build new shelters, which de Blasio is in the midst of doing, in part to get homeless families out of commercial hotels and unsafe “cluster site” shelters, which have often been rundown private apartments that the city rents. Part of the work at Win is identifying sites for new shelters and working with community stakeholders to encourage a welcome response to a new shelter and its residents. Win shelters often see less pushback than those for single adult men.

“The Win shelter has 24-hour security, CCTV cameras everywhere except the private rooms. These hotels have none of that,” Quinn said comparing Win shelters and the hotels. “We have extensive social services, security, job training, after-school homework help for kids, daycare, for our shelters.”

Asked about the debate between those advocating the “housing first” model of addressing homelessness, emphasizing the need for increased economic opportunity, and those who believe that homelessness cannot be tackled without first addressing other issues that cause people to become homeless in the first place, such as mental illness and past trauma, Quinn was dismissive of the debate, saying that such arguments served more to distract from taking necessary action.

“The last thing we have any time for is an academic ivory tower debate,” Quinn said. “All sides of that argument are correct. There’s different reasons people end up homeless. There’s different needs that need to be addressed. Not one of the families we have in Win have the same story...All sides are right, let’s get working...this is not brain surgery.”

“You can have a good proces conversation and move to perfection on process until you’re blue in the face,” Quinn said. “There are good people out there who want to talk about process and then there’s people who just want to delay the process and hope that the homeless people will go away because of their fear — we can’t get confused about which is which.”

Responding to the critique of a “shelter-industrial complex” leveled by those who believe that the shelter systems are too large and bureaucratic, Quinn made it clear that she felt the critique was completely illegitimate.

“We have 60,000 people living in shelter...you can cancel all of Win’s funding, you can make every private funder who funds us take our money away — where will the homeless go? Beyond humanity, we have a legal requirement to house all of the homeless. Where will they go — when I tell the 200 families living at one of our shelters tomorrow that they have to leave? The majority of people who work at organizations like Win do not make a lot of money and could be making a lot of money elsewhere.”

Bloomberg 2020
Shifting topics, Quinn addressed questions related to former Mayor Michael Bloomberg’s since actualized entrance into the 2020 Democratic presidential primary field. Quinn, who worked closely with Bloomberg when he was mayor and she led the City Council for eight years, said that she thought that Bloomberg’s move was unwise, as it’s already late in primary season.

“I don’t understand the strategy...at this point in the race when the field is narrowing how it’s a viable or appropriate moment to enter the race,” Quinn said. “As a former campaign staffer I don’t see it and I don’t get it,” Quinn said, adding that Bloomberg’s campaign announcement “feels like a distraction.”

While Quinn and Bloomberg worked collaboratively a great deal when they were both at City Hall, they also disagreed at times. Their relationship, including their work together to extend term limits, also appeared to hurt Quinn in her 2013 bid for mayor. Since that election, Quinn has been a vocal presence in Democratic politics, including an alliance with Governor Andrew Cuomo and frequent appearances on cable news to discuss national politics. She has not made an endorsement in the Democratic presidential primary, but made it apparent that she is not considering Bloomberg, who was a Democrat before becoming a Republican to run for New York City mayor in 2001. He later switched to independent.

New York City 2021
Regarding the next mayoral election in New York, set for 2021 and where her name comes up regularly as a potential candidate, Quinn said she hopes that the race would be focused on “the big issues of the moment,” such as homelessness, a lack of affordable housing, and New York’s issues with mass transit.

“I hope that the conversation around homelessness in the mayor’s race unites the reality that the affordability crisis and the homelessness crisis are two sides of the same coin,” she said. “We need to continue to have a big, bold, and specific conversation around mass transit transportation, the car traffic that’s on the streets, that’s an issue that’s not just a quality of life issue but it’s an economic development issue, it’s a job retention issue. This is critical to making sure that people who can’t afford to live at the center of Manhattan can be a part of that economic opportunity,” she said.

Asked how likely she is to be a candidate for mayor herself, Quinn said the question “sounds like a bet, and I’m not a betting girl.” Regardless of whether she pursues public office, Quinn maintained that she would remain politically active and listed a variety of issues she sees as important to the next big citywide debate about the future of the five boroughs.

In closing, Quinn was asked about how her perspective on issues of public policy had changed after serving in both the public and private sectors. She said that in general she was disappointed by what she identified as a failure in government to devote resources towards combating issues such as homelessness, which she argues shifts the burden further onto nonprofits.

“I now see really clearly how we don’t fund our service providers correctly, we don’t listen to them when they come forward with needs. Everything is too driven by the Office of Management and Budget, and the number crunchers, and not first by the issue,” she said. “I’ve also seen how not giving enough resources also burdens nonprofit service providers unnecessarily...I am just struck by the lack of partnership, the adversarial posture government takes towards service providers.”