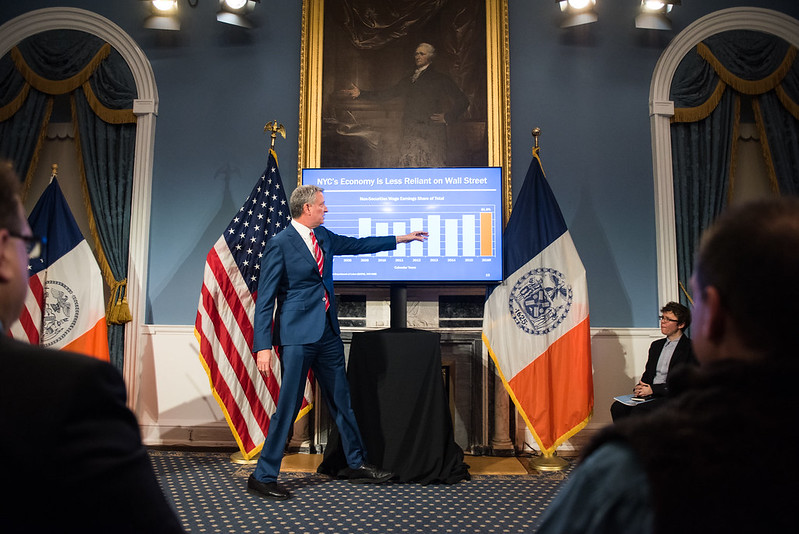 Mayor Bill de Blasio on Thursday released a $95.3 billion preliminary budget proposal for the 2021 fiscal year, which begins July 1, increasing planned spending by about $2.5 billion or 2.7% over the city budget that was adopted last year.

The growth in spending is lower than previous budget increases the mayor has proposed and an uptick from the $94.3 billion that the city projects to spend by the end of the current fiscal year, according to budget modification documents released in November. The city budget has ballooned massively under de Blasio’s tenure, up over $20 billion in annual operating spending over the six years.

The budget growth can mostly be attributed to settlement of labor contracts and related benefits, which will cost about $1.6 billion. Another $256 million stems from increased costs for charter schools and special education, mandates imposed by the state, per the mayor’s office. The criminal justice reforms passed by the Legislature last year, which took effect this January 1, will cost another $175 million, which includes the cost of hiring another 1,000 workers across multiple agencies, the city says. And about $270 million is budgeted for debt service.

The mayor indicated that his relative fiscal restraint was driven by a massive gap in the state budget, stemming from a significant expansion of Medicaid costs that has prompted Governor Andrew Cuomo to pursue structural changes to the program, among other measures he may use to close a $6.1 billion gap for the state fiscal year that begins April 1.

“[T]he situation is very straightforward and our focus is in one place, which is Albany, New York,” de Blasio said at his presentation at City Hall, citing the “extremely worrisome” Medicaid cost issue.

Though the governor has said he will not seek to make cuts to spending that would affect localities, particularly New York City, the mayor seems worried nonetheless. Medicaid is among many funding areas where state cuts or cost-shifts could impact the city’s bottom line. De Blasio also noted that Cuomo, in his State of the State speech, implied that localities were leading the increase in costs. “I found that confusing. Mayors all over the state found that confusing...everyone was confused by the idea that somehow localities were running a program that we don’t run.”

“In planning for the next year, we are facing an unprecedented $6 billion State budget gap,” de Blasio said in a statement accompanying release of his preliminary budget plan. “Medicaid cuts could reverse years of progress at NYC Health + Hospitals and impact health care for the most vulnerable. We will work with our partners in Albany to continue to find savings while fighting to protect health care for all New Yorkers.”

De Blasio also raised concerns about costs at the state-run MTA, which he noted gets 70% of its annual revenue from New York City residents, taxpayers, commuters, and visitors. He noted that the MTA has asked for about $3 billion in additional funding from the city for its new capital plan, despite having barely spent capital funds that were appropriated years ago. He also critiqued the agency’s demand for $100 million more in operational funds for the struggling Access-A-Ride program. “We are not giving $100 million to a broken system,” he said, calling more broadly for an independent audit of the MTA and proof that it is a better-run operation than it has been.

Given uncertainties relative to state aid and the economy, as well as all of the prior city budget growth, de Blasio’s latest budget plan includes little by way of additional spending on new ideas or programs. The mayor said at his presentation that he was waiting to see the governor’s budget proposal next week, and that he may yet propose some big plans. "I want to protect all the big initiatives that are underway already....but there’s a lot more that is waiting to be announced if we believe we can make it work but we got to see what happens certainly next week as a first step," he said, in response to a reporter's question. De Blasio's annual State of the City speech is expected sometime in February and he mentioned several times there are announcements either set to come or on the back-burner awaiting clearance by the budget picture.

There are several areas of additional targeted investments, which the mayor’s office stressed are offset by savings that have been identified.

The budget proposal estimates that city revenues will grow at 2% in the 2021 fiscal year, down from 4.6% in 2020. The city’s Office of Management and Budget often makes more cautious estimates than the City Council and Comptroller’s Office, in part to allow for more flexibility in adjusting spending down the line.

But the lower growth projection is also an acknowledgement of broader signs of slower economic growth, amid the longest period of economic expansion in the country since after the Great Depression. Most observers and fiscal watchdogs expect an inevitable end to that expansion and some say it may be around the corner.

According to OMB, new spending in the preliminary budget, including $441 million in the current fiscal year and $243 million in FY 2021, will be completely offset by $714 million in savings identified between the two fiscal years. Unlike last year, the mayor has not instituted a Program to Eliminate the Gap (PEG), which had given city agencies specific savings targets to meet. That could, however, be revisited, he said Thursday.

The budget proposal also maintains the city’s reserves at the same level as last year – $1 billion in the general fund, $250 million in the capital stabilization reserves, and $4.7 billion in the Retiree Health Benefits Trust fund. Though that is the highest level of back-up funds the city has maintained, and independent watchdogs and monitors have broadly praised the city’s fiscal management under the mayor, they have also repeatedly emphasized that the city should be putting more money away to prepare for a recession.

The increased spending includes $147 million for wages and benefits for the city’s uniformed workforce across the 2020 and 2021 fiscal years. The city will also spend about $106 million in the next fiscal year on the expanded Fair Fares program to provide discounted MetroCards to low-income New Yorkers. About $1.8 million over the next three fiscal years will go to “community based justice programming” at the Community Justice Center in the Far Rockaways.

The mayor also announced a series of capital fund investments -- which are accounted for in a separate budget -- in critical infrastructure projects including $98 million for street safety improvements on 4th Avenue in Brooklyn; $178 million over three fiscal years to build curb cuts citywide; $33 million across FY 2020 and 2021 to reconstruct beach crossings; $12.9 million in FY 2021 for improvements at NYCHA community centers.

Release of the mayor’s preliminary budget will set off initial reactions from the City Council, advocates, and interest groups, and lead to a month-long round of Council budget hearings. Next week, Governor Cuomo will outline his executive budget for the next state fiscal year, which will certainly impact city budget discussions. De Blasio is expected to go to Albany for his annual budget testimony to discuss Cuomo’s plan and the city’s priorities in front of the state Legislature, all leading toward the mayor’s executive budget plan in the early spring.

In an initial response to de Blasio's preliminary budget, City Council Speaker Corey Johnson and budget committee chairs Council Members Danny Dromm and Vanessa Gibson said they understand the mayor's wariness about the state budget picture and will be working to ensure state funding to the city, while crafting a city budget to meet the needs of New Yorkers.

“The Council is also mindful that while the City’s economy remains healthy, we must plan for future financial slumps," their joint statement reads, in part. "We will work with the Administration to find savings in the budget while continuing to grow our priorities like Fair Fares, criminal justice reform, education, affordable housing, homelessness and transportation. The Council is committed to negotiating a budget that works for everyone, which means making sure we get our fair share from Albany for schools, housing and infrastructure."

This article has been updated based on additional information from the mayor's budget presentation and the City Council response.