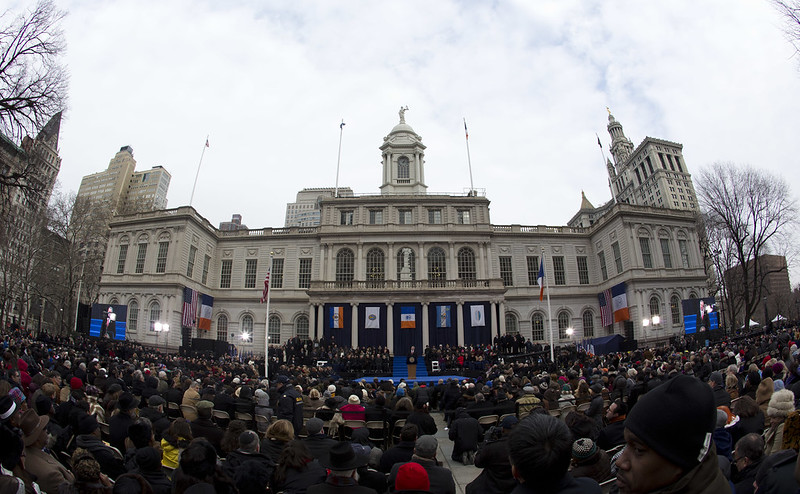 Candidates running for local office filed their latest campaign finance disclosures with the New York City Campaign Finance Board this week, showing their fundraising and expenditures from the last six months, and cumulative numbers for the 2021 election cycle.

Next year’s election is shaping up to be highly competitive and consequential, with two of three citywide elected officials, four of five borough presidents, and 35 of 51 City Council members facing term limits. The city will elect a new mayor and comptroller for the first time in eight years, among many other new positions to be decided by voters through the June 2021 primaries and general elections to follow that November.

Early fundraising numbers can give an indication of which candidates have momentum behind them for 2021 and which ones may struggle to show popular support. The most immediate race to watch is just two months away: the March special election for Queens Borough President, which was triggered by Melinda Katz’s election as Queens District Attorney. While that race could lead to a special City Council election to fill the victor’s seat, several sitting Council members are running, the vast majority of the upcoming city action is for 2021. And that election cycle will see the first implementation of ranked-choice voting in primaries, which is likely to shift not only some campaign strategies, but outcomes.

Also relatively new are recent enhancements to the city’s voluntary campaign finance program, where candidates will be able to raise far more public funds from small dollar donations, though they could choose to abide by the old rules which have higher contribution limits but lower public funds payments. The new system will become mandatory after this election cycle.

Under the old system, a participating mayoral candidate could raise a maximum donation of $5,100, and could receive a 6-to-1 match on the first $175 of every qualifying contribution. The new system comes with a $2,000 contribution limit but provides an 8-to-1 match on the first $250. Similar numbers apply to candidates for other offices, with max donations dropping as the offices move from citywide to boroughwide to City Council.

The public funds program also comes with spending limits, which do not apply to those who do not participate (though spending limits can be raised or eliminated in certain rare cases).

Participating mayoral candidates can spend nearly $15 million, limited to just under $7.3 million in each of the primary and general election (only up to $343,000 can be spent in outyears such as 2018, 2019, and 2020). They can receive a maximum of about $6.5 million in public funds under the new campaign finance rules and $4 million under the old rules. The first public matching payouts will be made in December of this year, helping to set off what will be a six-month sprint from just after the presidential election to the June 2021 primaries, where the Democratic races will all-but-certainly decide most of the November winners.

Candidates for public advocate and comptroller can spend $4.55 million in the primary as well as the general for a total of more than $9.1 million, with the same outyear limit as mayoral candidates. Public funds payments to those citywide candidates are capped at $4 million under the new rules and $2.5 million under the old ones. While there’s a competitive ‘open seat’ race heating up for comptroller given incumbent Scott Stringer’s term limits, Public Advocate Jumaane Williams is expected to win another term without much competition.

The spending limit for borough president candidates is $1.64 million for each the primary and general election, for a total of nearly $3.3 million, with $153,000 allowed in the outyears. Opting in to the new system would allow such candidates a maximum of $1.45 million in public funds, while the old system provides up to $902,000.

Mayoral Contenders
Comptroller Scott Stringer leads in total fundraising over the other declared and likely candidates running to replace Mayor Bill de Blasio, who is also term-limited. Stringer has raised a total of about $2.7 million for his campaign (including $1.4 million transferred over from his previous campaign account) and has spent about $296,000, leaving him with a hefty $2.4 million in cash on hand.

In the latest disclosure period, from July 12, 2019 to January 11, 2020, he raised $130,000 and spent about $79,000. But he also chose to opt in to the new campaign finance rules, which forced him to refund about $446,000 to donors. His total fundraising includes about $423,000 in contributions that the campaign claims would qualify for public matching funds but that number has yet to be audited and will likely change since he switched to the new rules.

Brooklyn Borough President Eric Adams is a close second in total fundraising, having pulled in $2.3 million in total (which includes a $365,000 transfer of funds from a previous committee), and he has spent about $321,000 so far, for a remaining balance of just over $2 million.

In the latest period, he raised just under $194,000 and spent about $76,000. Like Stringer, Adams also decided to change course and participate under the new campaign finance rules. He had to refund about $663,000 above the lower contribution limit. His campaign has claimed to the CFB that it has received about $560,000 in qualifying small dollar contributions but, like Stringer, the actual number remains to be determined by the CFB.

Bronx Borough President Ruben Diaz Jr. has raised $1.25 million in total and spent just above $347,000, leaving him about $905,000 in cash on hand. Diaz Jr.’s recent fundraising has been lacklustre compared with other candidates. He only brought in $76,000 in the latest disclosure period and spent $102,000 (On Thursday’s “Driving Forces” show on WBAI radio, Diaz Jr. told host Jeff Simmons that “it's not encouraging.” He added: “You know, running for Mayor of the City of New York is monumental. This is what I try to tell folks, we have to have a sense of urgency. These are all things we have to weigh as we move forward.") Perhaps eyeing the chance to be the candidate supported by bigger monied interests, Diaz Jr., who has been a pro-development borough president, has opted in to the old campaign finance system, which will mean 6-to-1 for his small dollar contributions. His campaign has claimed nearly $71,000 in qualifying donations.

City Council Speaker Corey Johnson is the only candidate who self-imposed a lower-than-mandated donation limit, saying he won’t take anything over $250 from anyone. While this has resulted in a far smaller haul than the others, he’s banking on the new 8-to-1 match to get him in the same ballpark (all four of the big-name candidates expected to run for Mayor are likely to raise what is needed to be able to spend the maximum allowed, though that’s not a given). Johnson, who started fundraising later than the other three, has raised $790,000 so far, and has spent about $98,000. He has about $691,000 in his campaign account. But he’s claiming as much as $575,000 in qualifying matchable contributions.

The most recent entrant into the race is retired Army Brigadier General Loree Sutton, the former commissioner of the city’s Department of Veteran Services. She has raised $113,000, spent about $61,000, and has $52,000 left in her account. Her campaign claims about $13,000 in matchable contributions so far and she is participating in the old campaign finance program.

There are other candidates who have also declared mayoral bids but have few funds raised so far, including Aaron Foldenauer, Dianne Morales, and Joycelyn Taylor. Of them, Morales, who runs a nonprofit in the Bronx, has raised the most at about $62,000, and has spent about $26,000. She has $36,000 in the bank as of the filing.

Comptroller
There are four declared or exploring candidates for city comptroller – City Council Members Brad Lander and Helen Rosenthal, State Senator Brian Benjamin, and Assemblymember David Weprin. All of the candidates are participating in the new 8-to-1 matching system.

State Senator Brian Benjamin has close to the same amount of campaign cash at this time. Though he has raised less than Lander, a total of $265,000, he has only spent about $13,500, leaving him with $252,000 in his campaign account. He claims about $90,000 worth of qualifying contributions. All his fundraising occured in the last six months.

Borough Presidents
The Queen Borough President special election -- set for March 24 of this year -- is shaping up to be a quick and competitive race, with nine candidates having filed petitions with the Board of Elections. In Brooklyn, there are also several candidates running in the 2021 race. But in the other boroughs, there seems to be little competition. In both Staten Island and the Bronx, there is only one candidate who has declared a run. In Manhattan, only two candidates are poised to face each other.

Queens Borough President
There’s little time left till the March 24 special election for Queens BP, which looks like it will be a competitive race among several sitting and former Democratic City Council members, with other longshot candidates on the ballot as well. All of the candidates are enrolled under the new campaign finance rules.

Council Member Donovan Richards has not raised as much but is considered a frontrunner after he was endorsed by the Queens Democratic Party in December. He has raised nearly $199,000, spent about $72,000, and has a balance of $126,000. He has claimed $64,000 in matchable contributions.

The CFB will start distributing public funds by the last week of January, after the Board of Elections has set the ballot.

The other candidates in the race include Danniel Maio, Anthony Miranda, Jim Quinn, Dao Yin and Everly Brown, all of whom have not made major strides in fundraising.

Brooklyn Borough President
Three candidates are currently in the running for Brooklyn Borough President – Council Members Antonio Reynoso and Robert Cornegy, and longshot candidate Lamor Whitehead-Miller – after Council Member Rafael Espinal dropped out of the race early. Cornegy and Reynoso are participating in the new public funds program while Whitehead-Miller has not opted in to the program at all.

Whitehead-Miller, a preacher and activist, does not seem to be running much of a campaign. He hasn’t raised more than $26. Meanwhile, the New York Daily News reported on Friday that Mayor Bill de Blasio has been pushing his wife, First Lady Chirlane McCray, as a possible candidate as well, and there have been rumors of others joining the fray, such as Council Member Mark Treyger.

Manhattan
The Manhattan Borough President race is shaping up to be a contest between sitting Council Members Mark Levine and Ben Kallos, both Democrats. Levine and Kallos are both participating in the new public funds program, while Levine has raised far more than Kallos early on. His most recent filing shows a total fundraising haul of about $282,000 and expenditures of about $98,000. He has just over $184,000 in cash on hand, and has claimed more than $100,000 in matchable contributions.

Staten Island
Staten Island Council Member Steven Matteo, a Republican, is the only candidate currently running for Staten Island BP. He has raised about $156,000 and, with little competition and so far out from the race, he has only spent about $14,000. He has a balance of about $142,000. He has not opted into the public matching funds program. Many are waiting to see if Democratic Council Member Deborah Rose jumps into the race.

The Bronx
In the Bronx, Democratic Council Member Vanessa Gibson is the sole declared candidate for borough president. She doesn’t seem to have kicked off her fundraising efforts in earnest, however. She has only raised about $14,000 and has spent less than $2,000. She is participating in the new campaign finance system. Council Member Andy Cohen, a fellow Democrat, has expressed some interest in the race but has not created a committee or raised any funds for it so far.