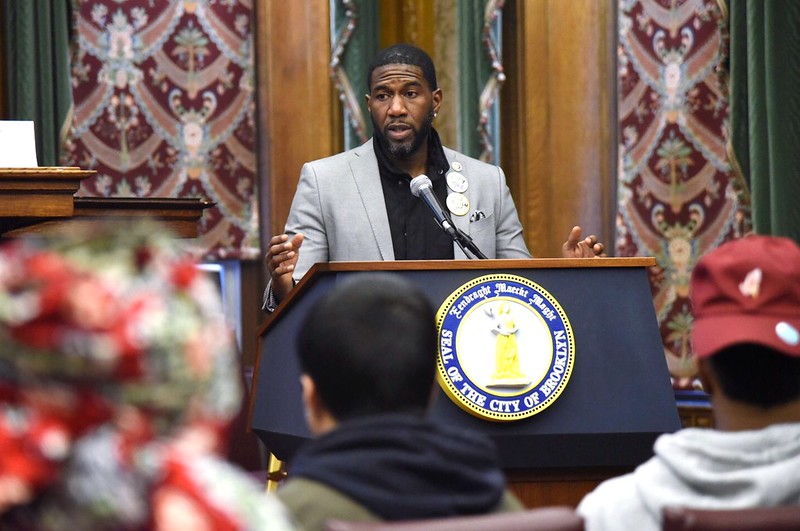 In his inaugural State of the People speech on Wednesday, Public Advocate Jumaane Williams cast himself as Sisyphus, relentlessly pushing a boulder up a hill. But rather than the punishment doled out to the mythological Greek king, Williams bears the burden in service of the people of New York City, he said, and rather then being doomed to eternally fail, he said he is making progress.

Over a roughly 40-minute speech, he touted his accomplishments as an ”activist elected official,” many of which came through legislation he passed as a City Council member, victories at the state and local level, and pledged to pursue an agenda of criminal justice reform, housing equity, environmental improvement, immigrant protections, worker rights, and more.

“The people are the core of New York City, theirs are the voices I've heard, and the ones I'm in this office to amplify,” Williams said, speaking at Brooklyn College, his alma mater, to an audience that included his predecessor, State Attorney General Letitia James, City Comptroller Scott Stringer, City Council Speaker Corey Johnson, and several state and city legislators as well as advocates and others.

After taking office last year, Williams has sought to restructure the office in his image as a community activist, appointing deputy public advocates to cover different responsibilities across the five boroughs. A recent City Charter revision approved by voters will also give the office an independent budget starting next fiscal year.

As a former tenant organizer, housing has long been one of Williams’ priorities. He hailed the landmark tenant protections and rent reforms passed by the state Legislature last year, but said more needs to be done, including a push to institute good cause eviction, one of the few measures that failed.

Williams’ power as public advocate lies in the city, however, where he can introduce legislation before the City Council even as he rallies like-minded New Yorkers to call on Council members and the mayor to support it. He laid out several legislative priorities in his speech.

Williams, whose office has continued the tradition of releasing an annual Worst Landlords List, said he would introduce a Worst Landlord Accountability Act, to target those in the industry that continue to flout Albany’s newly strengthened rules. Among its provisions, he said, would be limits on landlords self-certifying repairs to buildings, enhanced penalties for failure to carry out critical repairs or lying about them, and greater transparency in building ownership. “[W]e will continue to shine a light on shady management companies and mismanagement practices,” he said.

But at the top of his Worst Landlords list is public housing, the mismanaged New York City Housing Authority (NYCHA), “an agency that has earned a new chair, a federal monitor, but not its tenants’ trust,” he noted.

Williams indicated that he would, in coming weeks, highlight those public housing developments with the most complaints from tenants and lowest response times, calling for more funding to fix them. He also said he would introduce a bill “to create a [NYCHA] tenant-centered task force to solve problems by focusing on the people facing them in their daily lives,” though he did not provide any further detail.

Williams has been a longtime critic of the de Blasio administration’s housing program, which aims to preserve affordable housing with city intervention and to build income-targeted housing in low-density areas to make the city more affordable but has struggled to make a major dent in a rampant housing affordability crisis. At the same time, homelessness has reached record levels with few signs that the city will be able to significantly reduce the number of homeless people in the near future.

At the nexus of the housing debate are the various neighborhood rezonings across the city that Mayor Bill de Blasio’s administration has proposed and pursued, to mixed success. Critics complain that the rezonings are too often targeting low-income communities of color, exacerbating gentrification and furthering the displacement of current residents. Williams is one of those critics and has called for a moratorium on all rezonings – he has advanced legislation to mandate a racial impact study for every city-sponsored rezoning, which he reiterated on Wednesday.

“Whether you're trying to pay the skyrocketing rent on a studio or facing foreclosure on a split-level, we will be working for you,” he said. “We are going to help New Yorkers go home.”

The mayor has argued, on the other hand, that the rezonings help to stem the tide of gentrification by adding housing, including rent-regulated housing, to areas already seeing rampant displacement and real estate speculation that would become far worse for existing residents if not for city intervention, which also often includes investments in schools seats, parks, and other aspects of the larger community.

As he regularly does, Williams also inveighed against the slow progress the city has made in transparency and accountability in policing, criticizing the reactive approach that he said leads to more policing for every problem from drug addiction to the city’s mental health crisis. “Public safety does not equate with policing, nor does it exclude it,” he said. “Better policing is a part of keeping New Yorkers safe, and the NYPD can be our partners in public safety as we take on immense challenges together. But police cannot, and should not, be made to do everything.”

In particular, he touted his office’s recent report that seeks to change how the city responds to those experiencing mental health crisis, removing the NYPD from that role. He said he would continue to press for implementing that plan, which includes a separate mental health emergency hotline. “We'll also be pushing to realign budget priorities to this holistic response. In the last year, we have been part of shifting the conversation. Now we need to shift the money,” he said.

On criminal justice, Williams had much to pledge. He said he would continue to advocate to end solitary confinement across the state, and said he would work to expand the Fair Chance Act, which prohibits employment discrimination based on criminal history.

Williams also took aim at the city’s school system, the largest and most segregated in the country, obliquely critiquing the solutions that have been offered by Mayor de Blasio and Schools Chancellor Richard Carranza without naming them.

“We have a curriculum of separation that divides students by zip code, by race, and false perception of abilities,” he said. “Well intentioned reforms are being put forward without consideration of unintended consequences, from removing the SHSAT to entirely abolishing the gifted and talented program.” He said the problem could not be solved “by pitting communities against each other.”

A major piece of legislation that Williams had sponsored while in the City Council, and which the mayor used as a campaign talking point during his short run for president, would provide guaranteed paid time off to about half-a-million New Yorkers. Williams pledged to continue the push for the bill. “After five years with this legislation, and the many decades of work that led us to this point, we can seize the moment and create transformational change for workers while uplifting and supporting our small businesses,” he said.

Williams also expressed support for legislation that would allow prison inmates to vote, as well as legislation to let green card holders and immigrants with work permits cast ballots in local elections. “We cannot create second-class citizenry in New York City, and that means everyone, no matter national citizenship status, has their right to vote restored for municipal elections,” he said. (Non-citizens could previously vote in New York City school board elections, but the boards were eliminated in 2002. Several municipalities across the country also currently allow non-citizen voting. On Thursday, Council Member Ydanis Rodriguez is introducing legislation, which Williams has co-sponsored, to allow non-citizen voting in municipal elections.)

One of the obscure aspects of the public advocate’s office is its purview over the Commission on Public Information and Communication (COPIC). Williams promised to revive and reinvigorate the commission, a vow that his predecessor, now-AG James, also made but failed to deliver, in order to increase government transparency.

“I know sometimes this work feels like Sisyphus, pushing the boulder up the hill,” Williams said. “It feels like the challenge is too great, the goals too lofty. At times, we get tired. But it is in these times that we look to our past victories, to the gains fought and won, as inspiration and invigoration for what's next, what we the people need, and what we can do.”

“I know we can achieve great things because we've done it before,” he said, later in the speech, returning to the metaphor. “The hill still stretches steep before us, the boulder is still a great weight, but we cannot wait, because we have the people behind us.”