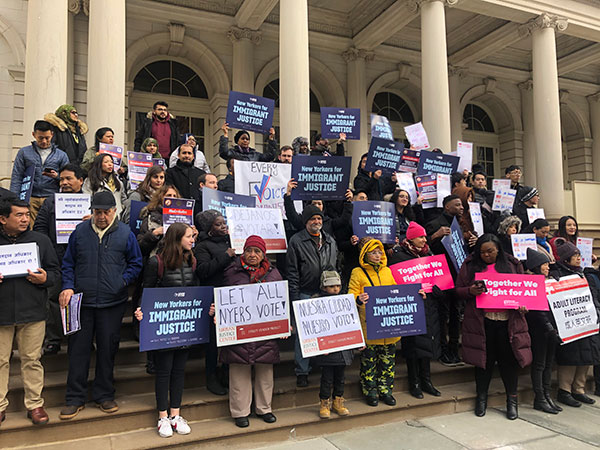 About 1 million foreign-born New York City residents who have permanent residency status or are legally authorized to work in the United States could become eligible to vote in municipal elections under a new bill introduced before the New York City Council on Thursday.

Sponsored by Council Member Ydanis Rodriguez, a Manhattan Democrat, the bill (Intro. 1867) would extend the franchise to green card and work permit holders who can show they have lived in the five boroughs for at least 30 days. The bill is the latest attempt to give immigrant New Yorkers a voice in the city’s democracy, after previous proposals failed years ago. It has the support of 26 other Council Members, a majority in the 51-member body, as well as Public Advocate Jumaane Williams, who can sponsor but not vote on bills.

“The immigrant voting right will be expanded, [it] will make our democracy stronger because it will connect close to 1 million New Yorkers with the right to vote,” Rodriguez said, pointing to his own past as a green card holder for years before he was naturalized. He appeared at a rally on the steps of City Hall with advocates from more than 40 groups to launch the #OurCityOurVote campaign, just prior to the bill’s introduction at a City Council meeting.

Allowing a largely disenfranchised immigrant population to vote would make the city’s elections more democratic, Rodriguez emphasized, by requiring candidates running for local office to ask for support from the immigrant communities that they seek to represent but that have no say in who represents them. Immigrants pay taxes that fund city services they rely on. “Allowing more people to vote does not weaken our democracy. It makes it stronger. It brings more people to the table and encourages more involvement,” he said.

As several Council members and advocates after him noted, noncitizen voting is not a novel notion. As recently as 2002, noncitizens could vote in elections to community school boards before they were dissolved by former Mayor Michael Bloomberg after he won mayoral control of city schools from Albany.

“This idea that we’re talking about is not a new idea,” said Council Member Carlos Menchaca, a Brooklyn Democrat who chairs the Committee on Immigration. “We are restoring this ability for our residents who are not citizens to vote.” Other jurisdictions across the country also allow some form of noncitizen voting in municipal polls, including in Takoma Park, Maryland and San Francisco.

Council Member Daniel Dromm, a Queens Democrat who unsuccessfully sought to pass similar legislation in his first term in 2010, noted that 68% of the residents of his district are recent immigrants, and about 55% of his district cannot vote. “This is really about empowerment and enfranchisement of our immigrant communities and other communities as well,” he said. “Because if you have rule by the minority, which is what I have in my district, that is not an American principle. The American principle that we all stand by is no taxation without representation.”

Though the bill has more than the requisite votes to pass, it has yet to receive the support of Council Speaker Corey Johnson. When he was running for speaker, Johnson said he would support voting rights in municipal elections for permanent residency holders. Rodriguez’s bill goes beyond that. Asked about the bill at a news conference on Thursday, Johnson said it could raise legal concerns. “I have to look at it, I haven't done that yet,” he said. “I will go through the legislative process. I'll meet with Councilman Rodriguez and the other folks who are involved, and then we'll have a conversation around it. But I haven't had a chance to sit down, understand the details.”

He later added, “Given that it's really important that we do things by the book, and also given that we have a xenophobic, racist president who has weaponized [Immigration and Customs Enforcement] across the country, I want to be really careful about how we do things.”

Council Member Joe Borelli, a Staten Island Republican, said he intends to vote against the bill. He said in a Twitter thread that the measure should go through a ballot referendum as with other changes to the City Charter. “This way, it can’t be used as a ploy to change the electorate for the current election cycle and benefit anyone now running, and so that our current citizen-voters have a say in whether or not their votes get diluted. This seems like a play to change the election map for the next city races, and devalues New York citizens’ vote in the process.”

Council Member Eric Ulrich, a Republican from Queens, was more direct. “Should Non-Citizen New Yorkers Have the Right to Vote? I say no!” he tweeted.

Mayor Bill de Blasio’s office did not provide comment on the bill by publication time.

To those assembled outside City Hall on Thursday, the bill is particularly poignant at a time when Republican legislative majorities in conservative states are making efforts to limit access to voting either through cumbersome voter identification measures or through bureaucratic election administration rules. “For too long, members of our communities who live here, work here, raise their families here and pay billions of dollars in taxes have been shut out of the process,” said Theresa Thanjan, manager of member engagement for the New York Immigration Coalition. “We would like to open it up now for them to have a voice in the direction of our city.”