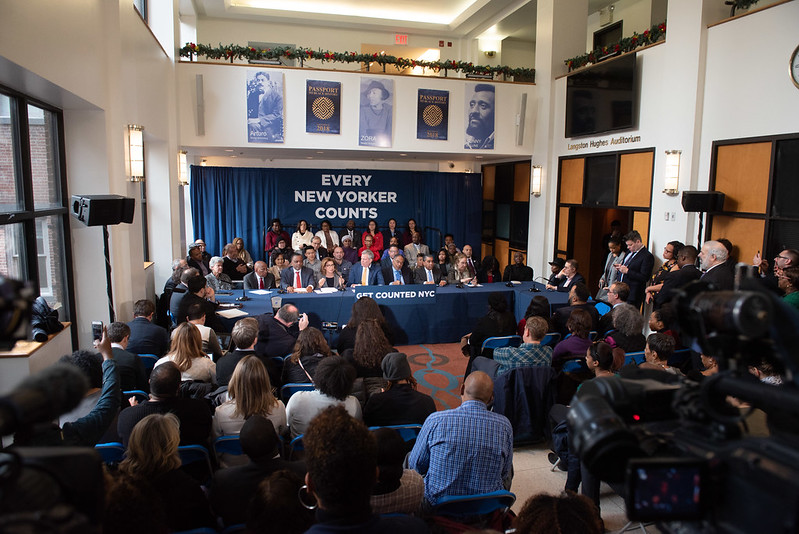 Every ten years, the U.S. Census Bureau undertakes the herculean task of counting the residents of the entire country. The process, which will occur this year, largely relies on people telling the federal government about themselves – who they are, who they live with, their age, their race, for instance -- in a count that has immense influence over how federal funding is allocated and congressional representation, among other things.

When people don’t respond to the Census questionnaire on their own, the Census Bureau (and its partners in states, cities, and other localities across the country) has to rely on other less accurate methods to complete the count, either in-person surveys or administrative measures.

Ahead of the launch of the 2020 Census in New York and across the country, leaders in New York City, which had a particularly low self-response rate in the 2010 Census, are emphasizing how important it is to get New Yorkers to participate in the initial round of questionnaires. Nearly all of the many tens of millions of city and state dollars allocated toward Census outreach is aimed at getting New Yorkers to fill out the Census as counting begins.

“Self-response is the gold standard in decennial census data collection and is the most accurate and efficient source of data,” say experts from the New York City Department of City Planning’s population division, in a new article in Significance magazine, which is published for the Royal Statistical Society and American Statistical Association.

The authors – division director Arun Peter Lobo, chief demographer Joseph Salvo, and senior demographic scientist Annette Jacoby – seek to raise a red flag about the potential for a low self-response rate, which can have disastrous consequences, and outlined the ways the city and other jurisdictions can tackle the problem.

New York residents had a self-response rate of 62% in the 2010 Census, far below the national average of 76%, which subsequently led to a significant undercount of the state’s population. Black residents in particular had the lowest rates of returning the questionnaire and were more likely to be undercounted, the authors noted.

The city, and the state overall, is also home to several categories of hard-to-count populations – immigrants, people with limited English proficiency, seniors, children under the age of five, public housing residents, to name a few. In addition, this year’s Census will employ a largely digital methodology, risking undercounting of rural populations and other areas with limited internet access, and it comes amid a tense atmosphere where many immigrants fear the motivations of the Trump administration, which unsuccessfully tried to place a citizenship question on the Census but appears to be considering other ways to target citizenship information.

All of those factors add up to a challenging undertaking, and it's why the city has already put about $40 million towards Census outreach, much of it geared to ensuring a robust self-response rate.

“The census is a national competition for billions of dollars in federal funds for education, housing, healthcare, transportation — programs New Yorkers rely on every day. The fair distribution of these funds is only possible if all New Yorkers are counted," said Julie Menin, Director of NYC Census 2020, in a statement. “In 2010, only 62% of New Yorkers self-responded to the Census; far below the national average of 76%. This year, with our unprecedented $40 million NYC Complete Count Campaign, we’re going to achieve a complete and accurate count of all New Yorkers and ensure that we all get our fair share of the resources and representation that are rightfully ours.”

Lobo, Salvo, and Jacoby note that those who tend to self-respond at a lower rate are also less likely to respond to door-knockers from the Census. In areas where there is a low-response, the Census Bureau and localities have to rely on alternate tactics – enumerators who go door to door; administrative records to fill gaps in data; or statistical imputation as a last resort.

These methods have their faults. For instance, if an enumerator cannot reach the resident of a housing unit, they may ask a landlord or neighbor about their information. Information from these “proxies” is “often highly speculative and prone to error,” the authors wrote.

Administrative records can be replete with inaccuracies and incomplete data, particularly for more socially vulnerable populations, they noted. “People who interact with government agencies, have bank accounts, and deal with public institutions are more likely to be represented in administrative records, while more vulnerable populations – including immigrants, the formerly incarcerated, and homeless persons – might be underrepresented because of the absence of such ties,” they wrote. “Even administrative data on benefits for underrepresented and marginalised populations fall short of capturing everyone, as those eligible to receive these benefits often do not apply for them.”

Statistical imputation involves using the information from “donor households,” the neighbors of non-responding households, to make certain assumptions about the household in question. According to the article, this process, called “substitution,” accounted for 1.9% of the total enumerated U.S. population in 2010. “Substitution in New York City was at 3%, with the highest rates of substitution clustered in just a few black neighbourhoods, where as much as 20% of the population was “enumerated” through a substitution algorithm,” the authors noted.

The flaws of that approach are obvious in a city like New York, where there is a broad diversity of households across the five boroughs.

The authors noted that there are two sides to an erroneous Census count – wealthier white residents tend to be overcounted while low-income residents of color tend to be undercounted. From a city planning perspective, the impact can be harmful to certain communities. “These lower-level geographic effects have real-life consequences in terms of conducting needs assessments, calculating rates of disease incidence, determining the distribution of resources and services, as well as the drawing of local political districts,” the city planners wrote.

“The finest operational plans and the best technology will not result in a good count,” they wrote, “unless the public heeds the call to answer the census.”