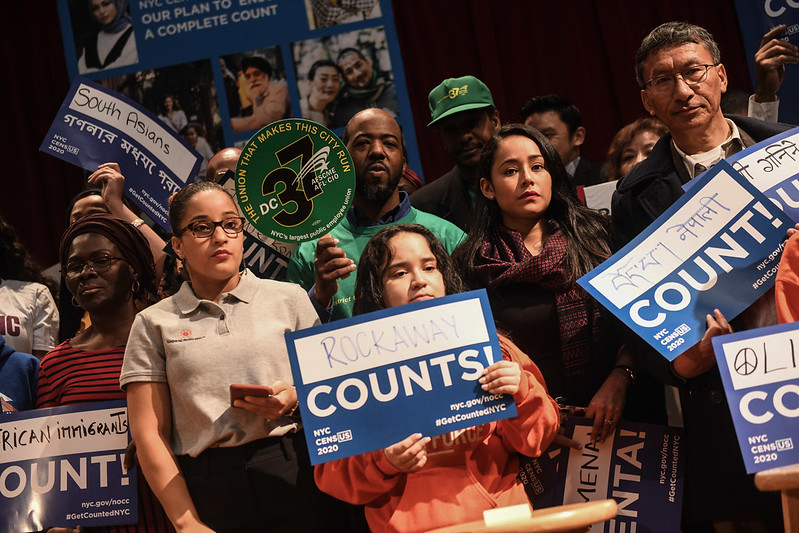 Black communities in New York have historically been more likely to be undercounted by the U.S. Census Bureau, meaning fewer federal resources and political underrepresentation for those who are often the most vulnerable members of the population and those who have often been disenfranchised and discriminated against. It’s a trend that city officials are hoping to counter in this year’s Census, with the help of nonprofit community-based organizations, and grassroots organizers. On Monday, at a roundtable at City Hall, officials made entreaties to members of the black media, to open lines of communication, stress the importance of the Census, and enlist their aid in spreading the message that responding to the Census is in the best interests of their communities.

Deputy Mayor for Strategic Policy Initiatives Phillip Thompson, who is heading up the city’s census efforts with NYC Census Director Julie Menin, noted the many reasons black communities and immigrants tend not to respond to the Census. Historically, they have had a distrust of the government, and fear that the information collected could be used against them, including by immigration enforcement authorities.

“When we talk about New York City, when we talk about government, black people's presence, history, experience, is marginalized and always has been, and I think that also affects people's willingness to participate in the census,” Thompson said to reporters from about a dozen outlets including Amsterdam News, Bronx Free Press, Hot 97, Bronxnet, WBLS, Black Star News, Brooklyn Reader, and more.

Along with Menin, he was joined by a panel that included Kathleen Daniel, field director of NYC Census 2020; Lurie Daniel Favors, interim director of the Center for Law and Social Justice at Medgar Evers College; Sheena Wright, president and CEO of United Way of New York City; Jennifer Jones Austin, CEO and executive director of Federation of Protestant Welfare Agencies; and L. Joy Williams, President of the Brooklyn NAACP.

A low self-response rate cuts across black communities – low-income communities, public housing residents, and middle- to upper-middle income black residents and homeowners all have a tendency to avoid filling out the Census questionnaire. For instance, Brooklyn is the hardest to count county in the state, and large parts of the borough – neighborhoods such as Bedford Stuyvesant, Crown Heights, East Flatbush and Brownsville, to name a few – where black residents made up more than 40% of the population had a relatively low self-response rate in 2010. Similar response rates were recorded in neighborhoods across the city such as Eastchester in the Bronx, Central Harlem in Manhattan and large swathes of Southeast Queens. That then leaves the task of finding and counting them up to the Census Bureau, and the methods it uses can lead to inaccuracies in the data and detrimental undercounts.

An undercount has several adverse impacts. It can lead to a loss of federal funds for many programs, including SNAP, WIC, and Section 8 housing vouchers, or lead to a reduction in funds for education and infrastructure. The greatest risk, however, is for the drawing of electoral districts at the local, state, and federal level, Thomson said. New York is all but guaranteed to lose one seat in the House of Representatives because of a loss of population, and could lose as many as two because of an undercount in 2020. And Census data will be used for redrawing legislative lines of all types, from Congress to the state Legislature to the City Council.

“The risk isn't distributed evenly across all communities,” Thompson noted. “The communities that are most vulnerable to losing representation are precisely black and immigrant communities, and sometimes they're one and the same…And that translates into loss of funding and support for programs that our communities need and also a loss of voice and presence in these decision-making bodies.”

New York’s black residents are not a monolith but have often been viewed that way by prior census efforts, noted Lurie Daniel Favors, interim director of the Center for Law and Social Justice at Medgar Evers College. But this year, individuals will be able to identify themselves on the census questionnaire by race, ethnicity, and nationality, an important measure that will more accurately portray the diversity of the black population in New York.

Favors noted the importance of recognizing the racial impact of the Census. “The first time we show up on the Census is 1790, and that was only as three-fifths of a person,” Favors said, referring to the Three-Fifths Compromise under which slaves were counted as three-fifths of a person to determine the electoral representation of states. “And we understand that historically, there has been a persistent commitment to the racial manipulation of data so that the distribution of resources and political power are also manipulated in ways that benefit institutionalization of white supremacy and the structures that rely on white supremacy and that disfavor communities of African descent.”

Other panelists similarly urged members of the black media to tell their audiences what they stand to gain, or lose, from the Census. Jennifer Jones Austin, CEO and Executive Director of Federation of Protestant Welfare Agencies, noted that the Census is a race among states over the distribution of roughly $630 billion in federal funds. “It doesn’t matter what your income is, if you are undercounted, then your community is going to suffer,” she said. Her organization has been working with faith-based groups and leaders, who are seen as trusted voices in black communities, to ensure a robust response to the Census.

L. Joy Williams, president of the Brooklyn NAACP, noted the need to break the myth of who is undercounted. African-American men, children under the age of 5 and seniors, for instance, are all at risk, she said.

Sheena Wright, President and CEO of United Way of New York City, framed the Census as akin to the civil rights movement. “When I think about that people fought, bled, and died for our basic civil rights, that it's incumbent upon us to stand up and be counted. It's almost like an act of resistance. It's an act of what we're doing as black people really fighting for what we deserve,” she said, adding that sustained and vigorous mobilization of black communities would act as a “springboard” for greater civic engagement in the future.

City officials have already laid the groundwork and are pursuing a massive Census outreach campaign this year, having put $40 million into a multi-pronged approach, which includes $19 million in direct funding for more than 150 community-based organizations. About $3 million will go to ads in ethnic and community media, comprising 65% of the total ad budget for the campaign.

“We need New Yorkers to DIY the Census,” said Kathleen Daniel, field director for NYC Census 2020, at Monday’s roundtable, using shorthand for “do it yourself” and laying out the city’s tactics, which include a multimedia campaign across all forms of media, partnerships with city agencies, and a field campaign that has recruited thousands of volunteers to work in the hardest to count census tracts.