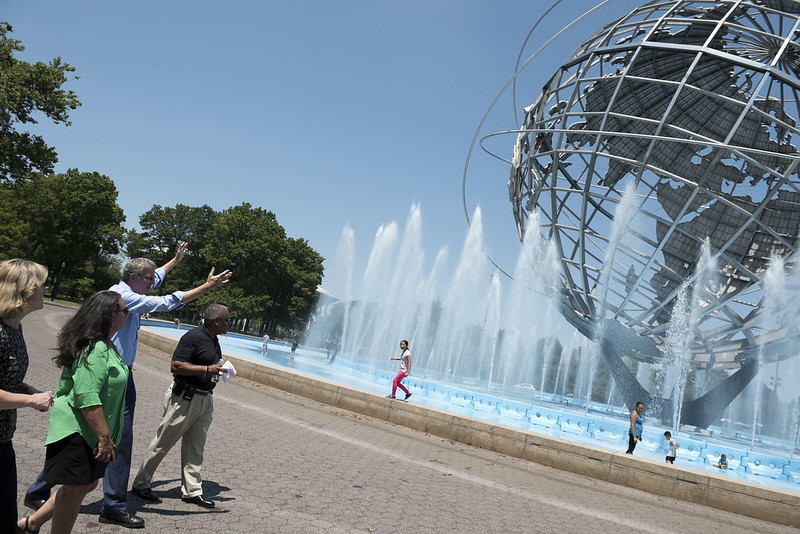 In low-turnout and low-information elections, like the typical special election in New York City, the prominence of a candidate’s name on the ballot can go a long way -- and that depends largely on the order in which the candidates are listed. Traditionally the subject of gaming by campaigns, for the March special election to name a new Queens Borough President, the order was determined by an unprecedented method: random draw.

“Three candidates filed simultaneously so the order of the ballot is going to be determined, by rule of our commissioners this past Tuesday, for the first three candidates that filed, via the lottery,” said Tom Satte, the ballot coordinator at the New York City Board of Elections, as he announced the outcome like the host of a lottery drawing. He was sitting in the BOE offices in Lower Manhattan in front of a large bingo wheel as another staff member turned, pulled, and read numbers off the colored balls inside.

Normally, ballot order is determined on a first-come, first-serve basis, where candidates are listed in the order in which they submit the requisite number of qualifying petition signatures starting on the submission date set by the BOE. But in the special election to replace former Queens Borough President Melina Katz, which has already seen its share of ballot-access wrangling among nearly a dozen potential candidates, three prominent campaigns -- those of Elizabeth Crowley, Donovan Richards, and Jimmy Van Bramer -- turned in their petitions within two minutes of one another, a margin narrow enough to lead elections administrators to consider using the novel approach for what they say is the first time.

On January 6, the third day to file petition signatures, Crowley, Richards, and Van Bramer, all current or former Democrats in the City Council, each delivered more than the required number of valid signatures and accompanying documentation between 9 a.m. and 9:02 a.m. Following a recommendation by the board’s legal staff and in compliance with state rules, the BOE voted to hold a random drawing among the three candidates to determine who’s name would appear first on the ballot.

“This is the first time that this specific issue happened,” said BOE General Counsel Steve Richman in a presentation to commissioners last Tuesday. “A fourth candidate filed at 9:06, Costa Constantinides, so I guess he’s not applicable [under our rules] because it’s four minutes later.”

The final order on the ballot will be Richards, Crowley, Van Bramer, then Constantinides (another Democratic Council Member), followed by Jim Quinn, Dao Yin, and Anthony Miranda. Van Bramer had dropped out of the race, citing his mother’s health, before the bingo drawing, but since he submitted valid signatures in time, his name will appear on the ballot.

Miranda, a former police sergeant who initially did not qualify because of a technical error on his cover sheet, was added to the ballot following a rare successful appeal. Quinn is a prosecutor and 42-year veteran of the Queens District Attorney’s Office and Yin is a businessman from Flushing.

In order to get on the ballot, candidates must obtain a set number of signatures from eligible voters, which varies depending on the office sought. For the Queens Borough President special election candidates needed to submit 2,000 valid signatures of registered Queens voters by the January 14 filing deadline. In partisan elections, like party primaries, the signatures must come from voters registered with the given party, but city special elections are non-partisan meaning candidates don’t run on traditional party lines, and any registered voter in the district could provide a valid signature. All Queens voters are eligible to vote on March 24, the special election day, and the nine days of early voting beforehand.

Candidates usually seek more than the minimum signature threshold -- often by a factor of three -- because once petitions have been submitted, campaigns try to challenge the validity of their rivals’ signatures in an effort to knock them off the ballot. The ability to submit enough signatures early and to challenge the signatures on an opponents’ petition is usually the sign of a well-organized and well-resourced campaign, and is part of the election calculus of campaign strategists.

The Queens Borough President special election was officially declared by Mayor de Blasio at the beginning of the year, when Katz took office as Queens County District Attorney after winning a crowded and closely-watched race in 2019.

Nine candidates, two of whom failed to get on the ballot, filed with the New York City Campaign Finance Board. In the first filing period all the candidates reported raising a collective $1.4 million in private contributions.

Of the roughly $858,000 spent in the race as of the January 16 filing, the biggest spenders remaining -- Crowley and Constantinides -- are also the only two thus far receiving public matching funds through the city’s campaign financing program. Crowley has spent about $232,000 and received $498,000 in public matches. Constantinides trails slightly, having spent $213,000 and received $477,000.