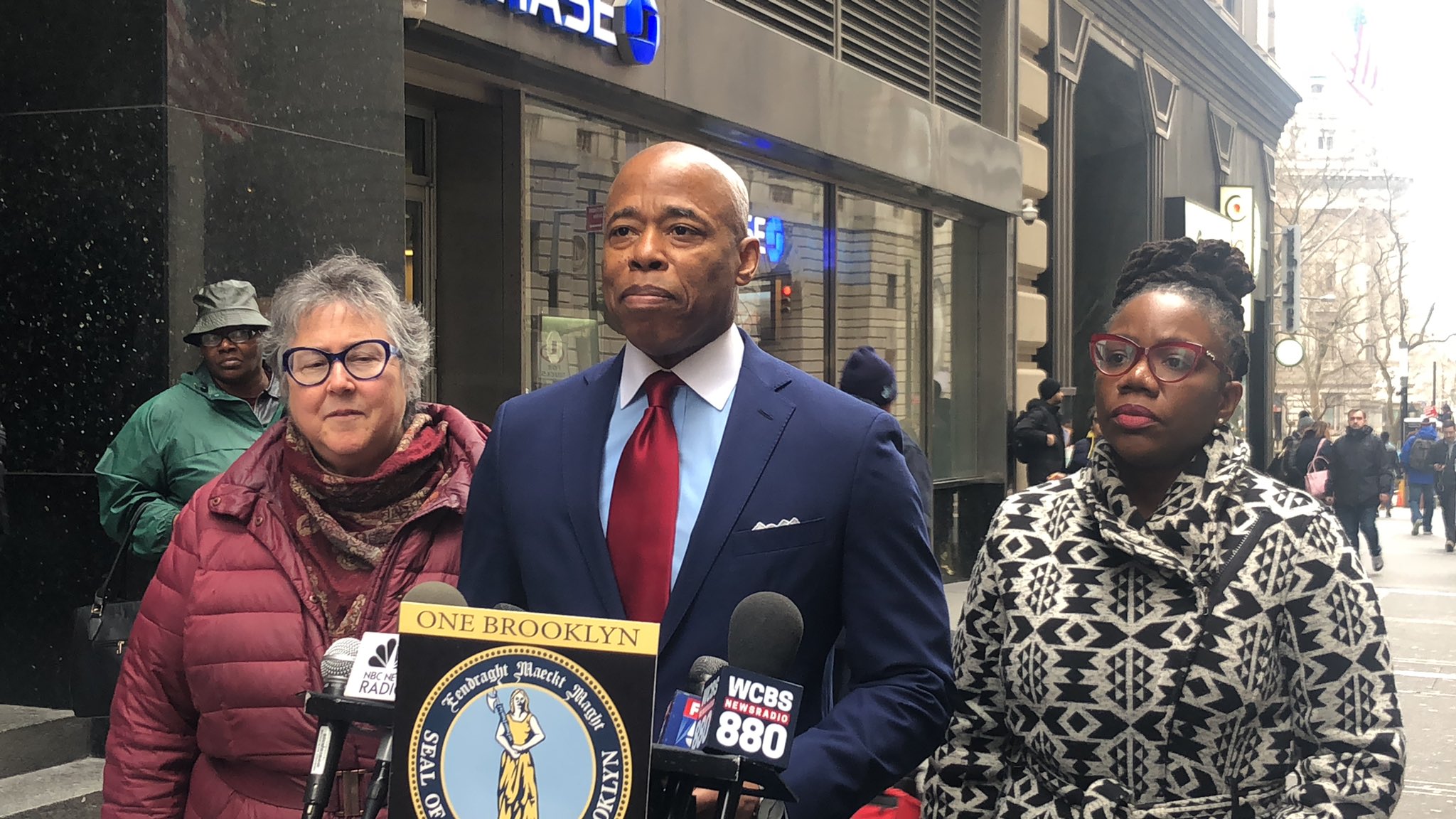 A push is now underway to ensure voters are educated about the new ranked choice voting system New York City will be adopting for some elections starting in 2021, and it is being driven by Brooklyn Borough President Eric Adams, a top contender in the mayoral race where the new format will first be tested.

At a press conference Wednesday in front of New York City Board of Elections headquarters in Lower Manhattan, Adams, along with Brooklyn City Council Member Alicka Ampry-Samuel and Susan Lerner, executive director of Common Cause New York, urged the mayor and City Council to include $10 million in the next city budget toward public education ahead of the implementation of ranked-choice voting, which was approved by voters this past November. He said the allocation would be offset by the money saved in costly run-off elections, which tend to have extremely low turnout and are obsolete in a system using ranked-choice voting, and should be geared to engaging historically disenfranchised groups.

Ranked-choice voting will be a “major shift” in how elections are run and “it’s imperative that we get it right,” Adams said of the new voting method where voters can select up to five candidates in order of preference during special and primary elections (but not general elections) beginning in 2021, and votes are reapportioned as needed until a winner hits 50%. “That is why we’re asking the City Council, the Speaker, as well as the Mayor of the City of New York, to allocate the necessary funds so that we can have the proper education on the ground.”

In addition to the call for city funding, Adams announced he would be holding forums at Brooklyn Borough Hall and is encouraging his fellow borough presidents to do the same in their boroughs. The speakers at the press conference also called attention to the city Board of Election’s effort to use a new paperless touch-screen voting machine, which they say is less accurate and secure than the current hybrid system, which election experts consider a “gold standard.”

The push comes amid an unfolding fiasco in the Iowa Democratic caucuses, as a newly adopted and undertested app-based reporting mechanism has failed to report the full results of the state’s voting Monday. “The Iowa debacle should be a wake-up call for how we integrate new technologies into our election systems,” Adams said in a press release Wednesday.

Ranked-choice voting allows voters to rate candidates in order of preference rather than having to cast a vote for just one, at least for New York City special and primary elections beginning in 2021. If no candidate wins a majority of votes on the first counting, the last place candidate is eliminated and their ballots are redistributed to the remaining candidates based on those voters’ second choices. The process of elimination and reapportionment continues until one candidate receives a majority of support.

Advocates say the system has a number of benefits in addition to eliminating the need for run-off elections, which currently occur after a primary election in the city when no candidate garners more than 40 percent of the vote. Ranked-choice voting reduces the risk of so-called “spoiler” candidates -- candidates who have no chance of winning but still take votes that could otherwise advantage a more viable candidate -- by not forcing voters to choose between their top choice and another alternative other than in ranking them. Supporters also say it forces candidates to adopt a broader message and appeal to voters outside their base, and that winners are ultimately indicative of more widespread support.

Ranked-choice was approved by voters last fall as part of a referendum to amend the City Charter. It came after a coalition of election reformers pushed the 2019 Charter Revision Commission, tasked with proposing amendments to voters based on public input and an analysis of the city’s primary governing document. Barring unforeseen special elections, which are called when an elected official steps down mid-term, the first races using ranked-choice voting in New York City will be the June 2021 primaries for mayor, other citywide and boroughwide positions, and the entire City Council.

The implementation will come on the heels of a slew of election changes passed by state lawmakers in 2019, including early voting and electronic poll books, and primaries moved to June.

Adams and Ampry-Samuel, both Democrats, said the focus of educational outreach should be groups that have been politically marginalized in the past.

“We need to be proactive and invest now as a city in educating our most vulnerable communities and voters to avoid disastrous errors and potential disenfranchisement,” said Ampry-Samuel, who represents parts of Bed-Stuy, Brownsville, East Flatbush, and Crown Heights and will be up for reelection in 2021.

“Black voters have been loyal to the Democratic Party for decades. It is disrespectful and a failure to our communities when we neglect to prepare them for the changes. We are now introducing new technologies and systems that can also be confusing to our aging New Yorkers,” she said.

Asked whether she would be pushing legislation to support the effort to engage historically disenfranchised New Yorkers in conjunction with the push for funding, Ampry-Samuel said: “We are working with the Council now and our advocates to make sure that we have legislation in place to make sure that our voters are protected. But in addition to that, because right now we are in the budget season and we are negotiating that city funding, we are making sure we are putting enough funding -- $10 million -- in place to educate our voters.”

“This education must be on the ground,” and should occur through “door-to-door outreach, [at] train stops, in our school system,” and reaching “our new young people who are graduating from high school and will be voting for the first time,” Adams said.

Parallel to the funding push is Adams’ plan to hold forums about the RCV as part of an effort to boost civic engagement. “The details are still being determined but we look forward to rolling these forums out soon,” Jonah Allon, a spokesperson for Adams, told Gotham Gazette.

Lerner and Adams also raised concerns on Wednesday about the city BOE’s push to get a new voting machine, the ExpressVote XL, certified for use by the New York State Board of Elections. They said the system, which uses an electronic touch-screen with no accompanying paper record, is less reliable and accurate than the current system, and has been almost universally criticized by election security experts.

The city currently uses a system in which voters mark a paper ballot that is then scanned by an electronic machine. Lerner said switching to a new system, when the current system is considered a good model, is a waste of taxpayer money.

Another caveat is the potential conflicts of interest for New York City BOE Executive Director Michael Ryan, who is accused of receiving gifts from Election Systems & Software, the company that makes ExpressVote XL, and is pushing the state board to certify the technology. Lerner’s Common Cause New York last week asked the city’s Conflicts of Interest Board to investigate Ryan’s connection with ES&S, which they say includes being flown across the country to conferences and serving on an advisory board for the company (after reporting by NY1 he stepped down from the advisory board).