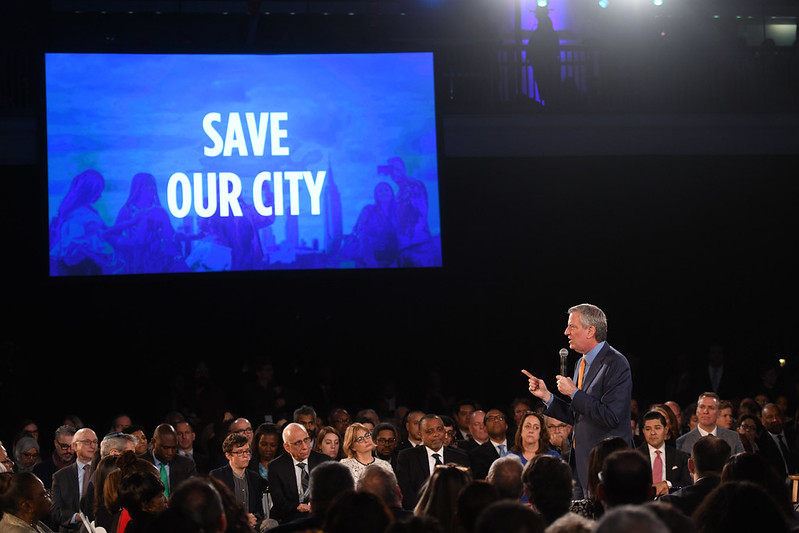 Mayor Bill de Blasio, now in his seventh year in office, unveiled his “blueprint to save our city” at his annual State of the City speech on Thursday.

Echoing a similar message from his State of the City speech last year, the mayor sought to highlight the anxiety and uncertainty among New Yorkers who feel the unending pressures of living here, whether it be the cost of doing business, providing a good life for children, worrying about the effects of climate change, or just simply paying the rent.

In a break from past speeches, de Blasio held court in a town hall-like format at the American Museum of Natural History’s Milstein Hall of Ocean Life, known for its iconic model of a blue whale suspended from the ceiling. De Blasio stood dead center surrounded by rows of white chairs, rather than speaking from a lectern, and though he did not field any audience questions, it was more of an interactive performance than prior speeches.

“I felt it was time for something different,” he said of the setup, which eschewed prepared remarks on a teleprompter but used a script projected on a screen as well as slides with bullet points and graphics. “It was time to be blunt. It was time for real talk.”

The mayor spoke of a sense of urgency he says he has for the remainder of his tenure, and of the fears of displacement that he encounters in New Yorkers across the city. “Every town hall meeting I go to, every conversation I have more and more turns to the same problem,” he said. “No one wants to leave but they are being forced out. Or if they haven’t been displaced yet, it’s a constant worry,” he said. “The challenge now is not crime, the challenge now is greed. Greed that is afflicting all of us.”

“From making Pre-K universal, to creating the safest big city in America, we have accomplished so much together, but we need to go much farther," de Blasio said in a statement released just before he took the stage, where he was introduced by his wife, Chirlane McCray. "We must make New York City easier to afford, protect the mom-and-pop businesses that make New York, New York, and hand this city back to the people who make it so great.”

Seemingly taking stock of a storefront vacancy crisis, as small businesses close down in the city, de Blasio announced several measures that he said would aid about 28,000 businesses. He said the city would invest $500 million from the city’s $215.5 billion pension fund system into local businesses. He pledged to push for a Landlord Vacancy Tax before the state Legislature, to pressure landlords into renting their properties to small businesses rather than wait for tenants that can pay higher rents. And he announced that he would create a “Blue Ribbon Commercial Rent Control Commission,” tasked with crafting ways to shield businesses from exorbitant rent increases, with a deadline of delivering recommendations by the end of the year.

The mayor touted the success of his administration’s push to cut fines on small businesses, as much as 40% so far, he said, and promised to continue that effort to reach 50% by the end of his tenure. It will have put $26 million back into the pockets of business owners, he said.

He also promised a slew of measures to assist small businesses, including expanding small business navigators that can help with permits and licenses and providing free legal services and low-interest loans to low-income business owners.

The mayor has repeatedly touted the success of his housing plan – according to city data, the administration has created and preserved 147,933 units of rent-restricted housing through December 31, 2019 – but amid ongoing criticism that the housing is not affordable enough for low-income New Yorkers and after several resets and course corrections already, he announced yet another on Thursday. Calling it “Your Home NYC,” the mayor outlined several initiatives in the next phase of his housing program.

De Blasio said the city would help keep another 78,000 New Yorkers in their affordable homes, after having already done this for 255,000 people. He said half of all new homes built with city financing would be set aside for families with an annual income of less than $50,000, and that half of those would go to families with an annual income of less than $30,000. He estimated that would create 2,000 additional new units for low-income residents than previously outlined in his 12-year, 300,000-unit plan, though not adding to the sum total.

Exerting leverage over homes financed with city money, the mayor said the city would offer renters the choice to either pay security deposits up front or allow monthly installments through a renter security insurance program, which he said will start with 60,000 homes.

He also said he would push the state Legislature to expand tenant protections, including the security deposit measure, for the roughly 2.5 million New Yorkers that don’t live in rent-regulated apartments, building on the ground-breaking tenant-friendly legislative package approved last year in Albany.

De Blasio said his administration would further support Community Land Trusts to allow communities to invest in development and build wealth, and said he would push to legalize basement apartments to create 10,000 legal affordable housing units over ten years. He said the city would provide low-interest loans to homeowners choosing to convert their basements.

In a somewhat controversial move, the mayor’s new NYPD Commissioner, Dermot Shea, announced late last month that the department will deploy 300 Youth Coordination Officers across the city as a measure to prevent youth crime. De Blasio touted that initiative in his speech and said he would build on it with several youth safety measures including expanding opening hours at recreation centers and providing free membership to young people, reopening six closed community centers and building seven new ones. He also said the city would install new safe streets infrastructure around schools – 1,000 new stop lights, signs, and speed bumps in total.

He also announced the creation of a new 100-member NYPD Vision Zero unit to increase traffic enforcement and continue to reduce traffic-related fatalities amid an increase in pedestrian and cyclist deaths.

A signature early achievement of the mayor was his universal pre-kindergarten program, which he expanded on with a “3-K for All” plan to eventually provide early childhood education to all 3-year-olds. The mayor boasted of its success, as he noted that the 3-K program will roll out to another four school districts in September, which will mean coverage of half of all school districts.

De Blasio committed, or rather predicted, that the city’s school graduation rate would reach 86% by 2026, up from 77.3%, surpassing the nation’s average five years after he leaves office. He said the Department of Education would increase its focus on performance metrics to identify trends and send resources where they are required, in part through enhancing the use of the new EduStat program that the DOE has modeled after the NYPD’s CompStat that uses data analysis and accountability through the chain of command. And he announced a goal of placing 1,000 new men of color in teaching positions by 2022.

The mayor also spoke of another early childhood care initiative which was first announced by First Lady McCray on Wednesday – a new $43 million program to provide home visiting services to all first-time parents by 2024. The program is expected to launch in Brooklyn this year and next, before moving to other boroughs.

The speech contained an ambitious expansion of the de Blasio administration’s “Green New Deal” efforts, first launched by the mayor in April last year, to make the city carbon neutral.

The mayor unveiled several new plans. He said the city will create a new wind power hub at the South Brooklyn Marine Terminal in Sunset Park, for staging, installing and operating turbines. The hub will add 500 green jobs, the mayor said.

The city will also launch an initiative to increase the use of solar power, allowing homeowners to defray costs of installing solar panels by paying out of savings on their energy bills over the course of years. He said the city would help install panels on 50,000 homes, creating 5,000 green jobs.

Using the authority afforded by his office, de Blasio signed three executive orders on the spot – to end the purchase of single-use plastic bottles by city agencies and restrict the sale of those bottles on city property by next year; to mandate that all city vehicles be electric by 2040; and to codify the city’s policy of divesting from fossil fuel infrastructure and ensuring no new fossil fuel infrastructure projects are approved in the city.