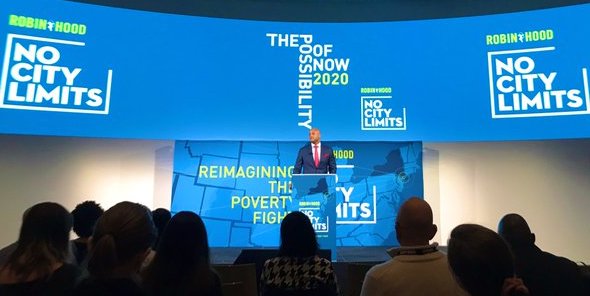 Not nearly every New Yorker has benefited from the unprecedented economic expansion that the city has experienced in the last decade since the Great Recession. While official city and federal measures show that employment is high and the poverty rate has continued to decline over the years, a new report from the Robin Hood Foundation and its partners shows that the reality is far more insidious than other numbers may indicate.

According to the report, half of city residents observed during a yearslong study had lived below the poverty line in at least one of the last four years, and black and Hispanic New Yorkers were more likely to have experienced poverty.

In October, Mayor Bill de Blasio took a victory lap over new American Community Survey data that showed the city’s poverty rate had fallen to an all-time low of 17.3% in 2018, down from 20.9% in 2013. Over the same time, median household income increased by 13%.

“I was elected on a promise to end the Tale of Two Cities and that’s exactly what we’ve spent every day of the last five years working to do,” de Blasio said at the time. “Poverty in New York City is at historic lows. From fighting for a $15 minimum wage to guaranteeing Pre-K for every child to Paid Safe and Sick Leave, we are putting more money in the hands of working families and creating a fairer city for all.”

New York City has its own annual measure to calculate poverty, which takes into account additional metrics that are particularly pertinent in the city – the cost of housing and healthcare, and government benefits such as food stamps and tax credits. It usually shows poverty at a higher level than the federal measure (which is based on pre-tax cash income and doesn’t take into account local factors, like cost of living) and the last time the city’s measure was released, in June of 2019, it showed 19% of New Yorkers living in poverty and 43.1% living near poverty in 2017, down from 20.7% and 45.9%, respectively, in 2013, the year before de Blasio took office.

The mayor boasted of having raised 230,000 New Yorkers out of poverty or near poverty in his first term and said his administration was on track of meeting a ten-year goal of helping 800,000 New Yorkers. The city’s next report is meant to be released this spring.

Robin Hood’s Poverty Tracker, a collaboration with Columbia University’s Center on Poverty and Social Policy (CPSP) now in its second year, examined 4,000 New Yorkers about every three months between 2012 to 2018 to more holistically gauge the city’s sustained challenges with tackling poverty. The report judges poverty based on the U.S. Census Bureau’s Supplemental Poverty Measure, which includes factors such as spending on food, clothing, shelter, and utilities, and housing costs - it differs for homeowners and renters. It is slightly different from New York City’s poverty measure. The Tracker also collects data on not just income but “core measures of disadvantage, material hardships and health problems,” as well as assets and debts, consumption patterns and social service program utilization, according to the report.

The report, released at a day-long Manhattan conference on Thursday, found that between 2015 and 2018, half of adults in New York experienced poverty in at least one of the previous four years.

“There are many single-year datasets that measure the poverty rate and show how many New Yorkers live below the poverty line, but these studies don’t provide information on the other forms of economic insecurity that people face, or how their circumstances may have changed over the past year,” said Sophie Collyer, a research director at CPSP, who co-authored the report, in a statement. “By collecting longitudinal data on several measures of economic disadvantage and well-being, the Poverty Tracker reveals that standard snapshots of poverty and disadvantage fail to capture the magnitude of challenges New Yorkers face.”

Individuals were driven into poverty by common, life-changing events, the report found. “What this report pinpoints is that things that pretty much every New Yorker will experience for the most part – losing a job, having a child, ending a relationship – are driving basically one out of every two New Yorkers into poverty,” said Jason Cone, chief public policy officer at Robin Hood, in a phone interview. He said the Poverty Tracker is “complementary” to the city’s poverty measure and its data is regularly shared with city officials.

Among the stark findings of the report is that poverty and hardship have a “strong racial and ethnic dimension,” Cone pointed out. About 59% of black and 68% of Hispanic New Yorkers were living in poverty in at least one year between 2015 and 2018. What’s worse is that 35% of those escaped poverty returned to it the next year.

“This Poverty Tracker underscores the urgent need for meaningful and sustainable economic mobility,” said Wes Moore, CEO of Robin Hood, in a statement. “We can clearly see how effective policies reduce the poverty rate and how pervasive poverty is over time. With this data, grantmakers, policymakers, and community members have the tools and information necessary to better understand the problem we’re working together to combat.”

Education, or lack thereof, was the most significant determining factor for individuals who fall into poverty after having a child. Those with only a high school degree or less were almost five times more likely to experience poverty than someone with a bachelor’s degree.

“Our public policies need to account for that,” Cone said, noting the high cost of everything from housing to childcare in New York City.

Cone did praise the mayor’s efforts to tackle poverty, which are mostly limited by virtue of the policies he can enact. Case in point, the increase in minimum wage to $15 per hour, which the city has touted as a significant factor in lifting people out of poverty, was an issue on which the mayor and his allies were advocated but was a matter of state law.

De Blasio has successfully enacted universal pre-kindergarten and is ramping up early childhood education for three-year-olds. He launched and repeatedly modified an ambitious housing program meant to build and preserve rent-restricted apartments with set asides for the poorest New Yorkers. The city is now funding free legal assistance to help tenants avoid eviction. De Blasio implemented and expanded paid sick leave. Just this week, the mayor was in Albany, urging state lawmakers to protect the city from proposed state cuts to Medicaid and the Temporary Assistance for Needy Families program.

But short of greater state and federal assistance, the mayor has little power to affect the overall state of the economy and the inequality rampant in the city.

“The poverty tracker study just sort of paints just an even more dire picture of the need to invest in those kinds of public policies,” Cone said.

“Most New Yorkers ride the subway on a given day and the person sitting across from you, if not yourself or a family member, has experienced poverty in the last four years,” Cone added, “and in the largest city in the United States that is a striking and startling statistic.”