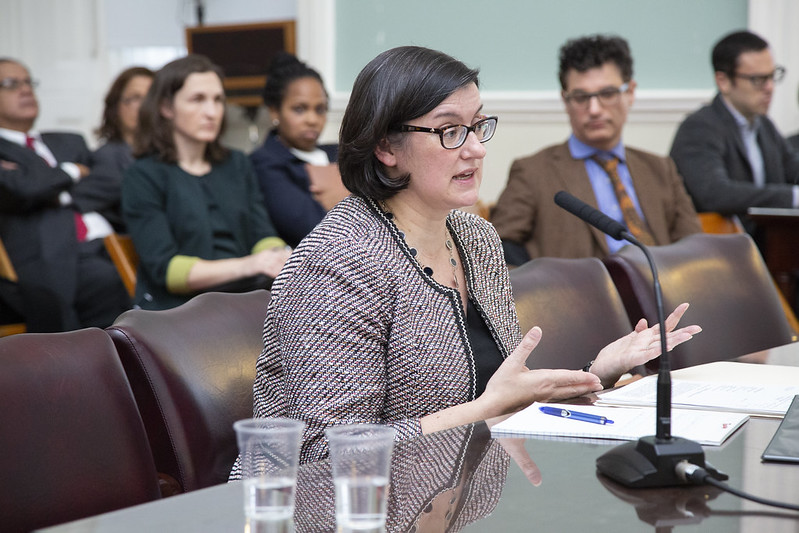 The Department of Investigation, an independent city agency that monitors and investigates government corruption, waste, and mismanagement, has yet to complete thousands of background checks on workers currently employed in city government. At a hearing of the City Council’s Committee on Oversight and Investigations on Monday, DOI Commissioner Margaret Garnett sought to explain why the agency had fallen behind and assured Council members that the problem would not carry on into the future.

As of Friday, February 21, DOI had 5,122 backlogged background check applications from city agencies, down from about 6,479 on July 1, 2019, Garnett testified. She pledged that DOI “is successfully shrinking the massive backlog that had been growing for years and remains committed to eliminating it within four years, if not sooner. This issue is among my top priorities.” By that timeline, Garnett apparently meant from the time of her appointment last year.

Council Member Ritchie Torres, a Bronx Democrat who chairs the committee, said the backlog “is not only an embarrassment but it’s a threat to the integrity of city government.” He noted that backlog came under scrutiny in recent months after David Hay, a high-ranking official at the Department of Education whose file was included in that backlog, was arrested in Wisconsin in December on charges of seeking sex with a minor. Hay did undergo two checks by the DOE and Garnett has insisted that, even if her agency were to have conducted a background check, it would not have necessarily surfaced the red flags that were found in Hay’s past (he misrepresented certain facts in his file, only found through a subsequent investigation by the Special Commissioner of Investigation at the DOE).

Torres also cited the example of Kevin O’Brien, a former aide to Mayor Bill de Blasio who was fired after facing allegations of sexual harassment. O’Brien had previously been fired for the same reason from a job at the Democratic Governors Association, a fact that he lied about in a background check questionnaire. Garnett said it would have been hard to identify O’Brien’s red flags because the case involved a non-disclosure agreement (NDA) and he committed “perjury” by not disclosing it on his questionnaire.

“What I want to hear from DOI is a diagnosis of what went wrong,” Torres said in his opening statement. “Why was the Background Investigations Unit allowed to atrophy from neglect?”

Garnett made it clear that the backlog she inherited was a “shock” and that it seemed to stem largely from the department being woefully understaffed to handle the massive uptick in city hiring after de Blasio took office. She said she has been attempting to cut down that backlog since she took over as commissioner early last year, making it her priority to hire new investigators and restructure the Backgrounds Investigation Unit, she said.

The backlog increased from about 2,000 in the summer of 2014, de Blasio’s first year in office, to about 6,400 by April 2019, while DOI’s background investigation staff only saw moderate increases. “The current circumstance is shameful. It is a dereliction of DOI’s responsibility to the hiring agencies and to the city as a whole,” Garnett said.

The department also added 13 new positions with additional funding last year to create a team dedicated solely to resolving the backlog, while ensuring that a separate 28-person team completes all new background checks within six months of receiving an application from a city agency. Since July 1, the latter team has completed 766 new background investigations in an average of 71 days, Garnett said.

Garnett said she is taking additional steps to further reduce the backlog while maintaining a balance between the “objective” and “subjective” triggers for an investigation. One “objective” trigger is a salary of $100,000, which Garnett said she is considering increasing to $125,000. She said she would also tweak the categories of managerial employees that are currently subject to background investigations to narrow it somewhat. She also said the department is updating how the “subjective” criteria are defined, which cover employees such as those who have access to sensitive information-technology infrastructure and those who have the authority to negotiate and approve contracts, permits, and zoning applications.

She also seemed open to legislative fixes to the background investigation process. City agencies only send background check applications after making a hiring decision, and then help applicants fill out their forms before sending them to DOI. That means an agency employee could be on the job for months before DOI unearths any information that could mean they should not have been hired or are fired or disciplined.

Torres suggested that perhaps some aspects of the background check process could be preconditions for hiring. Garnett said fingerprinting and a criminal history check would be feasible. “We could accommodate it logistically if the agencies were willing to partner with us in doing that,” she said, emphasizing that “the agencies really control the pipeline.”

She also said she didn’t have “any inherent objection” to creating statutory timelines for background checks going forward, though she said that doesn’t apply to the backlog. “I would resist a legislative mandate regarding the backlog...Legislation’s kind of a blunt instrument,” she said.

Garnett cautioned against the approach, pointing out that DOI seeks any and all adverse information about a city employee, and that narrower questions could lead to limited answers. “I don’t think that privileging sexual harassment allegations over the range of other corruption vulnerabilities that are our primary focus, is the way to go.”