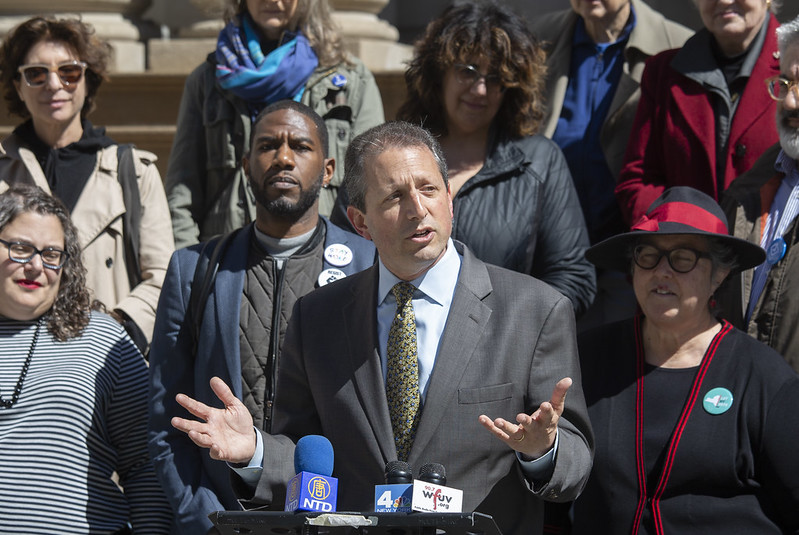 Brad Lander and others in support of ranked-choice voting (photo: John McCarten/City Council)

City Council Member Brad Lander, a Brooklyn Democrat, is introducing legislation on Thursday that would close a loophole in city campaign finance law that currently allows groups to hide their donors when they try to influence voting on a ballot referendum.

The city’s campaign finance law is fairly robust, having been updated repeatedly over the years to reduce the effect of big money on politics, including independent expenditure groups that seek to sway elections. But the law only requires independent expenditure committees to disclose their contributors to the Campaign Finance Board when they spend money to favorably or negatively affect a candidate’s campaign for elected office. The law does not require that for ballot measures, such as the five that were approved by voters in November of last year.

The five ballot questions, created by the 2019 New York City Charter Revision Commission, encompassed 19 specific proposals related to issues of police oversight, land use policy, civic engagement, budget procedures, and election reform. Three outside groups together spent nearly $1.3 million to affect how New Yorkers voted on some of those questions, but the sources of that money do not need to be disclosed under current law, something Lander’s bill seeks to address.

The vast majority of that spending, about $1.1 million, came from the Committee for Ranked Choice Voting NYC, which supported the first ballot question that established ranked-choice voting in some municipal elections. The committee was backed by, among many others, good government groups that have generally been supportive of election and campaign finance reform. Common Cause New York, the leading group behind the ranked-choice voting push, supports the legislation and was involved in drafting its language, according to Lander’s office.

The New York City Council’s Black, Latino and Asian Caucus spent $5,000 to oppose that first question. Another independent expenditure committee associated with the Police Benevolent Association, the union representing rank-and-file police officers, spent a total of $158,406 in opposition to every ballot question. Most of that spending, $139,870, was directed at the second question, which gave greater powers to the Civilian Complaint Review Board (CCRB), a watchdog agency that investigates allegations of abuse of power and wrongdoing by officers.

None of the groups were required to report how they had raised their funds and from whom. Taking notice of that loophole, which was also criticized by the New York Daily News editorial board, Council Member Lander told Gotham Gazette soon after the election that he intended to introduce a bill to amend it.

“In 2014, on the heels of the Supreme Court’s disastrous Citizens United decision, we created the strongest disclosure law for independent expenditure spending on behalf of candidates,” he said in a statement this week. “We’ve already seen evidence that it is working to reduce opaque spending to promote or oppose candidates. Now, we’re taking the next step to bring the same transparency to ballot propositions on the other side of the ballot.”

Lander’s bill would require any independent expenditure committee that spends more than $1,000 on a candidate or ballot referendum to disclose the expenditure to the New York City Campaign Finance Board. It would also require the identification of any individual who gives more than $1,000 to an independent expenditure committee and that a committee that spends more than $5,000 in the year before an election to impact a candidacy or ballot measure disclose the entities that contributed to it, as well as the “owners, partners, board members and officers” of those entities.

It also mandates the disclosure of the identity of any individual who gives $25,000 or more to an entity that contributes more than $50,000 to an independent expenditure committee. The disclosure requirement would also extend to literature and election ads. The bill would take effect on January 1, 2021.

Campaign Finance Board Executive Director Amy Loprest applauded the bill. “New York City’s disclosure laws are the strongest in the country, and this legislation will mean that voters have full transparency when independent groups try to influence the outcome of a ballot initiative,” she said in a statement.

Alex Camarda, senior policy advisor of Reinvent Albany, another good government group that supported popular passage of ranked-choice voting, said in an email, “We support making the donors to campaigns regarding ballot proposals more transparent, and appreciate Councilmember Lander focusing attention on this gap in the city's campaign finance laws.”