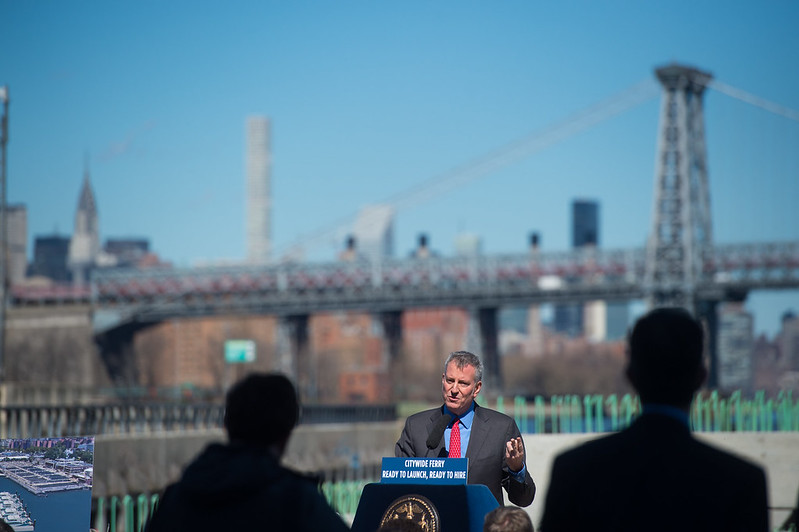 What was ostensibly meant to be a City Council hearing on the proposed preliminary budget for the Department of City Planning on Tuesday turned into a debate about the de Blasio administration’s approach to neighborhood rezonings. Several Council members expressed their displeasure with rapid gentrification and resident displacement, and what they believe are the city’s insufficient efforts to stop those trends while at times exacerbating them through rezonings, while Mayor Bill de Blasio’s planning chief, Marisa Lago, defended the administration’s approach to housing and community development.

At a hearing of the City Council’s Committee on Land Use, chaired by Council Member Rafael Salamanca Jr. of the Bronx, Lago -- who is the director of the Department of City Planning and chair of the City Planning Commission -- found herself on the defensive as she explained the administration’s strategy behind its neighborhood rezoning plans, which undergird de Blasio’s 12-year plan to build and preserve 300,000 units of rent-restricted housing. DCP plays a central role in that rezoning process, while the City Planning Commission winds up voting to approve or disapprove the proposals that make their way through the city’s land use review process.

Since 2016, the administration has successfully moved six large-scale neighborhood rezonings, which involve changing land use regulations to create more housing density while mandating inclusion of affordable housing in new, larger developments, as well as provide a slew of infrastructure and community investments such as libraries, schools, community centers, parks, and more. The rezonings also often change land use regulations related to commercial and manufacturing space.

But those rezonings have been focused in low-income communities of color, an approach that has been criticized for exacerbating existing displacement pressures and accelerating gentrification that is already underway, though the mayor and his top housing deputies have repeatedly argued that the rezonings are often the best way to mitigate the effects of market forces already taking hold in certain communities.

So far, rezonings have been approved in East New York, Brooklyn, East Harlem and Inwood in Manhattan, Jerome Avenue in the Bronx, Downtown Far Rockaway in Queens, and the Bay Street corridor on Staten Island. (East Midtown in Manhattan was also rezoned but was aimed at revitalizing a commercial district rather than aimed at building housing.) The Inwood plan has been halted by a judge, however, the subject of an appeal by the city. Other proposed neighborhoods for rezonings, including part of Flushing, were shelved before the planning process really got going, largely due to local opposition.

When asked which rezonings could be certified by the time de Blasio’s tenure is up, Lago seemed confident that one in Gowanus, Brooklyn would go through. She was cut off before she could name any other neighborhoods that have been identified for a rezoning but have yet to move.

If the administration were to stop rezoning wide swathes of neighborhoods, market-rate “as-of-right” housing would continue to be built, Lago said.

As she explained at the hearing on Tuesday, 80% of housing construction in the city takes place “as-of-right,” which involves private development where the city does not have a role to play. “New housing,” she said, is “disproportionately built in the city’s most affluent neighborhoods – 30% of new units since 2015 have been in the 20% of neighborhoods with the highest median incomes. These neighborhoods are also getting a proportionately large share of new affordable housing – 20% of new affordable units have been built in the most affluent 20% of neighborhoods.”

Acknowledging that its affordable housing plan needs to create deeper affordability, the administration has reset its housing program multiple times, most recently by expanding the number of units that will be set aside for the lowest income and homeless New Yorkers, Council members have repeatedly said the rezoning plans don’t create enough housing that is affordable for the current residents of the neighborhoods involved.

That’s also why some Council members have sought to downzone parts of their districts in neighborhood rezonings, to preserve the character of their communities and prevent the kind of rapid development that they fear will lead to rising rents that push out long-time residents.

“Does City Planning not care about keeping the character of neighborhoods intact?” asked Salamanca, who recently put the kibosh on a potential rezoning in part of his district.

Lago pushed back on the suggestion, noting that downzonings limit the city’s ability to spur the building of more affordable housing. “As a department that looks citywide, and a city that is growing, and in a city that has an affordability crisis, we need to recognize that the solution is not to stop housing construction,” she said.

That was a central divergence point that led to the abrupt stalling of the city’s effort to pursue a neighborhood rezoning in Bushwick, Brooklyn. In January, the city halted the environmental review process for the proposed rezoning after rejecting a request by elected officials and community activists to consider an alternate, community-based plan. The Bushwick Community Plan, which was years in the making, was “in essence, a downzoning,” Lago said at Tuesday’s hearing, citing the words of Vicki Been, the deputy mayor for Housing and Economic Development.

Council Member Antonio Reynoso, who represents Bushwick, disagreed, as he has before, and delivered the harshest criticism of the hearing. Reynoso condemned the city’s decision to walk away from the Bushwick Community Plan and questioned why the administration was instead interested in a plan that would lead to more displacement through development of what he sees as too much new market-rate housing. “At this point, it just doesn't seem like you're playing a fair game with the community, and asking us to engage in a system where the outcomes are only what you want and nothing else,” he said.

Lago emphasized that the displacement Reynoso fears would happen regardless. “We are seeing displacement occur with or without rezoning,” Lago emphasized, noting that the city’s approach has been to prevent displacement through various other means including free legal services to low-income tenants facing eviction and anti-tenant harassment measures, among others.

Lago particularly leaned on that argument when Salamanca questioned whether DCP supported legislation he has proposed along with Public Advocate Jumaane Williams to require a racial impact study with city-sponsored rezoning proposals. Lago did not directly say she supported the legislation. “We very much agree on the need critically to analyze land use actions, and we also need to analyze the status quo and what is happening, even in the absence of a discussion about rezoning,” she said.

“I would welcome the opportunity to engage with the Council on identifying whether there is a causality between racial displacement and rezoning,” she added.

Some of the criticism of DCP stemmed from housing and zoning decisions made well before Lago took over as planning chief, and almost a decade before de Blasio became mayor. Council Member Stephen Levin, for instance, noted that the Williamsburg-Greenpoint rezoning approved in 2005 under former Mayor Michael Bloomberg did not lead to the many projected improvements that city planning officials had predicted at the time. DCP released an analysis of the long-term impacts of the rezonings last year and he asked the department to conduct similar analyses of other rezonings.

Council Member Mark Treyger echoed Levin’s sentiment in forceful tones, noting that a Coney Island rezoning from 2009 had similarly failed to promote robust economic activity as envisioned and that current residents cannot wait for a decade for affordable housing to be built. “The reason why I'm bringing this to the attention of DCP is because it was your agency and others that sold my community a bag of goods about the 2009 rezoning,” he said, calling for remedial measures to help fix the problems the rezoning created.

“Michael Bloomberg failed Coney Island and we need to address the crisis my constituents face right now,” he said.