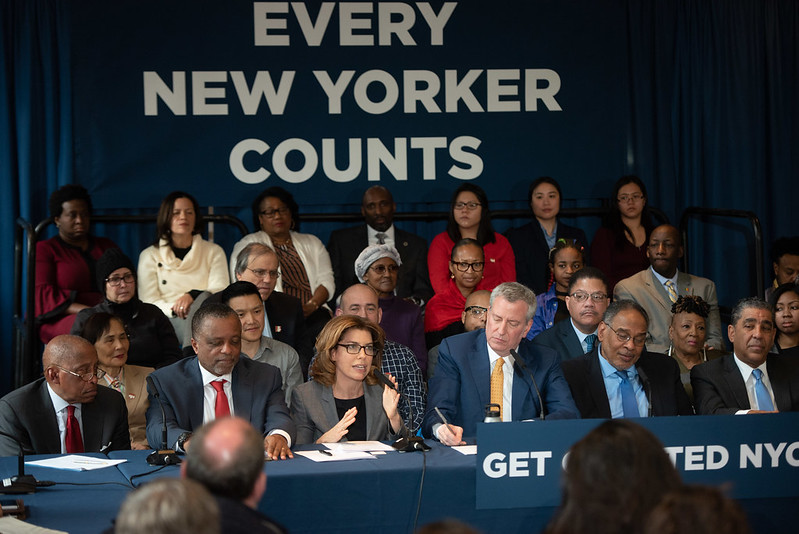 New York City has reached a first-of-its kind agreement with the U.S. Census Bureau to transfer data on the city’s sheltered homeless population in a way that is intended to negate the need for census enumerators to perform their own separate count.

Through the agreement, which was described to Gotham Gazette by an official from the city’s census office, the city will compile data on the roughly 60,000 people expected to be sheltered at around 650 sites in the five boroughs as it stands on a particular designated night. The data will then be provided to the Census Bureau via a secure file transfer protocol.

The information will include all the city has available to fill out standard census details like name, age, sex, and address (which will be the address of an individual’s shelter). Like the rest of the information collected as part of the once-in-a-decade count, it will be protected from release by federal law and cannot be shared with other components of the federal government, such as immigration enforcement authorities.

“This plan will ensure that every single homeless person in New York City is properly counted while also accounting for community health care needs during the COVID pandemic,” said Julie Menin, the director of New York City's 2020 Census office, referencing the ongoing global public health crisis caused by the novel coronavirus. The discussions between the city and the Census Bureau preceded the onset of the pandemic, but the agreement has proved particularly auspicious as the virus frustrates census outreach efforts.

Typically, the Census Bureau takes two separate and complementary approaches in attempting to count an area’s total homeless population: there’s a count of the “unsheltered” population, which includes people staying in informal spaces like subway stations, outdoor encampments, and parks, and a count of the “sheltered” population, which includes those staying at formal homeless shelters.

For this latter phase, known as the Service-Based Enumeration (SBE), census employees coordinate directly with shelters and service providers like food pantries to arrive in-person and conduct interviews with residents and clients. At shelters, their goal is to count or at least estimate the total number of people in that facility on the day they visit (this year, the SBE was slated to run between March 30 and April 1, but has been postponed).

Since 1981, homeless New Yorkers have had a legal “right to shelter,” which has meant that the vast majority of the homeless population is in sheltered as opposed to unsheltered situations, with the street population estimated at a comparatively low 3,600. (In terms of the overall homeless population, the federal Department of Housing and Urban Development has estimated a higher number than the city, closer to 80,000, which accounts for a wide variety of shelter settings, not only those run by the city’s Department of Homeless Services.)

This makes the SBE particularly important for getting an accurate count of the city’s population and its demographics and living situations. However, recent events have presented a cascade of complications, starting with the Trump administration’s general posture of hostility to immigrants and its very public attempts to add a citizenship question to the census questionnaire, which were ultimately blocked by the courts.

Paired with initiatives like the public charge rule and the administration’s attempts to cut food stamps and other social service programs, city officials came to believe last year that federal employees of any stripe might be viewed with suspicion in the shelters, and they wouldn’t be able to get an accurate count.

“The very notion that federal officials would be able to have access to our shelter sites was essentially a non-starter for all of our providers,” said one city census official speaking on background. “We knew for a fact that the Census Bureau's proposed approach was not actually going to yield them the results that they wanted.”

Shelters are operated by nonprofits under contract with the city to provide services to distinct populations, such as families with minor children or single adult men or women. Intake is handled centrally by the Department of Social Services (DSS) and its component Department of Homeless Services (DHS), which then refers applicants to particular providers. As such, the city possesses pretty granular and real-time data on the shelter population, including all the data points that form the basis of the census count.

Ian Hull, the deputy regional director for the Census Bureau’s New York region, said that the Bureau had been very open to the idea when city officials broached it last year, in part because they agreed that it would yield better data. “Oftentimes, when we go to shelter, people are not interested in doing a one-on-one interview, which is one of the enumeration methods… in that case, we just do headcount,” he said. “[DSS/DHS] actually have more data, and so they should be able to provide us things that we're normally seeking, such as age, date of birth, race and ethnicity, things such as that.”

The agreement now proves particularly opportune as the Bureau, and society at large, contends with the global pandemic set off by the novel coronavirus, an aggressive pathogen that spreads primarily through person-to-person contact, including through infected but asymptomatic people. The virus has spread quickly in New York City, with over 3,600 confirmed cases as of Thursday morning even as testing has lagged.

On March 15, the Bureau announced changes to the way it would conduct Group Quarters counts, which include sites like college dormitories and nursing homes; on March 18, Census Bureau Director Steven Dillingham announced that all field operations would be suspended until April 1, including the SBE. The original snapshot date for the city’s data transfer to the Census Bureau was March 31, but the postponements mean it will be pushed back. Hull said that the SBE had to “count everyone nationwide on basically the same three day period,” and it was unclear when exactly that would take place.

Census employees moving across shelters and interacting with large numbers of people who are themselves occupying shared spaces with dozens of others could be a perfect storm for disease propagation. However, under the agreement, enumerators would never have to enter the shelters at all, and could simply rely on the city data.

The fact of such a data transfer occurring isn’t itself unprecedented. “Other cities and other shelters have the ability to provide the data to us administratively,” said Hull, and some number of them do every count. However, this appears to be the first time a city, and certainly the largest city in the nation, has reached a specific bilateral agreement with the Bureau outside of its standard data transfer systems, partly on account of the sheer amount and complexity of the transfer. “From those standpoints, it’s definitely a one-of-a-kind of agreement, but I think it's important to note that the actual enumeration method, if you will, is not,” he said.

While the model is promising in some ways, under current circumstances the precedent is of somewhat limited applicability. By and large, the Census Bureau attempts to gather information for every American household, and only attempts group counts in limited circumstances, like for homeless populations and senior homes. Enumerators will still have to go apartment-to-apartment for households that don’t respond, presumably once the extant threat of the virus has abated. This is the first year the Census is being conducted online-first, with most households encouraged to go straight to the internet to fill out the questionnaire, and more than 10 million across the country have done so already.

The agreement between the city and the Bureau on the homeless shelter population could set a precedent other municipalities could attempt to follow. Amit Bagga, the deputy director of NYC Census 2020, told Gotham Gazette, “we found that the process of working with the Census Bureau to be incredibly collaborative and productive,” largely because, at a time when New York and the federal government are locking horns over all sorts of public policy issues, the interests of the city and the interests of the Census Bureau aligned.