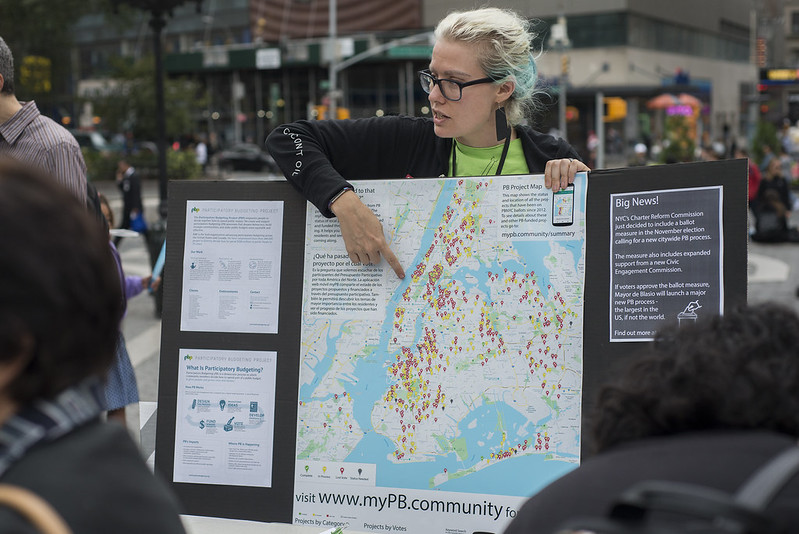 Participatory budgeting was due for a big increase (photo: Jeff Reed/City Council)

A new citywide participatory budgeting program, whereby New Yorkers directly decide how to spend city budget money, was meant to be in place by July 1 but may end up being severely limited as the city suffers from the coronavirus pandemic and its multifaceted fallout.

Creating the participatory budgeting program was one of the core duties for the New York City Civic Engagement Commission, which was established in the city Charter through a ballot referendum in 2018 that was overwhelmingly supported by voters.

The new program would be based on the New York City Council’s annual participatory budgeting cycle, wherein participating Council members voluntarily decide to allocate at least $1 million in capital funding to a process allowing their constituents to suggest and vote on projects to receive that funding. Capital funds are used for public infrastructure projects like improvements to parks, libraries, and schools. Out of 51 Council Members, 32 of them implemented the program in their districts last year.

The Civic Engagement Commission was meant to take participatory budgeting citywide. It created an advisory committee, which, along with several advocacy groups, called on the mayor in February to set aside a $500 million budget for the new program. His preliminary budget released in January contained no funds for it, and neither did his executive budget proposal that came out last month. In between, of course, the city became home to the worst COVID-19 outbreak in the country.

It’s unlikely that the new participatory budgeting program will receive anything close to what advocates had wanted. The coronavirus has decimated the economy and the city faces a $7.4 billion tax revenue loss by the end of the 2021 fiscal year. To balance the budget, the mayor already decreased planned spending by $6 billion and pulled $4 billion out of reserves in crafting his $89 billion executive budget, which is now the subject of City Council hearings as the mayor and Council head toward the July 1 deadline for a new city budget.

In an April 7 meeting of the Civic Engagement Commission, even before the executive budget was released, commission chair and executive director Dr. Sarah Sayeed conceded that the participatory budgeting program’s budget may be meager.

“As everyone probably will understand, the city is really prioritizing needs that relate directly to the public health emergency right now,” she said. “Particularly for the executive budget. I think given all the uncertainty it's going to be tough to really make a solid decision on participatory budgeting until this health crisis stabilizes.”

There’s no telling, however, whether the pandemic will abate before the end of June. Nonetheless, the Civic Engagement Commission has continued to meet with the participatory budgeting advisory committee and is in talks with the Mayor’s Office of Management and Budget, Sayeed said. “We're going to keep pressing on that front. However we're recommending, given all the uncertainty, we're looking to do a scaled-back pilot program in the first year and we are working with the advisory committee on program design,” she said.

Council Member Brad Lander, a Brooklyn Democrat who first proposed the idea of a civic engagement commission in legislation before de Blasio created a charter revision commission that put it on the ballot, proposed an alternative program that can employ expense and operational funds, at relatively low cost, instead of capital funds. “What I would love to see is a COVID response and recovery-focused pilot,” Lander said in a phone interview.

In his district, he has overseen a participatory program that distributes between $1-1.5 million in capital funds and a smaller pot of $50,000 in expense funds that has yielded “extraordinarily creative ideas,” he said, such as funding a sewing circle for domestic violence survivors, a study of the effects of climate change on bats in Prospect Park, and a menstrual equity and outreach program proposed by a middle school student.

“What it seems to me would make great sense is, alongside the Council's capital [participatory budgeting] program...let’s do a program that gives New Yorkers an opportunity to participate in the COVID recovery by coming up with some creative community-sourced ideas, developing them, and then getting to vote on some of them,” Lander said.

It would also give some degree of control back to New Yorkers at a time when so much of their lives, including their ability to vote in upcoming elections, has been disrupted by the pandemic. “I think amongst many other problems that we have right now, disengagement from democratic decision-making is definitely one of them,” Lander said.