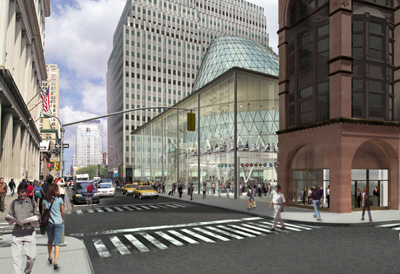 Untangling the twisted subway lines that make up the Fulton Street subway station is a problem that the Metropolitan Transportation Authority has been trying to solve since long before 9/11. But the energy for development that came in the aftermath of the attacks â€“ and the funds to do it â€“ allowed the agency to push forward the design of its own large-scale architectural project in the area surrounding Ground Zero.

The new Fulton Street Subway Station, which was presented to the public on May 26, will be funded with $750 million of federal rebuilding money. Construction will begin late this year, and the station will be completed in 2007. A public hearing on the design is scheduled for June 8. 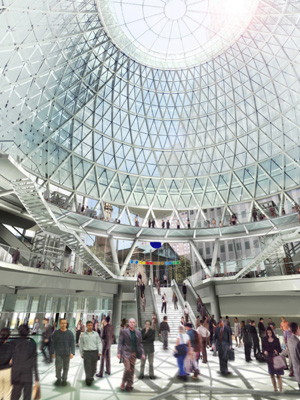 The building consists of a glass cube fifty feet tall, extending along Broadway from Fulton Street to John Street. From the center of this cube a cone, also made of glass, rises to a height of 110 feet. Several buildings will have to be condemned and destroyed.

The Corbin Building -- a nine-story building considered a skyscraper when it was built in 1889 -- will be preserved. It will be used to provide entranceways and spaces for small retail stores on the south side of the structure.

Retail stores will also be included on the second floor of the station, though details are still being worked out. The project's architects also say that some of the subway connections remain unresolved 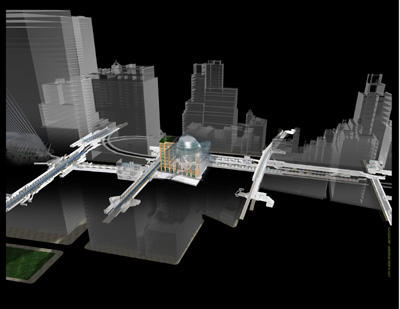 “The transit center, very much, is the tip of the iceberg,” said Andrew Whalley, who spoke for Grimshaw, the architecture firm designing the station. “It’s very much about connecting the dots.”

The dots in this case are 12 separate subway lines, spread over 1000 feet from the 2/3 station on the east to the R/W station about 1000 feet on the west. Private transit companies built these stations over a span of about 30 years in the early 1900s with no thought to a creating a coherent whole; turning the stations from competitors into collaborators has proven to be a very difficult project.

The new station leaves an opening to connect to any future 2nd Avenue Subway. It will also connect to the Ground Zero transit hub a block to the west. 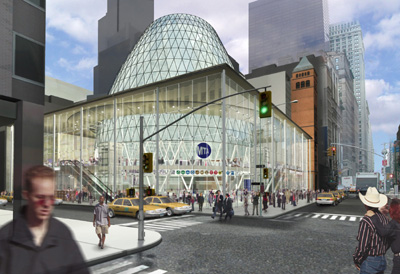 Like Santiago Calatrava, the architect of the Ground Zero station, the new Fulton Street station has been designed to bring natural light to the underground track levels. Grimshaw echoed Santiago Calatrava in saying that its design attempted to use light as a construction element.
Calatrava described his station as a pair of hands releasing a bird; Whalley said the roof of the Fulton Street station was like a glass leaf, capturing light and drawing it into the subway system.

But David Dunlap of the New York Times saw another image in the station. “New Yorkers,” he wrote, “â€¦may find it hard to resist thinking of this structure as a jeweled egg to Mr. Calatrava’s birdlike terminal.”