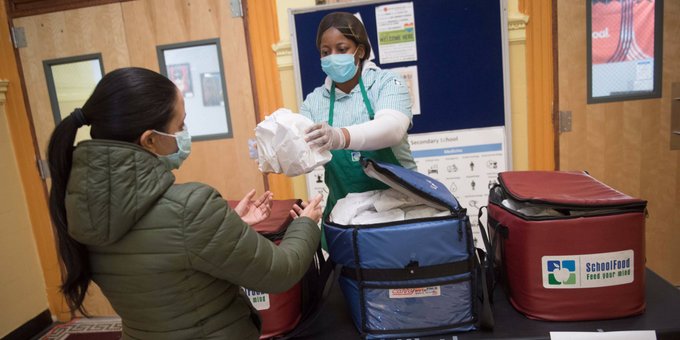 The City continues to try to meet food needs amid the coronavirus crisis (photo: @NYCHRA)

The coronavirus pandemic has put a strain on food access, with unemployment skyrocketing and increasingly more people relying on food assistance, food pantries, and meals provided by the city. Additionally, as New York City is home to many different races, ethnicities, and cultural traditions, concerns have arisen about whether the city’s massive emergency food program, including food delivery, is reflecting that diversity, causing further food stress on communities.

New York City established the GetFoodNYC hub, where New Yorkers can access various resources and information, including access to SNAP (food stamp) benefits from the Human Resources Association (HRA), a map of food pantries and Grab & Go meal sites in the city, and food delivery assistance.

Even before the pandemic and its fallout, the city was home to more than 1 million food insecure individuals, while hundreds of thousands of New Yorkers have lost their jobs since mid-March, drastically increasing the need for emergency food. New York City is home to over 1.1 million seniors, according to a 2017 report by the City Comptroller, many more of whom are homebound due to social distancing restrictions and senior center closures, increasing the need for meal delivery.

While the city has put an immense new food access program into effect, led by “food czar” Kathryn Garcia, the city’s sanitation commissioner and one of Mayor Bill de Blasio’s most-trusted aides, to serve more than 10 million free meals in April alone, challenges have emerged. One, particularly with home delivered meals, is access to culturally appropriate food such as Halal, Kosher, or Pan American meals. After some outcry, the city has taken several steps toward meeting more of these diverse food needs.

“We've been making sure there's food for every New Yorker and we've tried to also make sure that for those with a special food need that we could be responsive,” de Blasio said during an April 23 press briefing. “So, we've been creating Kosher food programs and Halal food programs to recognize that we're all in this together, we want to respect all the people, all the faiths of New York City. This is part of what makes New York City so great, that we have that mutual respect and we understand that we all come together to create something greater than the sum of the parts.”

De Blasio reiterated his promise that “no New Yorker will go hungry, any New Yorker who needs food, it will always be there for you during this crisis, your city will provide, there's no question.” He announced “there will be 400,000 Halal meals available at 32 specific Department of Education sites, remember overall we have 435 sites and I'll keep reminding people, anyone that needs food, whether it's to go to one of those DOE sites or home deliveries, whatever you need, call 3-1-1 or go to nyc.gov/getfood.”

The 32 sites would be “where there are large Muslim communities” while “another hundred thousand [Halal meals] will be distributed through partnerships with community-based organizations, food pantries, soup kitchens. So, over half-a-million meals will be distributed during Ramadan and it's a reminder, this is a place that truly believes in equality and it's something that is a profound New York City value.”

New York City is of course well-known as home to an extremely wide variety of cultures, religions, languages, immigrant populations, and cuisines, making food choice an ongoing concern when it comes to government programs, including school meals, even during non-pandemic times. Those concerns now overlap with emergency measures, and additionally so for those who require meal delivery.

“There are a number of meal types available through both the Emergency Home Food Delivery program and the Grab & Go meals at DOE sites, including Kosher, Halal, and vegetarian,” said Joshua Goodman, a spokesperson for the city’s emergency food operations, in an email to Gotham Gazette. “As we continue to grow and expand these emergency food efforts, we hope to continue to offer more. It's important to remember that this is an enormous operation, involving hundreds of staff across City agencies, dozens of contractors, hundreds of sites - we're proud to have gotten it up and running quickly, and are now seeing what we can do to continue to expand and meet the needs of more food-insecure New Yorkers.”

Kosher meals are available at 18 schools, according to the Department of Education website.

The complex needs are staggering, according to city officials. “The amount of food that’s needed to be home delivered so we can be observant of, certainty the nutrition standards, but also the cultural and ethnic needs that we have is very overwhelming,” Kate MacKenzie, director of the Mayor’s Office of Food Policy, said during a recent digital discussion hosted by Hunter College Food Policy Center.

In terms of delivery of specialty meals, new protocols have been put into place, according to City Hall, but they require in-person sign-up.

“This is self-identified at sign up, in the case of Emergency Home Food Delivery, and it is based on request at the DOE sites,” Goodman said. “We do not ask people to prove they keep Kosher or Halal, for example - people request what they need and the City provides it at no cost. Halal meals are available at every site, and the list of Kosher sites was developed in consultation with community advocates.”

During the initial rollout of the DOE program, Kosher meals were particularly hard to come by, prompting criticism from representatives of communities that need them.

“Thursday was a disaster. Friday was a disaster,” State Assemblymember Simcha Eichenstein told The Forward. “It is not acceptable to have 100 people in line, and just turn them away without food — that cannot happen in 2020 in the city of New York.”

The Middle East Eye reported that some of the initial Halal meals delivered and provided as part of Ramadan were described as “mush” and a “pile of goop,” prompting concerns about the quality of the culturally-appropriate food.

This is particularly a problem for seniors, who are receiving the bulk of home delivered meals. Seniors are likely to be homebound and under stay-at-home orders for a long time, making food access hard, given that deaths due to COVID-19 have predominantly occurred for people over 65 years of age.

“In the prepared meals for seniors, we are trying to make it so we have identified who needs Kosher, Halal, who needs Pan-Asian,” Garcia said May 7 on WNYC radio’s The Brian Lehrer Show. “In the senior center, particularly if they go through their senior center, they are able to designate more types. If you go through 311 the two options are Kosher and Halal, and then regular.”

Some seniors have struggled to attain their culturally-appropriate meals, while others have said that delivered food is a collection of snacks, rather than a meal.

“The most frequent complaints we have about the ‘meals’ are from seniors who receive a package of shelf-stable products like applesauce and granola bars, instead of an actual meal,” said Ben Thomases, the executive director of Queens’ Community House, which offers a broad network of services at 32 sites in 14 Queens neighborhoods, including meal delivery, which has increased in response to COVID-19.

“The things that are in the food boxes, they are emergency food boxes,” MacKenzie said during the Hunter event. “The contents of those boxes still adhere to the city’s nutrition standards, but they might be cans of tuna, yes there are granola bars, yes there are raisins and mixed nuts, these are intended to be emergency meal kits.” She added there would be a conversation about “the future” of the meal program, “But currently we are still feeding people emergency provisions.”

That conversation has moved ahead to some degree as the city has expanded its culturally-appropriate meal offerings.

The city is also training staff of the dozens of shuttered senior centers to enroll their members in home meal delivery. Tara Klein, a policy analyst for United Neighborhood Houses (UNH), said this could improve service, and “things are moving in a more positive direction.”

“It allows senior center staff to go in and enroll somebody directly,” she said. “It makes it a little easier for older adults to get registered and get their food. They’re also making it a little easier just to check on individuals, and see when meals are scheduled and all that.”

Thomases said differently. “The city has chosen to create a brand new food program for seniors, rather than working through its existing network of providers,” he said. “We have the capacity to further expand our meal production and delivery, but instead the city has instructed us to enroll people in the new centralized system. This system has been plagued with problems including difficulty enrolling new people, inaccurate addresses, missed deliveries, and inconsistent food quality. These types of problems are to be expected for a massive new system, which is why the city should have used its network of existing providers.”

“On [May 1] we issued an RFI, request for information, from nonprofits who might be interested in and capable of supplying that system, that GetFood system, so we can be even more responsive, particularly to different cultures and ethnic needs that we’re always striving to do better at,” MacKenzie said. She added that if a nonprofit is able to supply at least 1,000 meals per day, the city will consider doing business with it to help ease supply.

“There have been gaps in getting cultural meals, I think Kosher meals in particular were very slow to roll out, and at first some of the meals were not good quality,” Klein said. “But I think now as the city is focusing more on using nonprofits and they are attuned to the fact that there are culturally specific meals needed, things are getting a little better.”

Thomases’ organization will be answering the RFI, he said, arguing that using nonprofits will help improve outcomes. “New York City has an outstanding nonprofit sector with talented and committed leaders and staff. During ordinary times, the city relies on nonprofits to serve our communities and meet the needs of the most vulnerable New Yorkers,” he said. “All the more so, during this crisis, the city should be including non-profits in planning the rollout of new services, and relying on non-profit expertise in service delivery.”

“The city‘s response has been really impressive,” Joel Berg, CEO of Hunger Free America, said during the Hunter event of the overall emergency food response. “They have done in a few weeks what normally government would take a few years to do. There have been bumps. I’m an advocate and it's my job is always to say thank you, next, what more do we need to do.”