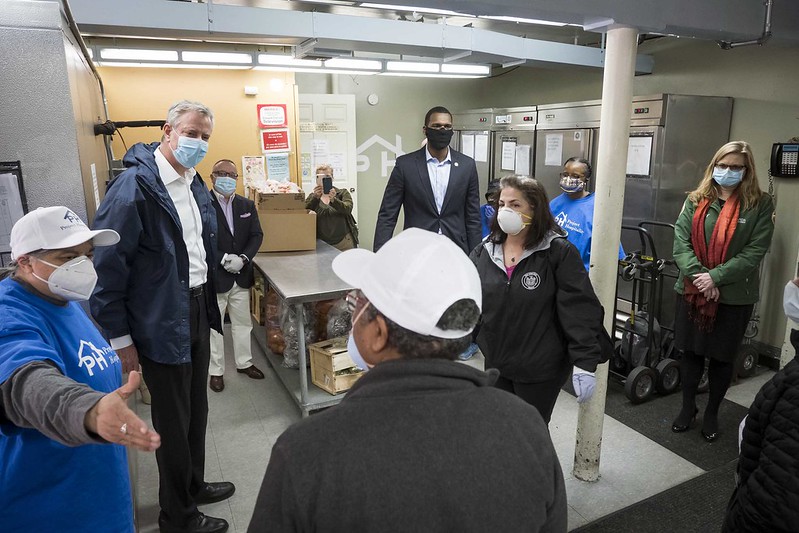 More than two months after New York officials raised alarms that the state could run out of life-saving equipment, from ventilators to rubber gloves, New York City is one purchase order away from having a 90-day worst-case-scenario stockpile of medical equipment, officials said Wednesday.

New York City Department of Citywide Administrative Services (DCAS) Commissioner Lisette Camilo told lawmakers the purchase order for ventilators was "in flight" at a City Council hearing on the agency's budget, held by videoconference Wednesday as part of the Council’s examination of Mayor Bill de Blasio’s $89 billion executive budget plan for next fiscal year and changes to the current year’s spending.

The purchase comes as part of a $1.4 billion funding increase from the Federal Emergency Management Administration (FEMA) and the Centers for Disease Control (CDC), which more than doubled DCAS' current budget, and eclipses the $1.3 billion earmarked for DCAS in de Blasio’s executive budget for fiscal year 2021. De Blasio and the Council must come to a budget agreement by the July 1 start of the new fiscal year.

The agency's budget reflects the bulk of the city's coronavirus spending, accounting for almost two-thirds of what is already well over $1 billion, on everything from ventilators to electricity. DCAS is responsible for supporting the entire city government's administrative needs, from supplying PPE to the vehicle fleet to office space to personnel matters. While the agency has already committed hundreds of millions of dollars in COVID-related expenses -- virtually all of which will likely be reimbursed by emergency federal aid -- the pandemic leaves several points of uncertainty for DCAS' budget, including future emergency spending, several ongoing projects, and the administrative infrastructure it maintains.

"In the midst of the current COVID-19 pandemic, our agency has played a critical role in supporting the continuity of government operations, as well as directly supporting the city’s COVID-19 response efforts," Camilo told the Council members who participated in the hearing, which was chaired by Queens Council Member Daniel Dromm, the finance chair, and Bronx Council Member Fernando Cabrera, chair of the governmental operations committee.

"This crisis situation has affirmed the importance of our agency’s work because DCAS is here to support every other agency and the services each provides," she said.

As of April 27, DCAS had purchased $800 million worth of medical supplies including ventilators, PPE, and cleaning supplies for city agencies including the health department and the city's public hospitals, according to City Council budget documents. DCAS custodians have been sanitizing government buildings that have remained open. And as most of the city workforce has moved to remote work, DCAS has been responsible for handling personnel issues related to time off across city agencies.

The $1.3 billion for DCAS in de Blasio’s executive budget is a slight increase over its allocation in the FY2020 adopted budget, $1.28 billion, but dwarfed by the actual spending this fiscal year because of the pandemic, which more than doubled to $2.7 billion in a matter of months, according to a City Council analysis.

When asked by Dromm how much more the agency thinks it may need for COVID supplies in fiscal year 2021, Camilo said the administration is still undertaking that analysis: "We are working together in [the Office of Management and Budget] and our partners at other agencies to determine what longer-term needs will be. So that work is currently underway and we don't yet have an estimate."

"I think it depends on a number of different things," she added. "Certainly, any federal stimulus funds will have to be resettled. It depends on whether or not there is a resurgence [of COVID-19]. There are a lot of variables that come into play but we are certainly working together to try and develop estimates for the next fiscal year."

With the city facing upwards of an estimated $8.7 billion budget hole over the current and upcoming fiscal years, officials are looking for savings virtually across the board. DCAS, with its huge portfolio of contracted goods, services, and real estate, is appetizing territory to hunt for efficiencies.

The department's adjusted and proposed budgets for the current and next fiscal years include $23 million in savings, largely due to the pandemic, of which only $6.6 million occurs in the upcoming fiscal year, with the rest in the current fiscal year, according to the Council's analysis. The department believes it will save $6.8 million in the current fiscal year "primarily attributable to project delays due to facility access restrictions during COVID-19" and another $1.3 million next fiscal year from auctioning off part of the city's vehicle fleet, Camilo said. She said DCAS officials are still in the process of finding savings, especially related to the outbreak, for Fiscal Year 2021.

Many of the savings come from projects that have been put on hold because of the state's New York on PAUSE order, including several environmental initiatives like installing solar panels and retrofitting buildings to be greener.

"Generally through this pause I think we will see savings in a lot of categories," Camilo said. "Certainly the heat, light, and power budget, certainly possibly certain fleet exercises, certain commodities that probably went down because of the work from home orders. Since agencies have a lot of their workforce working from home you might have an impact on some of the procurement budgets. It's too soon to tell or quantify that number but we do expect some savings once the books get closed overall."

A number of the most drastic changes that could be made to government life in the wake of the pandemic, like the use of city vehicles, office equipment, and even the offices themselves, fall under DCAS' purview, the lawmakers pointed out.

The largest portion of DCAS spending is on heat, light, and power in government buildings, which accounts for $714 million in the mayor's proposed budget. Several lawmakers questioned whether DCAS has considered scaling back its use of buildings in the wake of the pandemic to save money.

Allowing more telecommuting going forward "would be a tool for social distancing to be able to have more space in our workplace," Camilo said. "I don't think that there is a cost savings with regard to working from home right now."

"But in the long run it would, right, because all those that do administrative work, they can do it from home," asked Cabrera, adding: "real estate is expensive out there."

"It is certainly a possibility but if you recall a lot of our workforce are on location doing things that can't be done from home," Camilo responded.

The DCAS budget actually includes $24.9 million more in lease payments over Fiscal Years 2021 and 2022 than in the adopted FY2020 budget, according to City Council documents. When asked whether DCAS was assessing the need for leased space for non-field administrative staff, and what the costs of breaking a lease might be, Camilo said the agency was having some high level internal conversations about leasing but that the agency was looking at more, smaller-scale changes.

"Part of our discussions is to identify many of options that we would need to explore further, and that is certainly on the extreme end that will have costs, that will have complications in planning and all the other cascading effects that we have to explore and study," she said.

"But it's something that I think has to be considered in addition to all the things that might not be as invasive," she added.