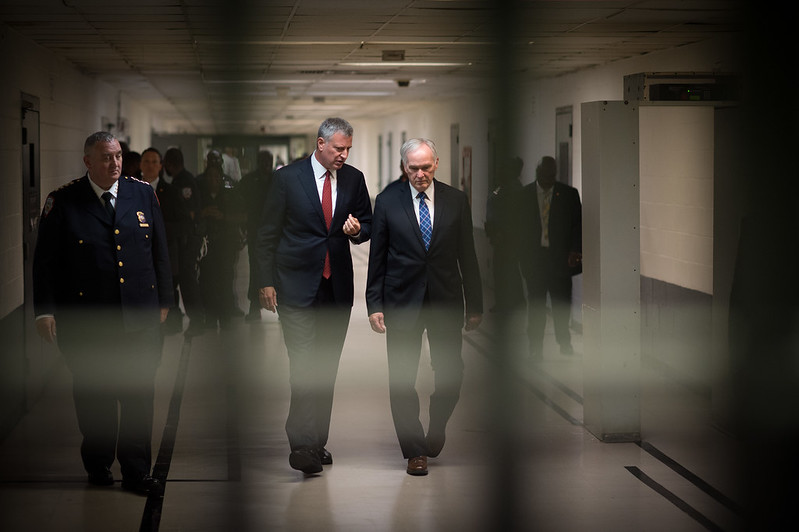 In his second term in office, Mayor Bill de Blasio has worked with the New York City Council to usher through a plan that will close the scandal-ridden Rikers Island jail complex and replace it with four borough-based facilities by 2026. He has repeatedly decried the crumbling infrastructure and the well-documented incidents of violence, by detainees and guards, among the many issues of the sprawling Island facilities. But the mayor has not visited Rikers Island in three years, and not at all since he was reelected nor since the deadly coronavirus pandemic took hold in the city.

The mayor’s last visit to Rikers was in June 2017, a few months before he won his second and final term. Three months prior to that visit, he had announced his support for the plan to close Rikers that had been proposed by the Independent Commission on New York City Criminal Justice and Incarceration Reform, convened by former City Council Speaker Melissa Mark-Viverito and chaired by former New York Chief Judge Jonathan Lippmann.

The mayor hasn’t always taken a keen interest in the issues that plague Rikers. His first visit to the island was in December 2014, nearly a year into his first term, in the aftermath of federal and state investigations into the conditions of the jails. De Blasio said then and has said repeatedly since that the conditions in Rikers jails were something he did not have a firm grasp of before becoming mayor.

He also initially hesitated to back calls from various advocates and elected officials, including Comptroller Scott Stringer and Mark-Viverito, then the Lippman Commission’s plan, before adopting the essence of that plan and seeing its initial phases through.

The focus on Rikers has only intensified in his second term, however, as the borough-based jails plan sped through the city’s land use review process, finalized by the City Council. The city combined all four jail facilities, located in each borough save Staten Island, into one land use application, shortening the window for its approval. The overall plan faced criticism from some criminal justice reformers, while each individual facility proposal was the target of community opposition. Concessions were made to local Council members, with the sizes of the new facilities reduced, and the plan was approved.

The coronavirus pandemic has also renewed attention on Rikers, as city jails have seen clusters of infections, and the deaths of three detainees and ten corrections employees. When the city was beginning to shut down in March, the mayor suspended in-person visits to all jails to limit the spread of the virus. He’s also ordered the release of hundreds of detainees who were being held on nonviolent offenses or were vulnerable during the outbreak because of their age or health.

Several news reports have emerged since then of the apparent mismanagement of the crisis by the Department of Correction. The New York Times, in a Wednesday report, quoted several unnamed Rikers corrections officers who complained that they felt at risk because of the failure to respond adequately to the outbreak. But none of it has prompted the mayor to head to the Island to see the issues for himself. In contrast, de Blasio has been visiting food distribution centers, traditional and pop-up hospital facilities, supply warehouses, and other sites.

The mayor’s press secretary did not provide comment when asked about de Blasio’s last trip to Rikers and whether he felt it may be necessary to see the conditions there in person during the pandemic.

Other elected officials have similarly not been to Rikers in recent months, citing the concern for the safety of detainees and DOC employees. Notably, elected officials haven’t shown the same reluctance to visit hospitals where tens of thousands of New Yorkers infected with the virus have been admitted.

In early October, just prior to the Council’s vote to approve the borough-based jails plan, City Council Speaker Corey Johnson and several of his colleagues paid their most recent visit to the Island.

Johnson said in a statement that the Council is continuing its oversight of the situation on Rikers. “From the outset of the COVID-19 pandemic, I urged for the release of as many incarcerated New Yorkers as possible to tackle the spread of this virus in our jail system,” he said, adding in particular that individuals should not be jailed for technical parole violations.

“We had a more than seven-hour long hearing on Tuesday to assess how DOC is handling the crisis. As we mourn the death of DOC staffers and incarcerated individuals, we are in constant communication with the Department, the Board of Correction, and advocates to ensure robust oversight as this situation develops,” he said.

A spokesperson told Gotham Gazette that Johnson does not have plans to visit the island any time soon, and that only essential workers should be travelling to and fro.

Council Member Keith Powers, who chairs the Criminal Justice Committee which has Rikers under its purview, said he has thought about visiting Rikers but has balanced that with the need to ensure that there is no further spread of the virus. “I thought about going in at some point to see conditions for myself, but I did think it was right to withhold doing that for the time being based on what's going on in the world,” he said.

Powers was among the members who went to Rikers in October. He said he has been in constant contact with the Board of Corrections and DOC to conduct ongoing monitoring from afar. He said he is concerned about reports he has received from the Board of Corrections that some social distancing protocols are not being followed, and the concerns being raised by advocates that the conditions at Rikers are ripe to make the crisis worse. “My philosophy here is we can always be doing more and doing better to help people out as they are in our city jails,” he said.

He also emphasized that he wouldn’t want to make a symbolic trip to Rikers. “I would do it for substantive reasons to make sure that there is an appropriate response to the Covid crisis within our city jails and to oversee how the operations are running during the public health crisis,” he said.