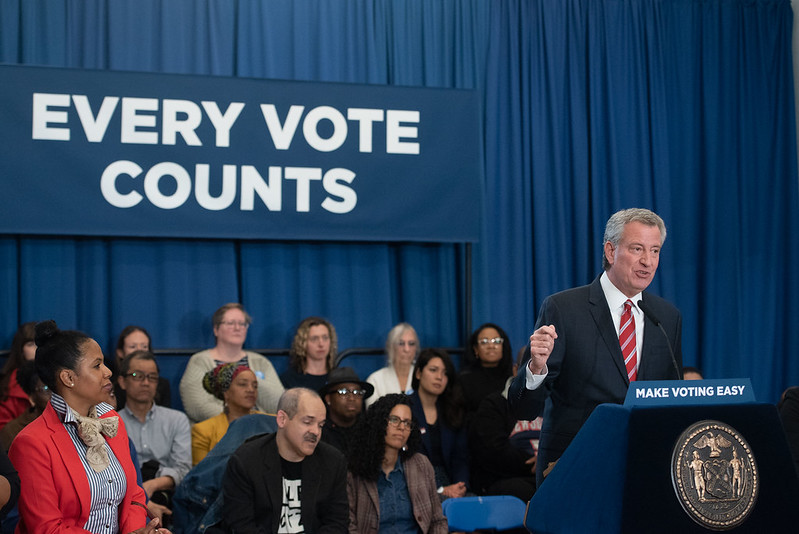 Register to vote by Friday May 29 (photo: Michael Appleton/Mayor's Office)

New York’s primary election is less than a month away on, June 23, preceded by early voting June 13-21, and with all eligible voters allowed to vote absentee due to the coronavirus pandemic. The deadline for new voters to register is this Friday, May 29 [Find more info here].

There are state legislative, congressional, and presidential contests on the ballot along with a few local seats like Queens Borough President and a Brooklyn City Council race. Only party-affiliated voters can vote in the primaries, and almost all of the races in New York City are Democratic primaries. All Democrats across the state can vote in the party’s presidential primary, and there are many primaries for seats in the U.S. House of Representatives, State Senate, and State Assembly. All Queens Democrats can vote in the borough president primary.

Check your voter registration online here. Enter your address and party affiliation here to see your sample ballot. You can read the full list of all primaries on the June ballot in New York City here.

The coronavirus pandemic caused significant upheaval for the state’s political calendar this year and several elections that were meant to take place in the preceding months have been delayed till the June party primary. (Some special elections – for state Assembly, Senate and Queens Borough President – were even cancelled through executive order by Governor Andrew Cuomo, and primaries are being held to fill those seats, to be followed by the fall general election, in more typical fashion.)

As many Democratic presidential candidates were dropping from the race and the coronavirus outbreak was taking hold of New York, state leaders inserted language in the April budget to allow the state Board of Elections to cancel the presidential primary if all candidates other than one had conceded. When that happened and Joe Biden became the presumptive Democratic nominee, the BOE voted to cancel the primary, but the decision was overturned by a federal judge after a suit by former candidate Andrew Yang, among others, and much protest from former candidate Bernie Sanders and his supporters. The Republican presidential primary was cancelled months ago since President Donald Trump is the party’s only candidate.

Though in-person voting will still take place, with strict social distancing guidelines for polling sites, voters are being urged to instead vote through absentee ballots. (Short of that, taking advantage of early voting hours is encouraged. Find the list of New York City’s early voting sites here.)

In April, the governor allowed all voters to apply for an absentee ballot, using the pandemic as a valid excuse for one; he later mandated that the Board of Elections send all eligible voters an absentee ballot application with paid postage. Votes must then request the ballot, receive that in the mail, fill it out, and send it back.

The State BOE has applications available in English and Spanish. The New York City Board of Elections provides forms in Chinese, Korean, and Bengali as well.

The New York City BOE, along with a few other counties, has an online portal where voters can apply for an absentee ballot (this may be advisable for anyone concerned the BOE may not mail them the application as mandated by the governor). Applications are also being accepted by email, fax and by phone by calling 1-866-VOTE-NYC (1-866-868-3692).

Boards of Elections began accepting requests for absentee ballots on May 24. A request for an absentee ballot must be postmarked by June 16. Though, again, Boards are supposed to be mailing every eligible voter an application without them having to request one.

Friday, May 29 is the deadline for anyone not already registered to vote who wishes to participate in the June primaries to register, either in person or via mailed form, with postmark no later than that day and received by the BOE by June 3. The BOE will also process changes of address if they are received by June 3.

The deadline for changing party affiliation, however, passed February 14.

The fall elections, including the general election for president, are set for November 3, with an early voting period beginning toward the end of October.