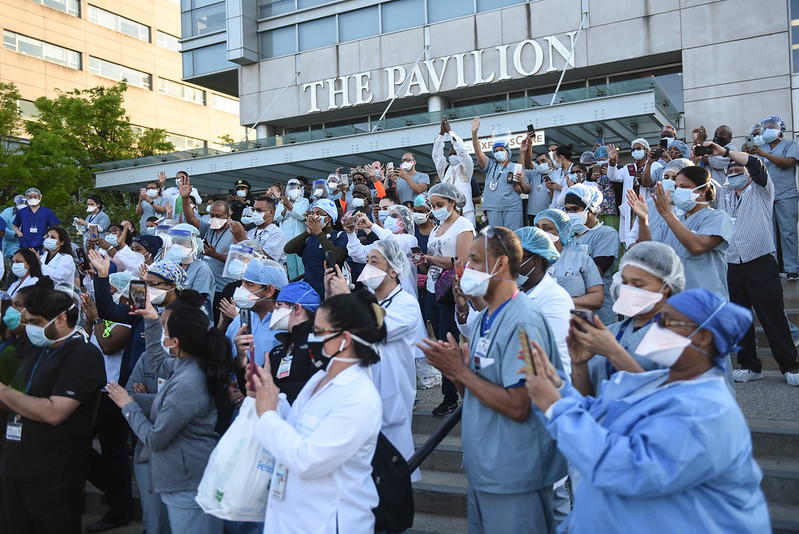 During the COVID-19 pandemic, New Yorkers can be split between the people who have been patients in or staffed hospitals, where wards were likened to war zones, and those living and working everywhere else.

In the first weeks of the crisis, as the city braced for the "apex" in the number of coronavirus hospitalizations, nurses perhaps more than anyone else became the de facto front lines of the pandemic and a symbol of the immense societal effort to overcome a crushing threat. As the crisis began to build, they saw their floors inundated with people dying or clinging to life with the worst always believed to be yet to come.

The apex came in early April and has since ceded to a slowly diminishing onslaught, where infections, hospitalizations, and deaths continue even as the sound of ubiquitous ambulance sirens fades. For nurses, doctors, and other medical professionals, the daily trauma of witnessing the human costs of the virus remains. Now, as the city moves toward reopening the economy and New Yorkers gather in protest of police violence against black people, nurses are looking ahead to an uncertain future. With many still processing what they have been through, the fear of a resurgence is almost too much to bear.

"There's like this feeling of dread," one intensive care nurse said by text message in the dark hours of a recent morning during a break in her shift. She has been working 12-hour nights, from 8 p.m. to 8 a.m., three to four shifts per week, since her floor was converted into a coronavirus unit in March.

"All these pictures of a million people out at the park is making us feel bad and scared," she wrote, "Bc we all feel like we can't handle doing this that much longer." She spoke under the condition of anonymity out of fear of reprisal from her employer. There is common anxiety among the nurses Gotham Gazette spoke with that more lax behavior in public will lead directly to more infections and more hospitalizations.

In ten weeks of crisis, New York City hospitals have seen more than 50,000 COVID-19 patients and 16,500 deaths, three-quarters of the health department's official city count of coronavirus fatalities. At its height in the first week of April, over 1,500 people were being hospitalized each day. Over the course of 12 days, more than 5,000 people died from the virus. Auditoriums became makeshift intensive care units. Hospitals, facing severe staffing shortages, often assigned nurses to positions for which they were undertrained. Protective equipment was scarce, its applicable uses stretched, and guidance from the Centers for Disease Control and Prevention and from the New York City and State health departments changed regularly.

"Nobody ever wants to be there again. That was horrible," said Judy Sheridan-Gonzalez, an emergency room nurse at Montefiore Hospital in the Bronx and the president of the New York State Nurses Association. "We lost faith in our government, our hospitals, our scientific agencies, and we had to all sort of do our own research and it was madness. Nothing was OK."

"Having people die in such huge numbers, or to be so sick and not have family around, and not being able to touch them precisely because you didn't have the right PPE, you couldn't even spend time. It was just anathema to what a nurse is supposed to do," Sheridan-Gonzalez said. She said there will be a large need for mental health services for nurses in the coming months, and attrition may be high if nurses aren't better supported in the event of a resurgence.

At least 30 NYSNA nurses have died from the virus. The actual death toll is likely much higher, Sheridan-Gonzalez said, as hospitals and institutions have generally not been forthcoming with information, even when pressed by union leaders. Nurses and other front line workers have also been asked by their employer or insurance carrier to prove they contracted COVID-19 on the job in order to get workers' compensation and death benefits, an absurd proposition to the workers themselves.

The trajectory of the number of cases, hospitalizations, and deaths was brought down through the massive social distancing effort that included an unprecedented shuttering of social and economic activity. Over the last week, daily hospital admissions for COVID-19 in the city have hovered around 60, and the death toll has dropped below 50 per day for over a week.

The crisis has put a unique level of stress on nurses because, unlike most other disasters that have a discernible beginning and end, the coronavirus pandemic is indefinite, Sheridan-Gonzalez said. Nurses across the board are coming to terms with the possibility that the crisis will never really end.

"This is what work now is,” said a nurse working in a psychiatric ward at a Manhattan hospital during a recent phone interview. “This is what we need to learn to get used to,” she added, of the threat of the virus.

The city has met nearly all of the state benchmarks required to begin reopening non-essential businesses, most of which have to do with hospital capacity and admissions rates. With 32 percent of ICU beds available and nearly the required 30 percent of total hospital beds, Governor Andrew Cuomo announced the city would begin to ease restrictions on certain public activity on June 8.

"Everyone's like enjoy it while it lasts bc it's gonna get bad again," the ICU nurse wrote, shortly before the phase one reopening date was announced. "We don't want to get too optimistic about the situation bc it's very unpredictable and out of our control. And it's better to just prepare for the worst mentally."

At least 3,780 NYSNA members have been exposed to the coronavirus, of which 58 percent showed symptoms, according to the union, which represents 42,000 nurses statewide. The physical toll has come with a psychological one.

"Anyone who worked during this period of time...has been deeply traumatized, particularly people who are taking care of patients who had this illness," Sheridan-Gonzalez said. "And our hospitals were not prepared -- our country was not prepared -- for this huge influx of very sick people for which we had no cure."

"We're just starting to process the trauma that we went through. I think we are going to see a lot of mental anguish and PTSD," she said.

The ICU nurse said she believes she has post-traumatic stress disorder, or PTSD, which occurs in people who have experienced trauma, like abuse or war. "It just feels like it's never gonna be over," she texted.

"It feels like the whole thing is totally futile," she added, commenting on efforts to reopen safely and knowing the high mortality rate on her unit over the last few months. She is also concerned about the long-term care of patients who suffered strokes related to Covid, which she believes comprises many of the survivors.

The nurses union is eying the response of the city and state governments, and private hospitals, to the next chapter of the pandemic in New York and the potential of a second wave of infections.

The national unrest that has emerged in the last week over the killing of George Floyd, a black man, by Minneapolis police officers, has added a complicated dimension to the next phases of the coronavirus crisis. Since Thursday, nightly protests in New York have become some of the first mass public gatherings since the city entered a state of emergency in mid-March.

In a statement Monday, Sheridan-Gonzalez wrote: "Unfortunately, President Trump’s calls to 'Liberate Michigan!,' notably appearing without a mask, rallied his supporters to assemble in huge numbers—the vast majority without masks—to rush reopening cities across the country for many weeks. We're relieved that most people protesting George Floyd’s murder are wearing masks, but we're concerned about those who don’t and the lack of social distancing. The tension between safety and the right to protest is challenging, something we're examining.

Asked what she thought of people gathering to protest Floyd's killing and other acts of racialized police violence, the ICU nurse texted: "I hope that people who are most at risk of getting very sick from COVID (people with preexisting medical conditions) will stay home and try and support the movement in other ways."

"It would be incredibly tragic if this led to many more COVID-related deaths, especially because the disease has already had a disproportionately negative effect on the black community," the nurse, who is white, said.

She added: "I also think it’s important that if these protests do result in more cases of coronavirus, people recognize that it’s a result of the police brutality and do not place the blame on the protesters. It’s important that the medical community comes together and supports the movement, regardless of how people choose to protest, especially because there is so much racial injustice in medicine."