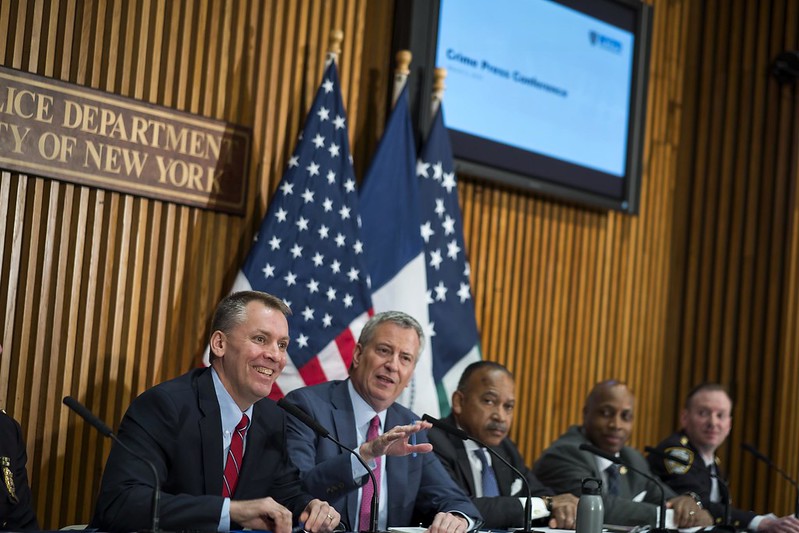 As Mayor Bill de Blasio struggles with the protests against police brutality and racism that have gripped New York City over the past few days, he has promised that NYPD officers will be swiftly disciplined for any misconduct in their response to protesters and that larger structural changes to police accountability are on the way. But the NYPD has been slow to reform its opaque internal disciplinary processes over the years, and has even missed self-imposed deadlines to implement the recommendations issued well more than a year ago by an independent review panel.

“I've had this conversation with the Commissioner. If an officer is under investigation, those investigations from now on are going to go faster. We're going to have faster results,” de Blasio said at his daily press briefing on Wednesday, when he was asked about several incidents of apparent police misconduct and excessive force during protests over the last few days, several of which were caught on video. As of Sunday, according to NYPD Commissioner Dermot Shea, the department was investigating at least six such incidents. Since then, there have been additional incidents, including some where officers harassed reporters and essential workers to enforce a citywide curfew that first went into effect on Monday night.

De Blasio, after initially defending the department, has been walking the thin line between critiquing and commending the police. He has also repeatedly cited improvements in the department’s disciplinary practices and the reforms his administration has carried out. “So that work has gone on for six-and-a-half years. It's going to go a lot further in the next year-and-a-half,” he said Wednesday. De Blasio said he wanted to “immediately” see the repeal of Section 50-a of the state civil rights law, which shields police disciplinary records from public disclosure. “I want to see a faster disciplinary process at the NYPD, I believe we can achieve that and I'll provide whatever resources are needed for that,” he added.

The NYPD, meanwhile, has dragged its feet implementing reforms that were recommended last year by an independent blue ribbon commission convened by then-Commissioner James O’Neill. The commission made 13 recommendations, which were accepted by O’Neill in February 2019. Five of the recommendations were implemented within 60 days, but others have stalled, and Commissioner Shea struggled to discuss the specifics when asked about them by a reporter at the mayor’s Wednesday briefing.

“The independent panel found an effective and fair system and by adopting all of its recommendations, we are improving it every day in every way,” said NYPD Assistant Chief Matthew Pontillo, in a statement. “The recommendations the NYPD has adopted will make the system the strongest and most transparent it can be, within the bounds of state law. It will also build upon a cadre of recent reforms, including the deployment of body-worn cameras, the dissemination of videos from those cameras and the annual publication of data on discipline, among other things.”

Among the changes implemented within 60 days were the department’s support for amending, not repealing, 50-a; preventing an expansion in the scope of 50-a; enhanced public reporting on the discipline system; publishing trial room calendars for disciplinary proceedings; and greater reporting of when a disciplinary action is different from what is recommended by an oversight body.

Some reforms have since been implemented. The department has been producing memos since the Spring of last year documenting when a disciplinary action varied from a recommendation, but those memos cannot be publicly released because of 50-a. A new policy of enforcement against officers who make false statements became effective on April 1 this year, though it was meant to be in place by the summer of 2019.

Other key recommendations have yet to be put into effect, though NYPD officials have said they will be implemented soon. For instance, the NYPD had said a new executive-level civilian liaison would be appointed by the Fall of 2019, but has not yet been chosen. According to an NYPD spokesperson, 34 people applied for the position and the appointment is imminent.

The department is also developing a new “disciplinary matrix” that would standardize disciplinary action for cases of misconduct by officers. The NYPD chose to create the matrix on its own instead of having to do so under legislation that had been proposed in the City Council. The disciplinary matrix, the NYPD spokesperson noted, “is expected to be a living document, subject to ongoing evolution and improvement.”

The department also promised to speed up lower level disciplinary proceedings by hiring more attorneys, but that has not happened yet because the city budget remains undecided.

Finally, the independent panel recommended that the NYPD allow an outside body to audit its new disciplinary system. The department is working with the Commission to Combat Police Corruption on that audit, the first of which will happen by the end of the year, the spokesperson said.

“I think our biggest obstacle here is transparency and making sure that we communicate to the public what is going on, what is going on with investigations,” Shea said on Wednesday. “We might not always see exactly eye to eye, but I think that most of the difficulties that we engage in can be cleared up with clear communication and explaining the why.”

He said the blue ribbon panel’s recommendations were “overwhelmingly, positively received,” and many put into effect. “Things such as transparency, things such as a uniform discipline system to make sure that there's no inequities, and I believe we've posted some of that. So, we're moving towards it.”