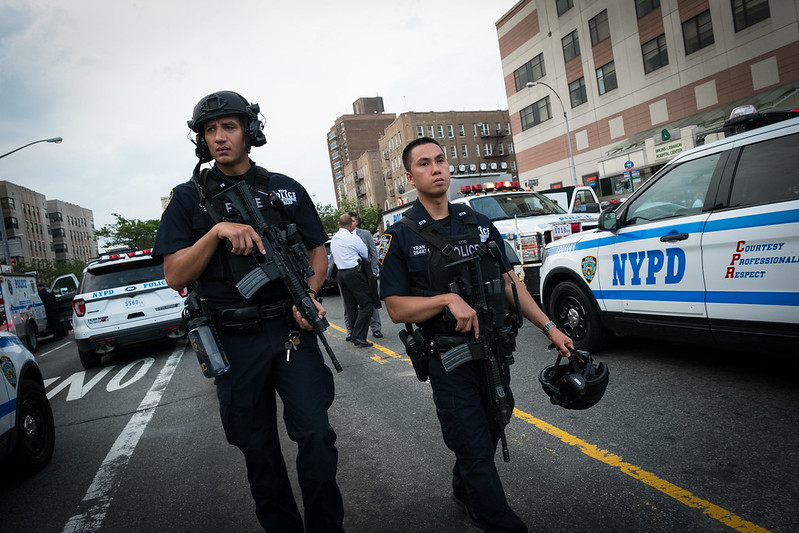 The NYPD budget is in the spotlight, but what's in it (photo: Edwin J. Torres/Mayor's Office)

The daily protests in New York City over police brutality and racism bore fruit this weekend as Mayor Bill de Blasio reversed course, announcing that he would cut police department funding and institute other reforms at the NYPD. The State Legislature also took notice and expedited a long list of police accountability and transparency measures that had languished for years.

Over the last ten days, as the protests swelled across the city and the NYPD responded with force, calls to “Defund the NYPD” reached a crescendo. Also against the backdrop of a severe city fiscal crisis brought about by the coronavirus shutdown, several City Council members vowed to vote against a budget that does not include major cuts to the police department, many of them insisting on at least a $1 billion reduction as the Council and mayor must deliver a spending plan by the July 1 start of the new fiscal year.

The $5.9 billion in direct operating funding for the department doesn’t nearly cover what the police cost in New York City. Pension contributions and fringe benefits cost about another $5 billion in the 2020 fiscal year. There are capital funds allocated to policing infrastructure, including roughly $411 million in city funds in the 2021 fiscal year for cars and precincts, and another $211 million in expense funding spent on debt service for police-related capital costs that is not factored into the NYPD’s budget.

Added to that are the costs to the city from settlements of claims against the NYPD. The latest annual report from Comptroller Scott Stringer’s office, from April 2019, showed that the city paid $230 million in the 2018 fiscal year for settlements and judgements stemming from 6,472 lawsuits.

The mayor’s executive budget proposal for the 2021 fiscal year, released in April, estimated that the NYPD will spend $5.92 billion by the end of the 2020 fiscal year and allocated $5.64 billion to the department (without state and federal funds) for the next fiscal year. Though the mayor’s budget included significant planned cuts at many city agencies, the NYPD emerged relatively unscathed, with only $23.8 million in planned reductions. And unlike other agencies that had to find large savings under the mayor’s $2.1 billion Program to Eliminate the Gap, the NYPD only found about $25 million in FY2020 and $16 million in FY2021.

At the same time, the mayor slashed planned funding for education, youth employment, and after school programs. The Department of Youth and Community Development (DYCD) saw a 32% cut in its proposed budget, entirely eliminating the Summer Youth Employment Program that provided summer jobs to 70,000 young people, many from low-income communities of color, last year. After immense outcry, de Blaso has since indicated he is working with the Council and employers to create a version of the program, but has not announced details as June moves along.

The mayor promised on Sunday that he would shift funding from the NYPD towards “youth initiatives and social services,” though he did not provide specific numbers. “The details will be worked out in the budget process in the weeks ahead, but I want people to understand that we are committed to shifting resources to ensure that the focus is on our young people,” he said at a press briefing. “And I also will affirm while doing that, we will only do it in a way that we are certain continues to ensure that this city will be safe.”

The mayor’s announcement was welcomed by many of his fellow Democrats and by activists, though they noted it remains to be seen how far those cuts will go. Even NYPD Commissioner Dermot Shea expressed public support, tweeting, "To help the kids of our city, I’m 1,000% behind shifting some funding from the police to youth programs. It’s incumbent upon all of us to dig down and do what’s needed." He too said in interviews that he still wants to see exactly what the mayor and City Council have in mind, though.

“I am happy that the Mayor had been listening to the Council’s calls to make substantial cuts to the NYPD and reinvest that money in communities of color and our young New Yorkers,” said City Council Speaker Corey Johnson, in a statement to Gotham Gazette. “I commend the Council’s Black, Latino and Asian Caucus for its strong leadership in this discussion. The devil is in the details, but we are fighting hard for a budget that reflects our values and our priorities. As we have said, a less than one percent cut to the NYPD and a 32% cut to DYCD is not representative of our values.”

It would be hard to significantly cut the NYPD’s budget without severely reducing its headcount. The city in 2015 added nearly 1,800 employees to the NYPD, including 1,300 new officers at the behest of the City Council.

According to an analysis by the Independent Budget Office, about 88.8% of the department’s adopted budget in Fiscal Year 2019 covered personnel services (salaries, wages and overtime) while 11.2% went to “Other than Personal Services” (OTPS) to fund purchase of supplies and equipment. Salaries and overtime for full-time employees – more than 36,000 uniformed personnel and about 15,500 civilian employees – covered nearly 75% of the budget. Planned overtime alone accounted for about 10% (or nearly $600 million) of spending that year while actual overtime spending was $730 million by the end of the fiscal year.

City Comptroller Scott Stringer has recommended that the NYPD cut $1.1 billion in spending over four years -- roughly $265 million per year -- by reducing the number of uniformed officers through attrition, cutting down overtime, and lowering OTPS costs.

Stringer, who like Johnson is a Democrat running for mayor in next year’s election, called for those savings to be reinvested in communities that have been particularly hurt by structural racism and police violence. “Breaking down structural racism in New York City will require long-term, lasting change — and that must include reducing the NYPD’s budget,” Stringer said, in part, in a statement.

Stringer’s office says the comptroller is calling for a 5% cut in the NYPD’s planned fiscal year 2021 operating budget, while “the mayor is proposing a mere 0.31 percent cut” from the $5.9 billion sum.

Queens City Council Member Donovan Richards, who chairs the public safety committee that has oversight of the NYPD, said the Council is “finally gaining a lot of momentum” to make cuts in areas that they have looked at for years. He particularly noted that police overtime costs – which were as high as the $730 million – should be cut since crime is at or near historic lows and the city is mostly shut down because of the pandemic, and major public events, parades, and sports games have all been cancelled. Overtime use and abuse has long been a focus of the Council and fiscal watchdogs, particularly because the department does not report on overtime spending in a transparent manner.

Even before the protests of this last week, the Council had been pushing for reallocating funds from the NYPD to youth programs as part of its vision for how to respond to the massive drop in tax revenue brought on by the coronavirus crisis. At a budget hearing, Richards said the city should cancel an incoming NYPD class, which he estimated could save $25 million. The city had delayed the class to July, saving about $6 million.

“What is the city’s priority? To lock people up or find young people a job in the summer so they can in a lot of cases help their parents pay the bills and also be self-sufficient?,” he wondered. “Idle time is the devil’s playground. We don’t want our young people ending up in the justice system, especially in the hardest hit communities…during this pandemic.”

Richards also raised a concern that the mayor himself acknowledged on Sunday. There are functions that the NYPD shouldn’t necessarily play, Richards noted, such as community development and school safety. “Is this the message that we want to send to our children? That when they go to get their education, that they should be policed?” he said.

In his announcement on Sunday, de Blasio said his recently created Task Force on Racial Inclusion and Equity would examine roles in city governance where the NYPD can be removed. He also said the police would no longer conduct enforcement over street vendors and instead that function would be given to a civilian agency.

The “NYC Budget Justice Campaign,” which is led by police reform groups and has been organizing around defunding the NYPD, writes that “While a cut of over $1 billion may sound dramatic, it would simply return the NYPD’s budget to roughly 2014 levels — a moment when crime rates had already plummeted in New York City.” The police department’s current roughly $6 billion budget, the campaign notes, “is larger than what we spend on health, homeless services, youth development, and workforce development combined.”

Money earmarked for the police should be shifted to summer youth employment, “education, homeless services, mental health services, programs for the aging, community-based organizations, and provide direct support to frontline and essential workers, and undocumented New Yorkers,” the campaign says. The funding to be shifted can be found through an NYPD hiring freeze; cancelling new cadet classes; shifting social service work from the police department to more appropriate agencies; firing “many” of the “220 NYPD officers currently on modified duty,” and more.

Richards also predicted that once state Civil Rights Law section 50-a is repealed or reformed and disciplinary records of police officers are made public, the department will be quicker to dismiss officers with records of misconduct and, therefore, will automatically reduce the amount of money that goes to settling lawsuits. In response to the recent protests, de Blasio has pledged to speed up the NYPD’s notoriously slow and secretive disciplinary process.

Ana Champeny, director of city studies at Citizens Budget Commission, a fiscal watchdog, said it’s hard to figure out how the NYPD spends its funds because its budget is opaque to the public.

“Looking at the budget doesn’t actually tell you why overtime is going up or what it’s even being spent on,” she said. The Mayor’s Office of Management and Budget does publish a “budget function analysis” that outlines different functions of NYPD spending but they are broad lumped categories with brief descriptions that cover hundreds of millions in allocations.

“Whenever we’re asked, what’s driving the growth, it’s really hard to say because we don’t have the disaggregated spending data being published,” she added, “and that should be publicly available in a machine-readable format so that people can really see what was it that you thought you were going to spend on each of these areas at the beginning in your budget and what did you actually spend.”

Champeny echoed Richards’ and Stringer’s prescriptions on cutting overtime and reducing the NYPD’s headcount. CBC released a report in 2017 that noted that uniformed agencies’ overtime costs over the previous nine years exceeded projections in the adopted budget by an average of 42%. Uniformed NYPD officers earned an average of 19% in overtime pay each year, CBC estimated at the time. The nonprofit recommended several measures to cut down on overtime, though some would require bargaining with police unions to change work rules.

“We’re in the middle of what we think is going to be the biggest fiscal and economic crisis of our generation so the city really needs to be taking a close look at everything,” Champeny said. “Everyone really should be trying to see where they can tighten their belt especially given that we don’t know how this recovery will play out and whether the projections that we have right now will end up being accurate.”