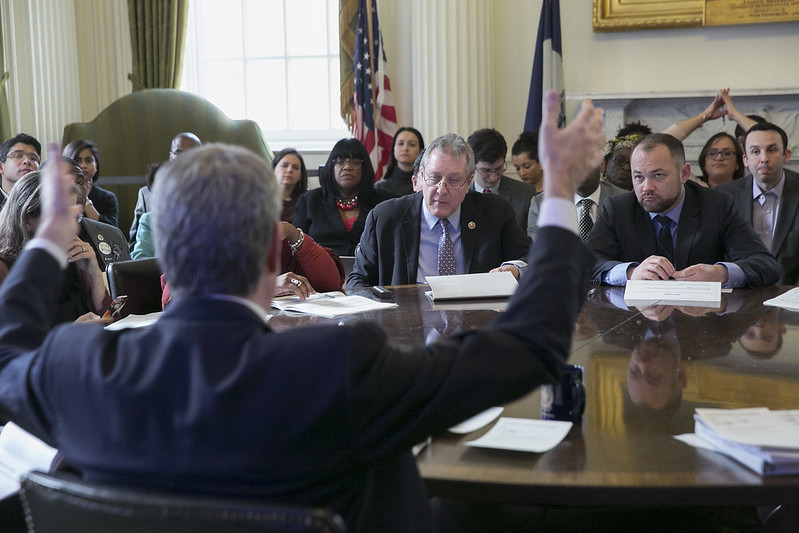 With three weeks to go before the budget for the next fiscal year is due, the City Council is putting pressure on Mayor Bill de Blasio to spell out planned cuts to city agencies to fill a $9 billion projected budget gap. But the administration missed a Monday deadline set by the Council to propose new cuts, balancing the budget in a way that reprioritizes social services and investment in youth and education.

The COVID-19 pandemic is taking a massive financial toll on the city, forcing the mayor toward drastic action. In his latest budget plan released in April, de Blasio cut his prior budget draft by $6 billion and outlined plans to draw $4 billion from the city’s reserves. When the mayor released that $89.3 billion executive budget proposal, the city expected to lose $7.4 billion in tax revenue by the end of the upcoming 2021 fiscal year, which begins July 1 of this year. The projected gap has since grown to $9 billion.

Though the mayor did institute a Program to Eliminate the Gap to mandate cuts at city agencies and the administration identified additional savings, together those only covered a $2.7 billion gap. The Council expressed broad discontent with the administration’s effort as insufficient and priorities as misguided, noting in particular that the NYPD would see a less than 1% budget cut while the Department of Youth and Community Development would have its already much smaller budget slashed by 32%. While crime is at historic lows, the city would continue to graduate more officers through the police academy while eliminating the Summer Youth Employment Program for 70,000 young New Yorkers as well as after school programs.

In a May 30 letter, City Council Speaker Corey Johnson and Council Members Daniel Dromm and Vanessa Gibson, who chair the Committee on Finance and Subcommittee on Capital Budget respectively, called on the mayor to craft cuts between 5-7% of each agency budget. They noted that federal aid may not arrive before the budget deadline and that further state budget cuts, which Governor Andrew Cuomo has telegraphed, will worsen the city’s finances.

“Therefore, we must search agency budgets for more savings to ensure that we have done everything we can to balance the budget without resorting to borrowing that will have significant long-term implications for New York City’s future,” they wrote.

The letter requested the administration to provide a list of proposed cuts by Monday, June 8, while insisting that “no proposed cut should be one that would weaken the social safety net or hurt vulnerable New Yorkers.” The administration, however, missed that deadline to respond.

“The council will keep pushing the administration to do the hard work of identifying budget cuts,” a Council spokesperson said in an email. The mayor’s office did not provide comment on the Council’s demand or status of de Blasio’s budget reevaluations.

The Council’s deadline was not the only one the de Blasio administration missed this week.

On May 12, Comptroller Scott Stringer launched an investigation into the city’s preparedness and response to the COVID-19 pandemic, giving the mayor’s office an initial deadline of Tuesday, June 9, to begin producing relevant documents about agency decision-making, communication procedures, and more. After the administration failed to meet that deadline, Stringer issued a subpoena for those documents on Thursday.

“The Administration owes New Yorkers an explanation of what they knew about this deadly virus, when they knew it, and what they did about it,” Stringer said in a statement, pointing out that the administration has not even suggested a timeline for when it will begin to hand over the files.

“The Administration’s refusal to comply with our investigation is unacceptable. I am therefore issuing a subpoena for these documents, which should be turned over to our investigators expeditiously. Open and honest government is what New Yorkers deserve, and my office demands nothing less,” he said.

The mayor’s office did not take kindly to the comptroller’s move. “We’re in the midst of reopening our city while preventing a second wave of the pandemic. The issuance of a subpoena, when we are willing to work with the Comptroller, is nothing more than a political stunt,” said Avery Cohen, a mayoral spokesperson, in an email. “In the spirit of transparency, the Administration has taken all the necessary measures to preserve all documents responsive to the Comptroller’s extremely broad request without sacrificing the critical resources, personnel, and time that are necessary to preserve the health of New Yorkers and save lives.”

A spokesperson for Stringer, Hazel Crampton-Hays, responded on Twitter, saying that the comptroller’s office had thus far received “zero documents or even a schedule of when we can expect them.”

Alluding to Stringer’s 2021 mayoral campaign, Cohen shot back that “The Comptroller’s political ambitions don’t trump the safety and well-being of 8.6 [million New Yorkers]. We’re in a crisis and using every last resource to reopen the city safely— all while preserving the documents to ensure we’re able to comprehensively respond to your fishing expedition.”

“This isn’t a game,” Crampton-Hays then responded. “More than 17,000 New Yorkers died. Their loved ones and neighbors deserve transparency and accountability.”