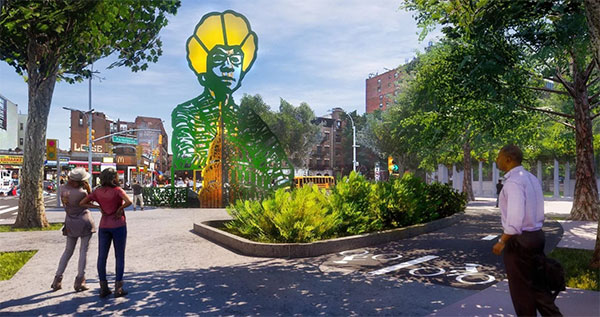 A rendering of the planned Shirley Chisholm monument (photo: women.nyc)

The building of the first monument in a city initiative to honor famous women from New York City’s history and correct a long-standing gender imbalance in monuments across the city has been delayed, Gotham Gazette has learned. City officials are pointing to the shutdown stemming from the COVID-19 pandemic as the reason that the monument of Brooklyn's Shirley Chisholm, who became the first black woman elected to the House of Representatives in 1968, will not be completed by the end of this year as originally planned.

In 2018, New York City First Lady Chirlane McCray and then-Deputy Mayor Alicia Glen announced She Built NYC, a program aimed at addressing the fact that only five out of 150 statues of historical figures in the city are of women. In November that year, the administration revealed that Chisholm was the first woman to be honored under the initiative.

“Congresswoman Shirley Chisholm’s legacy of leadership and activism has paved the way for thousands of women to seek public office,” McCray said in the announcement, on the 94th anniversary of Chisholm’s birthday and the 50th anniversary of her election to Congress. “She is exactly the kind of New York woman whose contributions should be honored with representation in our public spaces, and that is now being realized with She Built NYC.”

Chisholm, a Democrat who represented New York’s 12th Congressional District, also ran for president in 1972, becoming the first woman to seek the presidential nomination of one of the major political parties. Last year, the State named a new 407-acre park in Brooklyn in her honor, under Governor Andrew Cuomo's Vital Brooklyn initiative.

The city's monument of Chisholm, designed by artists Amanda Williams and Olalekan Jeyifous, was meant to be installed at the Parkside entrance to Prospect Park by the end of 2020 but the project has been thrown off track.

“The Shirley Chisholm monument project has been delayed due to the state PAUSE order and concerns around social distancing. We remain committed to honoring Chisholm and it is anticipated that the monument will be installed next year,” said Ryan Max, a spokesperson for the City’s Department of Cultural Affairs.

She Built NYC is led by McCray’s Women.NYC initiative and the Department of Cultural Affairs and is funded at $10 million over four years. It was borne out of the city's response to a debate about the historical figures represented in statues around the city, focused on both the lack of women represented as well as the presence of controversial figures such as Christopher Columbus and Marion Sims. The delay in honoring an African-American icon comes amid reignited Black Lives Matter protests in New York City and across the country after the police killing of George Floyd in Minneapolis, which have also led to renewed demands to remove Columbus and other statues.

There have been broad calls from activists to remove statues and monuments of historical figures with well-documented records of racism and replace them with monuments to notable people of color. Some municipalities have begun to heed those calls – the cities of Camden, New Jersey and Wilmington, Delaware recently removed statues of Columbus – while in New York, both Mayor Bill de Blasio and Governor Cuomo have rejected those pleas.

Controversy around New York City’s Columbus statue arose in 2017 after the violent Neo-Nazi protests in Charlottesville over the proposed removal of a statue of Confederate General Robert E. Lee. In response, de Blasio announced a Mayoral Advisory Commission on City Art, Monuments, and Markers. The commission issued a report in January 2018 that stated, “Due to the various time periods and methods of its assembly, New York City’s current collection of monuments and markers celebrates some histories and erases others.”

A majority of the commission members concluded that the statue of Columbus should remain in place but agreed that the city should commission works to recognize indigenous people and to more broadly inform the public about Columbus’ history. The commission also led to She Built NYC, which has solicited and received more than 2,000 nominations so far from the public for women that the city should honor. After first announcing the monument of Chisholm, the city additionally selected Billie Holiday, Elizabeth Jennings Graham, Dr. Helen Rodriguez Trías, Katherine Walker, Marsha P. Johnson, and Sylvia Rivera.

That list also spurred controversy because it did not include Mother Frances Cabrini, the patron saint of immigrants, though she had received the most number of nominations. De Blasio and others have indicated she will be a strong contender for future rounds, while Cuomo seized on the criticism of de Blasio and McCray to announce state plans for a Mother Cabrini statue.

In light of the current debate, de Blasio declined to revisit a proposal to take down the Columbus statue. Asked by a reporter on Friday, the mayor deferred to the advisory commission’s work. “[T]he commission did really careful, extensive work, really good, devoted people who care about understanding all of history and they care about social justice and they came up with a vision for how to address this. And, you know, we should, I think, just stick to what was achieved by that commission.”

Cuomo showed more wholehearted support. “I understand the feelings about Christopher Columbus and some of his acts, which nobody would support. But the statue has come to represent and signify appreciation for the Italian-American contribution to New York,” he said at a press briefing on Thursday.

Note - this article has been updated to mention the opening of the Shirley Chisholm State Park last year.