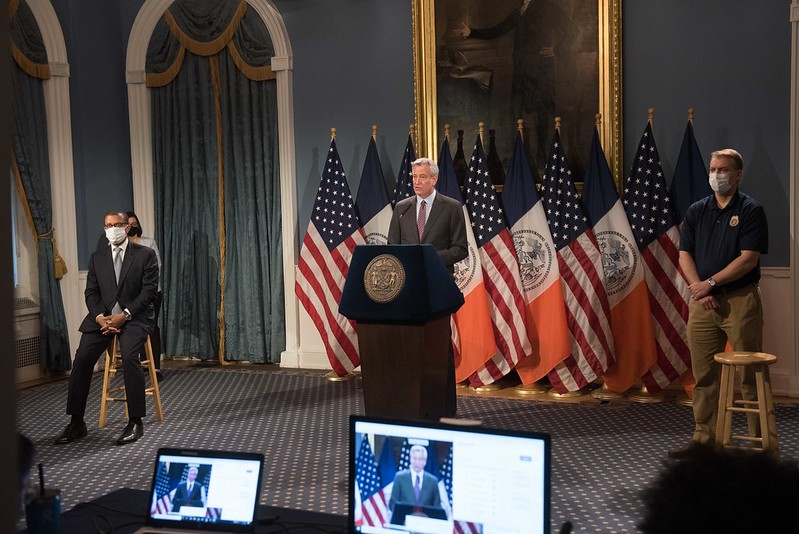 Brooklyn City Council Member Laurie Cumbo, a Democrat and the Council’s Majority Leader, wants to establish a new position in city government to oversee the reopening of city government after the coronavirus shutdown. Her bill (Intro. 1950) would create and require the position of “City Restart Officer” to coordinate safety measures taken by city agencies and require them to submit their policies and plans to the restart officer for review.

“Many New Yorkers are excited yet apprehensive about reopening and rightly so,” Cumbo said at a virtual hearing on the bill on Tuesday held by the Council Committee on Governmental Operations. “We want to make sure that we are putting forth the best practices to make sure that New York City opens safely.” Cumbo’s bill currently has 16 sponsors in the 51-seat City Council.

New York City is just over a week into phase 1 of its economic “reopening” that began when the COVID-19 public health crisis subsided to a significant degree, with the city hitting state-set metrics and some of Mayor Bill de Blasio’s own thresholds for allowing more travel and economic activity. The city could enter phase 2 of reopening on Monday, June 15, at the earliest, though de Blasio has said he believes it will be later than that.

The Tuesday hearing, led by Cuombo and Bronx Council Member Fernando Cabrera, who chairs the government operations committee, included an opportunity for the members to question de Blasio administration officials on the bill and the city’s reopening plans.

At the hearing, Lisette Camilo, the Commissioner of the Department of Citywide Administrative Services (DCAS), said that city government -- which employs hundreds of thousands of workers -- has taken the appropriate precautions to protect its workforce while maintaining necessary functions.

She estimated that two-thirds of the city’s workforce was able to transition to work from home, with only a fraction of those workers now returning to in-person work since phase 1 started. Most of the returning workers thus far have corresponded with industries that were allowed to restart in phase 1, such as Department of Buildings inspectors going to job sites again now that private construction is no longer largely halted.

Camilo also mentioned the “Core Four” precautions that all city workers should abide by, including staying home when sick, wearing face coverings, practicing good hygiene, and maintaining a social distance of six feet. She said the city is working towards making daily screenings available for workers.

At a Tuesday press conference, de Blasio said that the city now sponsors about 20,000 tests daily, with another 30,000 coming from other providers. The city’s tracing program is currently tracking 4,300 cases and the mayor said the program will have the capacity to trace 250,000 sometime this summer.

“That is the level we're going to reach, a quarter million people who will need help and support to help them through this disease, to keep all the rest of us safe as well,” de Blasio said.

Camilo says the city has divided its preparations for more workers returning to in-person work into four categories: preparing buildings, workspaces, workforce, and communication. The city is modifying its buildings and workspaces to allow workers to maintain social distance, training its workers to follow new protocols, and communicating these changes and resources to the public, according to Camilo.

Camilo and other agency leaders at the Council hearing did not voice support for Cumbo’s bill. The administration prefers an inter-agency approach instead, Camilo said. “We have been working across the agencies that have the expertise to inform the guidance,” she said, adding that agencies “are the best experts” at addressing their internal needs and that “it can’t be a cookie-cutter approach.”

When asked about planning for phase 2 by Cabrera, Camilo said “we don’t have finalized plans,” despite phase 2 potentially being days away. De Blasio said similarly at his Tuesday morning briefing.

According to Camilo, the Mayor’s Office has not yet received plans from all city agencies about their individual reopenings, adding, “I’d rather be conservative in the approach,” given this process has never been done before.

Camilo said that the city “do[es] not have an enforcement part of our guidance,” but that “I don’t think anyone will want to take a gamble on the health and safety of their workforce.” Cabrera and Cumbo both voiced concerns about agencies having enough lead time to comply with city protocols ahead of the next phases of reopenings.

During the public comment portion of the hearing, an employee with the Parks & Recreation Department expressed his concern about the city’s plans for reopening. When asked by Cumbo, he said that he wasn’t aware of any channel for reporting coronavirus-related safety concerns.

During the hearing, Cabrera mentioned several times that New York City could potentially move to phase 2 of reopening on Monday, June 22, which would mark two weeks after the city entered phase 1. However, there have been no official announcements regarding that as of now.

At his Tuesday press conference, de Blasio talked about trying to “keep expectations low” and that the city and state “may want and need a few more days to get more data beyond June 21 before moving to the next phase of reopening. The mayor also promised more city guidance would be publicized “over the next few days” and the city “will be ready for next week, if the indicators and the discussions with the state tell us that we’re ready to go next week.”