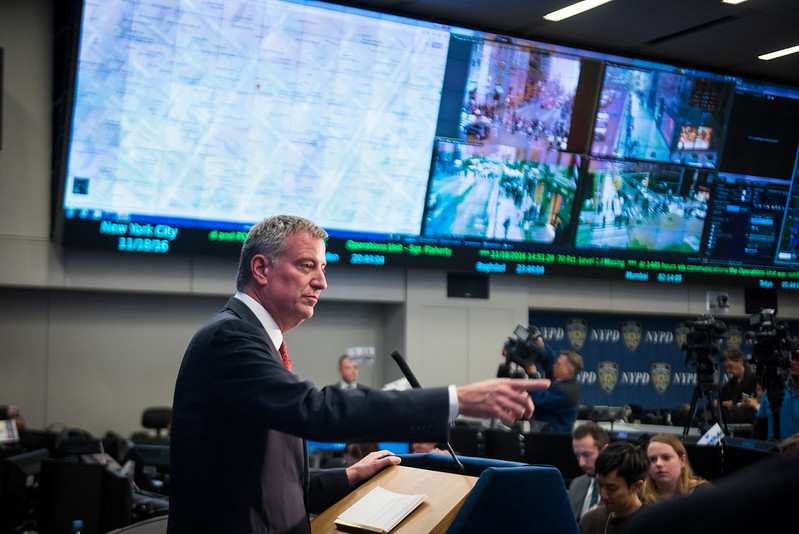 A long-stalled bill meant to shed light on the surveillance equipment used by the NYPD has suddenly moved through the City Council with the support of Mayor Bill de Blasio, despite being virtually unchanged since the mayor and NYPD leaders raised dire alarms about it in recent years. Now de Blasio is breaking with his own police department, which he has maintained has been on board with a slew of recent changes to NYPD oversight and discipline in the wake of national unrest.

The Public Oversight of Surveillance Technology (POST) Act would require the police department to report what monitoring equipment it has and the rules governing its use, which is almost entirely unknown outside of the NYPD. The City Council, which passed the bill 44-6 Thursday, says it will provide much needed transparency on how spy tech is used on members of the public, but the mayor and NYPD have for years said it would pose a threat to officers' safety and that decades of progress thwarting terrorist plotters would be lost. Department officials continued to speak out against the act as it was being passed.

Yet on Wednesday, in response to questions from a reporter about whether he would sign the bill, de Blasio said that he does indeed support it. "I've looked at [it] carefully and, as I think I said to you, my concern was to balance transparency with our ability to deal with profound safety concerns, including terrorism, which unfortunately still is a part of our lives. But I am convinced that the wording of the act is appropriate, is balanced, so I'm comfortable supporting it," he told Jillian Jonas of WBAI radio at a press briefing, who asked him about the fact that Council leaders had announced plans to pass the bill, which was first introduced in 2017 during the last Council class and de Blasio's first term.

The legislation has not changed substantially since it was first introduced in June 2017 and the NYPD still strongly opposes it. In a statement to Gotham Gazette Thursday, shortly before the POST Act was passed, NYPD spokesperson Detective Sophia Mason wrote: "With a minor change, this bill would achieve both transparency and public safety and safety for our most vulnerable officers, our undercover police officers. Unfortunately, the version being voted on today does not achieve these goals."

"To be clear, the bill, as currently proposed would literally require the NYPD to advertise on its website the covert means and equipment used by undercover officers who risk their lives every day. No reasonable citizen of New York City would ever support that," she wrote. Mason did not specify what the "minor change" was that NYPD had sought.

The POST Act mandates the NYPD publish the "description and capabilities, rules, processes and guidelines, and any safeguards and security measures designed to protect the information collected," according to the Council's plain language summary of the bill. It also requires the department to solicit public feedback on usage policies before finalizing them.

NYPD officials have maintained that revealing how surveillance technology is used would give terrorists and organized crime a step-by-step guide to avoiding the department's eyes and ears and could endanger undercover operatives and witnesses.

Last fall, the police department had roughly 2,000 members working in its intelligence and counterterrorism units, according to Deputy Commissioner for Intelligence and Counterterrorism John Miller, speaking on the Max and Murphy podcast. In the two decades since the September 11, 2001, terrorist attacks, the city's Joint Terrorism Task Force expanded from a dozen detectives to over 100, Miller said. During that time, the NYPD has purchased military grade surveillance equipment, from cell phone monitoring devices, and X-ray vans, according to a statement from Council Speaker Corey Johnson, to thousands of security cameras and license plate readers. How exactly those technologies are used and interact with the new frontier of artificial intelligence, like facial and speech recognition, is not known.

Over the same period, the nature of terrorist threats in New York City has changed almost entirely from large-scale attacks made by complex terrorist organizations, like Al Qaeda, to lone-wolf rampages by radicalized individuals, Miller said. The police have been using surveillance since well before the NYPD had a counter-terrorism office, and Miller frequently noted the POST Act could also endanger narcotics operations, raising questions about the extent of public surveillance within and beyond the scope of counter-terrorism.

The assertion that the POST Act could jeopardize officer or public safety is "plainly wrong because we are only requiring a privacy policy associated with new technology," said one the bill's original sponsors, former Council Member Dan Garodnick, in an interview. "This equipment today is bought in secret, used in secret, and there is absolutely nobody outside the NYPD who could attest to the fact that New Yorkers' privacy is being protected."

"Today, NYPD surveillance often is no better than digitized stop-and-frisk. These programs are biased, broken, and deeply damaging to a democratic society," wrote Albert Fox Cahn, executive director of the Surveillance Technology Oversight Project, which advocated for the legislation.

Garodnick and NYPD officials had several tense back-and-forths after the bill was introduced.

In June 2017, de Blasio said he opposed the bill because privacy protections were "baked in" to police practices and that "real checks and balances" were already in place, AMNY reported. Last week, the mayor told reporters, "I would have to see the language," before he could support the legislation.

The language is largely unchanged, except for a provision requiring the impact and use policies include an analysis of potential disparate impacts on any protected group defined in the city's Human Rights Law, according to Michael Sisitzky, lead policy counsel at the New York Civil Liberties Union, which supports the bill. "Otherwise, there’s just some technical things like renumbering of sections," he said.

After co-sponsoring it last session, Council Member Vanessa Gibson reintroduced the bill this session (Garodnick was term-limited out of office after 2017), and there have been similar exchanges between members of the Council and the NYPD at hearings where the bill has been considered. Earlier this week, Johnson, Gibson, and other Council members decided to advance the bill along with a package of other police reforms against the backdrop of weeks of protest.

The mayor's newfound support for the bill is part of a slew of about-faces he has taken on police issues in recent days in response to massive protests demanding changes to police practices -- and widespread criticism that he has aligned with the NYPD over demonstrators despite fashioning himself as a police reformer. The mayor's office did not answer questions about how he has come to support the bill after long siding with his police department.

Police Commissioner Dermot Shea, who had been a regular fixture of the mayor's daily briefings, has been absent in recent days as the mayor has announced significant changes to NYPD transparency and discipline.

Along with the two public hearings, the NYPD met with the bill sponsors to share concerns several times since it was first introduced.

Last fall, Deputy Commissioner Miller said on Max & Murphy, "We said if you made these changes this bill could work for both causes. Both transparency but not so much transparency that we would either be letting criminals get away or putting police officers or witnesses or victims in danger -- and they took copious notes." But Garodnick returned with the same bill, Miller said, having addressed none of the department's concerns.

"Despite these reasonable discussions, the council has repeatedly introduced the same bill with no changes," wrote Detective Mason, the NYPD spokesperson, Thursday. "The NYPD cannot support a law that seems to be designed to help criminals and terrorists thwart efforts to stop them and endanger brave officers."

"It became clear to me that they did not want to have a serious conversation about how to address any concerns they might have," Garodnick said Thursday. "They just wanted to kill the bill. I can't even say that I could articulate what their specific [requests were] -- and I was always willing to have that conversation."

In an op-ed published in the Daily News Thursday, Felicia Richards and Larry Fuchs, presidents of the NYPD's Guardian Association and Hispanic Society, respectively, wrote that an additional sentence in the bill could go far to protect undercover officers and informants: “The Police Commissioner will have the authority to exempt from this reporting any device(s) used by officers acting in an undercover capacity, or individuals acting at their direction (informants or cooperating witnesses) if the description of the technology or device and public disclosure of same would endanger the lives of police officers or others.”

It’s unclear why the officials waited until the bill was being passed to provide that sentence publicly.

Asked why she thought the bill was moving ahead now, Gibson told Gotham Gazette, "Today’s vote would not be possible without the Speaker’s leadership on this issue and the persistent push from several of our civil rights and civil liberties groups that have been by our side from the beginning."

"The decision to move forward with a vote on the POST Act is a tremendous win for us and all of the amazing advocates that have supported this bill since its conception," she wrote in an email.

"This is an important transparency initiative to protect the privacy rights of New Yorkers and to provide real oversight of the NYPD," Garodnick said. "That's what it was then and that's what it is now. The difference is that there is now a will to get it done."