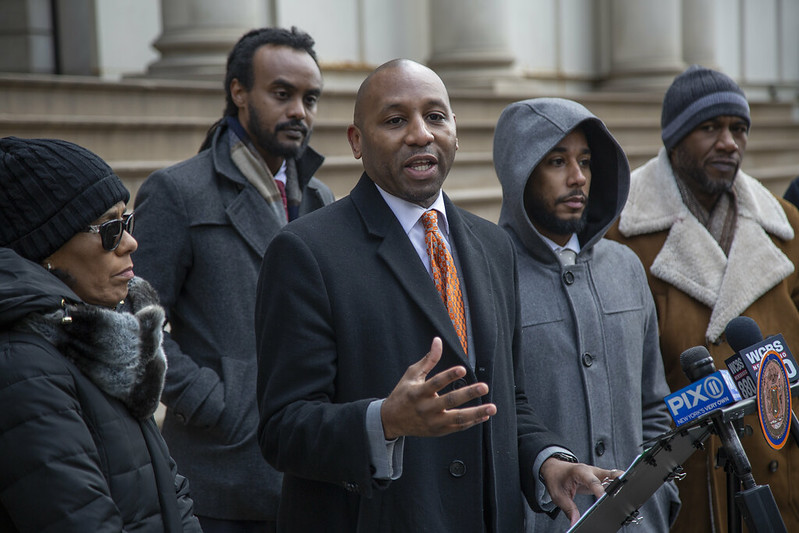 With his victory in the June Democratic primary, City Council Member Donovan Richards is poised to become Queens’s next Borough President, replacing former Borough President Melinda Katz who vacated the office in January after being elected the borough’s District Attorney.

Richards, a Democrat who currently represents Council District 31 and chairs the Council’s public safety committee, will face Republican nominee Joann Ariola, the chair of the Queens County Republican Party, in the November 3 general election. With an overwhelming Democratic voter enrollment advantage in the borough, Richards is all but assured to win. Queens has not elected a Republican borough president since James Lundy in the 1950s. In the 2016 presidential election, 75.4% of Queens voters supported Democratic nominee Hillary Clinton over native son Republican Donald Trump, who received just 21.8% of the vote in his home borough.

Borough presidents have a prominent perch from which they can influence city policy. They play a significant role in land use decisions in their respective boroughs, though they do not have a binding vote. They serve ex officio on several municipal boards, and make appointments to Community Boards, the citywide Panel for Educational Policy, local Community Education Councils and the City Planning Commission. They can sponsor legislation before the City Council, though they cannot vote on it. They also control millions of dollars in capital funding for infrastructure projects.

Last week, Richards sat down for an interview on the Max & Murphy podcast, co-hosted by Gotham Gazette executive editor Ben Max and City Limits executive editor Jarrett Murphy. In the interview, he outlined his vision for the office and what his priorities would be if he wins the general election. “Our record spoke for itself,” Richards said of his primary victory, pointing to his work in the district, particularly on the recovery from Hurricane Sandy.

“When you look at the crisis we overcame in the Rockaways, for instance, and how we’ve been able to rebuild the community back, but do it in a way that certainly addresses many of the systemic issues that residents were impacted by,” he said. “I think that’s what Queens residents are looking for. They’re looking for leadership and I think they will speak loudly in the general election on where this borough needs to go.”

Richards is steeling himself for the coming months, not just for the general election but for the expected second wave of the coronavirus that could possibly hit the city. Richards’ district, which encompasses parts of neighborhoods such as Laurelton, Rosedale, and the Rockaways in Southeast Queens, has been one of the areas hit hardest by the Covid-19 pandemic and, he noted, nearly 2,000 people in the district have died.

“The biggest thing is preparing for the worst,” he told Max & Murphy. He fears that historically underserved communities such as Southeast Queens will be at highest risk during a second wave. “We’re talking about decades of disinvestment and it’s going to take decades to get us out of the hole,” he added, although he did commend Mayor Bill de Blasio’s administration for investments made in the community in recent years.

Richards was particularly critical, however, that the outer boroughs continue to be ignored in the city’s response to the pandemic. He noted, for instance, that the Department of Small Business Services has given over 56% of its coronavirus-related grants to businesses in Manhattan; only 17% of grants went to Queens businesses. “We’ll be watching that closely to see equity in the distribution of these funds moving forward, so we can help these small businesses stop the bleeding,” he said.

During the interview, Richards emphasized that economic development would be the path Queens needs to take to recover economically from the pandemic. “A large part of the strategy has to be around public-private partnerships,” he said, noting that New York is unlikely to receive substantial aid from the federal government under the Trump administration.

Richards was a vocal proponent of the ill-fated Amazon HQ2 deal that was meant to create 25,000 jobs in the city, and he has repeatedly expressed support for similar development deals. During the campaign, he was backed by the Real Estate Board of New York and accepted campaign contributions from real estate developers, while some of his opponents eschewed developers’ donations.

He emphasized that he believed in accountability and transparency on the promises that developers make to a community, and has said that he will never be beholden to real estate donors. “You have to be a part of this conversation, because there are legitimate fears out there & we have to acknowledge that,” he said. “But at the same time there can’t be a cancel culture either. Leadership isn’t saying that jobs aren’t for my community, leadership is fighting like heck to ensure that those jobs are going to your community.”

With his primary victory, voters seemed to back Richards’ strategy for growth and development. In the interview, he said “Absolutely, it was a mandate, because I didn't shy away from growth. That word has become poisonous for some reason in our city. And part of the reason is the de Blasio administration has done a poor job in spelling out accomplishments, like downtown Far Rockaway.”

When asked about the possibility of a local Council Member opposing a project in their district that Richards, as Borough President, would hypothetically support, he said, “I didn’t come here to win a popularity contest. Sometimes somebody else’s approach may not be my approach, but my template is very simple: Will the community benefit?”

“I don’t plan on being gentle,” he added. “I do plan on playing an oversized role in a lot of these discussions, with the community and the Community Boards as well, to ensure that we’re not just saying no because we don’t want density. No, how do we leverage that density?”

“I plan on certainly being a lot more active in the space. There needs to be a lot more expertise on land use,” Richard said, saying that he would “ramp up” land use expertise in the borough president’s office. “We should be coming up with that plan and presenting it to City Hall.”

As borough president, Richards also wants to shake up the composition of community boards as well as implement term limits (although, those have already been added to the City Charter through a 2018 ballot referendum). “We need to make sure that these community boards are diversified, that there are new voices and younger people at the table, because everybody has a different lived experience,” he said. He indicated that he wanted to see community board members go through bias training. “I go to some Community Boards and you’d be astounded at the things you hear,” he said.

When asked if he thought any neighborhoods in Queens were ripe for upzoning and greater density, Richards pointed to Queens Boulevard, which is also where Queens’ new community jail facility is expected to be built as part of the mayor’s plan to shutter Rikers Island and replace it with borough-based jails. Richards also said the Far Rockaway waterfront and Long Island City could be potential sites for upzoning.

Even as he runs for borough president, Richards still has important duties to carry out at the City Council. He has chaired the Council’s Committee on Public Safety, which oversees the NYPD and the Civilian Complaint Review Board, since the beginning of the current Council term in January 2018. As chair, he has held oversight on various aspects of NYPD conduct, including its enforcement of marijuana laws and school safety, and championed police reform legislation that was recently approved, including the creation of a “disciplinary matrix,” which would establish clear and transparent guidelines for internal discipline within the NYPD. He also previously secured $70 million in funding for a new police precinct in his district but those funds were rescinded in this year’s budget.

Richards notably voted against that budget because it did not go far enough to cut funding for the NYPD and reinvest it in communities of color, a demand that was central to the contentious budget negotiation in the aftermath of the George Floyd protests against systemic racism in policing. The budget also cuts funds to the CCRB, which monitors and investigates complaints of misconduct and abuse of force by police officers. “I’m very concerned by the cuts to the Civilian Complaint Review Board and the lack of partnership between the police department and the CCRB when it comes to sharing body camera footage,” he said.

“We’re going to have to have some hard discussions,” he added, pointing to Governor Andrew Cuomo’s June 21 executive order which requires police departments statewide to “reimagine” policing and present reform plans by April 1 next year.

Among the reform proposals that Richards has indicated support for is mandating that NYPD officers live in the city. About 51% of uniformed officers don’t live in the five boroughs, according to a Gothamist report. If a residency requirement isn’t possible, Richards said the city could offer “incentives” for officers to live in the city.

Richards has also voiced concern over the NYPD’s DNA database, which he says has “grown astronomically” over the course of the last year, despite the department’s promise to remove people not suspected of a crime from the database.

Though he has been critical of the police, Richards has also emphasized his willingness to bring them to the table when discussing ways to hold officers accountable. Recently, as the NYPD has pushed back against a new law that criminalizes chokeholds and other similar restraint methods, Richards has said he wants to hear their concerns. “I do want to open the door to them, to have a conversation on that,” he said. But he was quick to add, “We’re not going to just kowtow to the department without having meaningful conversations about reform.”