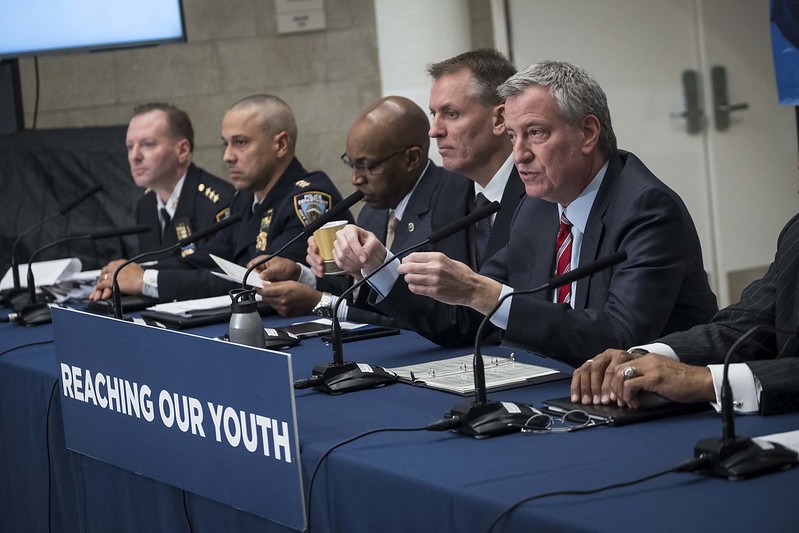 In mid-April, Mayor Bill de Blasio took a victory lap as the city’s daily jail population fell below 4,000 for the first time in nearly 75 years. It was a marked drop of almost 1,500 since the city went into lockdown because of the coronavirus pandemic, and was a result of several factors, including measures the mayor took to release hundreds of detainees whose health was at risk. But the jail population has slowly begun to increase, reaching 4,160 on September 1, as the city heads down a path to normalcy and amid a large spike in gun violence, rollbacks to bail reform laws, and calls by the police commissioner, among others, that too many defendants and detainees were being released.

On March 13, when the city was still coming to grips with the rapidly escalating pandemic, the daily jail population stood at 5,432, according to Department of Correction data compiled by the Vera Institute for Justice. By April 29, it dropped to a low of 3,809 before slowly beginning to increase, crossing the 4,000 mark on August 7. The number of people admitted to jails has fluctuated in that time but was slightly higher in August compared to March.

The recent uptick in the total jail population, according to a spokesperson for the Mayor’s Office of Criminal Justice (MOCJ), has been “driven by more people coming in charged with robberies, guns, and a series of non violent felonies.” Even though arrests have generally dipped this year, by as much as 60,000 according to a New York Post report, the NYPD has recently begun making more gun-related arrests, the mayor and police commissioner have said. Gun arrests are still down about 5.7% through August, according to the Post, despite so many more cases.

Over the course of years the de Blasio administration has taken significant steps to reduce the number of people in city jails. At the start of de Blasio’s first term in 2014, the jail population was 11,289, according to MOCJ. Since then, through a series of administrative measures and legislative reforms at both the city and state levels, including a recent state law that significantly curbed the use of cash bail, there has been a steady decline in that number.

Spurred on by the City Council, the mayor in 2017 announced a plan to close the scandal-ridden Rikers Island jail complex by 2026 and replace it with four borough-based jails, predicated on reducing the population down to 5,000 at least. The new jails are set to be built to hold a total of 3,795 beds, with the intention that only 3,300 people would be detained in the four facilities on any given day.

When the pandemic hit and it became clear that Rikers was becoming a hotspot for infections, the mayor and Governor Andrew Cuomo separately announced plans to release detainees in the jail system; roughly 300 detainees who were serving short sentences were placed into supervised release to serve their remaining sentences at home, while another 500 or so who were being held on technical parole violations were also let out. About 600 pretrial detainees were released through collaboration between prosecutors and judges.

“We have reached a historic milestone, and done so in a way that is both humanitarian and just,” de Blasio said in a statement on April 12, when the jail population fell below 4,000. “This achievement is one part of the overall effort to create a system that is smaller, safer, and fairer for all,” he added.

Advocates for criminal justice reform say the city should not squander what headway it made and should pursue policies that emphasize decarceration, particularly as the pandemic progresses and the city could see a second wave of the coronavirus.

“What we're kind of seeing now is that there was a lot of pressure initially to keep people out of jail, obviously very dangerous congregate settings, and that’s changed...Just more people are being sent to jail now than there were before,” said Nick Malinowski, civil rights campaigns director of VOCAL-NY, an advocacy group and service provider.

As Malinowski pointed out, the court system has been partially stalled by the pandemic, which means that detainees have little recourse of being released even as arraignments continue. While the mayor has called for the courts to resume full operations, it’s because he believes it will help stem a recent uptick in gun violence. Along with NYPD Commissioner Dermot Shea, de Blasio has said that prosecutions of gun arrests cannot be completed because grand juries cannot be convened.

“The intention from the mayor's office and the police commissioner's office of sort of provoking the court to start stacking people in there for misdemeanors again was not to move cases for people who are incarcerated,” Malinowski said.

Public defenders have also said that the suspension of grand juries has simply meant that some individuals are being detained for longer. "To the extent that the court is not functioning to its full capacity, the result is more people being held in jail than previously would have been,” said Alice Fontier, managing director for Neighborhood Defender Service of Harlem, in an interview with Gotham Gazette in late July. To add to that, people continue to be sent back to jail for technical parole violations, as The City recently reported.

City Council Member Keith Powers, chair of the Council’s Criminal Justice Committee, said the state Legislature needs to approve a bill that would limit detention for those types of minor violations. “I have long advocated for the passage of the Less is More Act, which would help to reduce the jail population and reduce the detainment of people in on technical parole violations,” he said in a statement. “I urge Albany to pass that legislation as soon as possible before a potential second wave of COVID-19.” On September 21, Powers’ committee will hold an oversight hearing to examine how the Department of Correction has responded to the Covid-19 crisis.

What worries reform advocates is that the mayor and commissioner continue to question policies that would reduce the city’s reliance on incarceration as a public safety solution. Police Commissioner Shea, for instance, in a July 6 interview on NY1 blamed the rise in gun violence in part on the release of detainees from Rikers. “Look at the Rikers population of the last year...it’s about half,” he said. “Where is that other half right now? We’ve transplanted general population to the streets of New York City and it’s extremely frustrating.”

Shea has questioned if the city jail population shouldn’t be closer to 10,000.

As Malinowski pointed out, “You have a police commissioner and the mayor relying on these old themes, tough-on-crime kind of rhetoric, despite it not being backed up by any kind of data or evidence.” He noted that they both expressed strong resistance when the state first passed the bail reform law, which was later watered down with a change that went into effect July 1. “We need a realignment of how the government responds to issues in the community...We need to create a politics of compassionate care, as opposed to this punitive sort of politics,” Malinowski added.

“New York is just not ready to decouple this notion that we need to have a very high jail population or always be sending people to jail in order to you know, quote-unquote, be safe,” said Marie Ndiaye, supervising attorney of the Decarceration Project at the Legal Aid Society.

Ndiaye said the city should still be releasing as many people as possible, considering the pandemic is far from over. “You can't go inside and eat in a restaurant but you can be held in a congregate setting that's a jail,” she said.