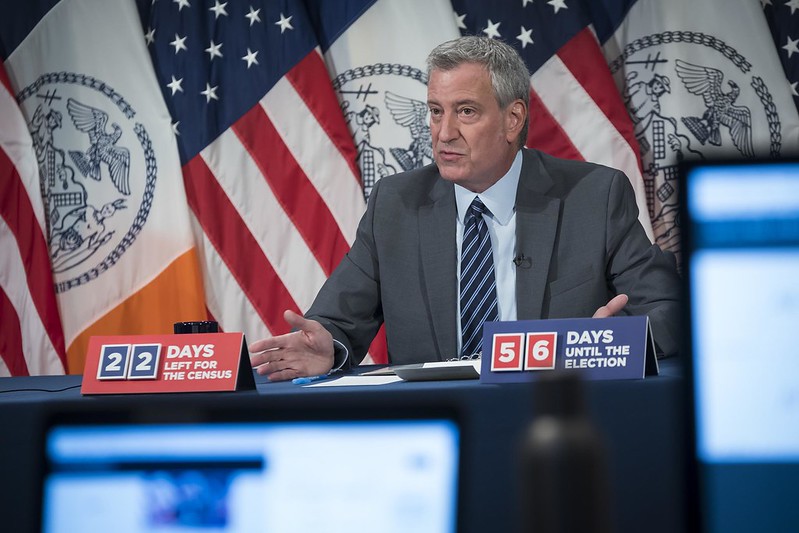 Mayor Bill de Blasio continues to insist that New York City needs authorization from the state to borrow billions of dollars in operating funds to balance its budget, at least in the absence of federal aid to cover some of the massive loss in revenue from the pandemic fallout. The drastically-slashed new city budget for this fiscal year passed July 1 included $1 billion in undefined labor savings, which de Blasio said could be covered by federal aid or borrowing, or, if neither of those come through, potentially 22,000 laid off municipal workers.

But as he’s beat the drum for authority to borrow $5 billion to be granted by skeptical state government leaders, the mayor has yet to present a detailed plan for how that money would be spent and repaid, creating concern among lawmakers and fiscal watchdogs that he wants a “blank check” for the city.

By the end of the month, the mayor must present the state Financial Control Board, an oversight body, with a plan to find the $1 billion in savings needed to balance the $88.2 billion budget for the current fiscal year. But the city’s budget woes don’t stop there. The budget gap for the next fiscal year is expected to be $4.2 billion, though it could be higher pending revenue forecasts.

For months, the mayor has said that the state Legislature should allow the city to cover those costs through long-term borrowing, at times expressing frustration and exasperation about the unwillingness of his fellow Democrats to act. But they have raised questions and sought a specific plan that de Blasio has yet to provide. Asked repeatedly for any plan that de Blasio may have at this point, spokespeople for de Blasio did not respond to Gotham Gazette inquiries this week. Other relevant parties indicated that there is still no plan.

After initially proposing to borrow $7 billion, the mayor lowered the request to $5 billion, which would be repaid over 30 years. In June, de Blasio wrote a letter to legislators in the State Senate and Assembly pressing for his demand, but it offered few details.

As de Blasio continued to press his case leading up to the finalized city budget, city and state officials -- from Governor Andrew Cuomo to City Council Speaker Corey Johnson and City Comptroller Scott Stringer, among others -- expressed skepticism about new borrowing.

On June 27, State Senate Majority Leader Andrea Stewart-Cousins, a Westchester Democrat, released a statement saying, “New York City is the economic engine for our nation and our state, and so it is a priority for the Senate that it remains economically strong and viable. Prudence requires the development of a plan not rushed through before action is actually necessary, especially when the possibility of additional federal aid remains unresolved. Mayor de Blasio has made it clear we have several months before drastic measures like layoffs would occur and other city leaders have sent mixed signals about the wisdom and efficacy of the current request. The Senate will work with our partners in Government including the Mayor, the City Comptroller, the City Council, the Assembly, and the Governor to help New York City. We are open to approving limited loan authorization but more work needs to be done to develop a consensus around a sound approach.”

A spokesperson for de Blasio expressed disappointment in the State Senate.

More recently, some officials including Stringer and Johnson have changed their stance, albeit while still saying they want to see a real plan from de Blasio. Cuomo has continued to argue against new borrowing by the city to pay for operating expenses, saying the state would ultimately be on the hook.

The mayor and labor union leaders have been lobbying the state Legislature to approve the borrowing authority, which would both remove the need to cut spending on labor and prevent layoffs. “I've been asking Albany for months for something very fair and simple – long-term borrowing, which the city has received in past crises,” de Blasio said on Tuesday. “Hasn't happened. We're running out of options. Now, I do believe labor's working real hard...to help us in Albany and to come up with alternatives. So, I'm going to hold out hope that that's how we can solve this.”

In a statement after publication, Julia Arredondo, a mayor's office spokesperson, said, "Long term borrowing is the fiscally responsible pathway to the City’s financial recovery. Without it, we face layoffs and steep budget cuts. We have had many conversations with the Council about our plan, and look forward to working together to protect the jobs of hard-working City employees and the programs and services that New Yorkers need and deserve."

The State Assembly nearly voted on the borrowing proposal in June – Speaker Carl Heastie has said he supports it – while the Senate majority remains open to the idea as well. "As we have said from the beginning we are willing to work with New York City to identify the best course forward without hurting working men and women and at the same time pursuing a fiscally responsible course,” said Mike Murphy, communications director for the Senate majority, in a new statement to Gotham Gazette. He did not say whether the mayor had presented a plan to the Senate. An Assembly spokesperson did not respond to a request for comment.

While Cuomo has so far been cold to the idea of allowing the city to borrow billions of dollars, the state itself has engaged in new borrowing as it struggles with lost revenue and prepares for potential cuts to local aid. Asked whether the mayor had given the state a specific borrowing plan, Division of Budget spokesperson Freeman Klopott pointed to the governor’s comments at an unrelated news conference on Long Island on Wednesday.

“The mayor has said he would have to lay off people if he didn’t borrow. I’m saying layoffs are the last thing you would want to do,” Cuomo said. “They’re the last option, especially in New York City where you have so many problems, you have the homeless problem, you have the crime problem, the city is dirty. So layoffs are the last option. But the $90 billion budget the City has, I’m sure there’s a lot of waste you can find. And that’s what you need to do before you go to borrow or lay off anyone.”

State Comptroller Tom DiNapoli had his own tough words for the de Blasio administration. “The city used non-recurring revenue and some questionable savings to close its 2021 budget gap, while revenue continues to lag. The fiscal problems are daunting now but the duration is uncertain, and borrowing cannot become a crutch,” DiNapoli said in a statement to Gotham Gazette. “The city must provide a detailed, realistic plan for managing its finances for the next few years before turning to borrowing. It should be a last resort.”

Stringer and Johnson continue to call for a comprehensive plan, which has yet to be produced, for spending and repaying the borrowing. “We are in an unprecedented economic crisis, and so far the federal government has walked away from its responsibility to provide the relief we need,” Stringer said in a statement to Gotham Gazette. “The Mayor needs to stop threatening to fire frontline workers and propose a transparent, comprehensive financial plan with borrowing as one component to balance our budget and protect workers while preventing irremediable damage to the economic and social fabric of our City. The Mayor doesn’t get a blank check.”

The City Council was preparing to hold a hearing on September 21 on a non-binding resolution sponsored by Council Member Helen Rosenthal urging the state Legislature to approve the borrowing proposal. Melanie Hartzog, director of the Mayor’s Office of Management and Budget was scheduled to testify. But the hearing has been postponed for the second time now. A Council spokesperson said in an email on Friday that they had expected the state Legislature to return to session, which it did not, and will reschedule the hearing once that occurs.

At a news conference on Wednesday, Johnson reiterated his support but explained what he wants to hear from the administration. “I want to avoid layoffs. That is a major reason why I support the ability to borrow long-term,” he said. “The administration has to come and participate in a meaningful way and take questions and answer them and outline their plans, their sequencing, and speak in a very specific, detailed substantive way on what they would use that borrowing authority for.”

He also said that the resolution from the Council, while potentially helpful to signal its buy-in on borrowing, is not what will or should make or break the request.

Rosenthal said in a phone interview that she hasn’t received any indication from OMB that they will provide a detailed plan prior to the hearing, or if one even exists. She said the lack of candor has been “frustrating,” particularly as the hearing was rescheduled to allow OMB officials to testify. “My gut, and I've been saying this for half a year now, is to allow borrowing, but they need to put a little meat on the bones,” she said.

“Here's everything we don't know. The amounts, over how many years. Do they have a plan for timing of paying the money back? Do they have any of those types of specifics and where are they with the labor savings?,” she said. She also noted that the city’s charter-mandated update on revenues and expenditures is due in November, when mid-year budget and four-year financial plan modifications will occur. “Are they starting to have a sense of how revenues are coming in compared to what was budgeted at the end of June?” she said.

“I guess the mayor's folks have a strategy on it,” she said of the overall plan. “I'm not sure what that strategy is because I would imagine the state people who are the ones who have to give us the authority are asking the exact same questions...Common sense would be, I think, that one would want to be as transparent as possible in order to justify to those who are giving you the authority, why you need it, and what your plans are.”

Rosenthal also said she’d been informed the Municipal Labor Committee will meet at the same time as the hearing, which may preclude labor leaders from testifying. “It'd be helpful to know where they are in those negotiations,” she said.

Note - this article has been updated with a statement from the mayor's office.

Note - this article has been updated to reflect that the City Council hearing on the borrowing resolution has been indefinitely postponed.