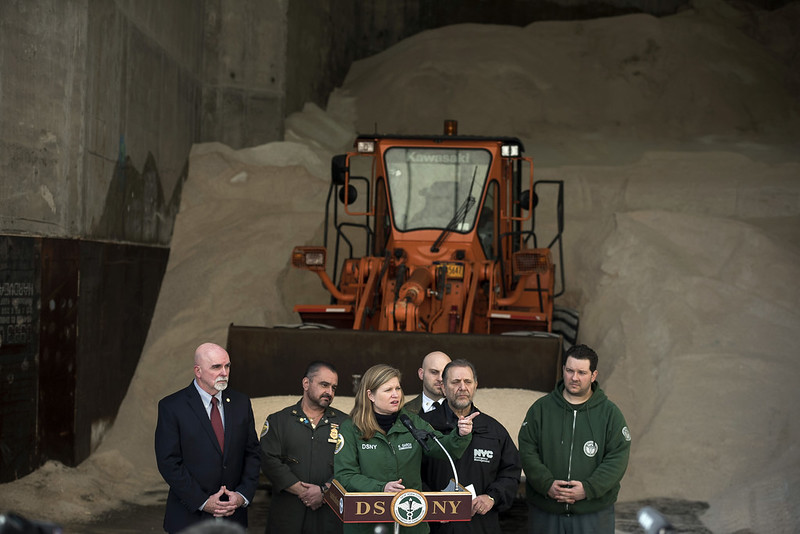 Earlier this month, Kathryn Garcia, a top official in Mayor Bill de Blasio’s administration, resigned after more than six years as commissioner of the Department of Sanitation. In her time serving under the mayor, Garcia has worn many hats beyond that of keeping the city clear of trash and snow. De Blasio entrusted her with leading the city’s effort to abate lead exposure among young children, named her the interim chair and CEO of the struggling New York City Housing Authority (NYCHA) for part of 2019, and then appointed her the city’s emergency “food czar” this year to ensure that hungry New Yorkers were fed during the coronavirus pandemic, all while she continued to lead the sanitation department.

In her at times terse resignation letter to the mayor, Garcia cited recent budget cuts to her department and the threat of major layoffs as the main reasons she could not continue to serve the administration. “This budget crisis is incredibly severe, but I am disappointed to see so much of the work we have done over the last six years being walked back,” she wrote. “If, as is often said, budgets are a statement of values, my values require me to resign in the face of these cuts, which will harm New Yorkers.”

But Garcia’s decision was also spurred by the fact that she is considering a run for mayor in the election set to take place next year, potentially joining a crowded field of Democrats who have declared or are exploring a bid to replace de Blasio when he is term-limited out of office. In a recent interview on the Max & Murphy podcast from Gotham Gazette and City Limits, Garcia explained her decision to step down, why she is considering a run for mayor and how she would approach the mayoralty, as well as her work covering the various responsibilities she was given by de Blasio.

If she declares, Garcia could be one of three women, all first-time candidates for elected office, who were formerly part of the de Blasio administration – Retired Army Brigadier General Loree Sutton, who was commissioner of the Department of Veteran Services, has already jumped into the race, while Maya Wiley, former Counsel to the Mayor who later headed the Civilian Complaint Review Board, is considering doing so. Besides them, Comptroller Scott Stringer and Brooklyn Borough President Eric Adams have already declared their campaigns, while City Council Speaker Corey Johnson continues to explore a run. Former nonprofit executive Dianne Morales left her job to run for mayor and has been actively campaigning for some time. Former top Bloomberg and Obama administration official Shaun Donovan is strongly considering jumping into the race and has been raising significant sums of money to do so. And other Democrats, like finance executive Ray McGuire are reportedly considering bids.

Garcia said her decision to explore a mayoral campaign was driven by the pandemic. “I am not sure that I would have gotten in if I didn't think the city needed a crisis manager at this point who would be really focused on core services for city residents,” she said, citing her own managerial experience in government.

Though she did not criticize the mayor by name, she drew a clear contrast in how she would handle the job of running the city. “I am incredibly good at creating very effective teams that really maximize a lot of people's talents,” she said. “There is not infighting on things that I work on. And the second thing is, I'm extremely clear about my expectations and I'm extremely clear about the fact that I expect accountability. You need to produce.”

De Blasio is known for being a micromanager and for overriding the advice of his own commissioners while relying on his own, often flawed, instincts. “I'm open to hearing other ideas. I'm not dictatorial. I do want to hear from people,” Garcia said. “I don't assume I'm necessarily the smartest person in the room on every topic. But after we have the airing of what you think might be a good way to go, we make a decision, we move on and we execute.”

As sanitation commissioner, Garcia has already led a uniformed agency and she said she’d bring the same perspective to bear over the NYPD, should she become mayor. De Blasio has, more often than not, had a soft touch with the department, often defending it against instances of egregious behavior while insisting that he is working to reform its practices. “I'm a tough but fair manager,” Garcia said, when asked how she would handle the police department. “You'll know what I expect of you and we will be ruthlessly transparent about that. I will stand up for you when I need to, but I won't if something really depraved happens.”

Since she’s an unknown political entity, the hosts -- Ben Max and Jarrett Murphy -- asked Garcia if there is a Democrat she most closely identifies with or would model. She would be an Ed Koch-like mayor, she said, describing her politics as “progressive and practical.” She would be a tough manager, she said, who constantly wants to know how she’s doing. She said it is essential that the mayor knows how city agencies are performing every day, in a data-driven way.

What all the candidates in the mayoral race have to contend with is the fallout of the pandemic. The economy has been devastated and the city faces a massive budget crunch, exacerbating the pressure to provide basic city services. Unemployment is at a high, though jobs have begun to slowly return as the city and state have reopened.

“We need to get people back employed across the city and then start to really think about building economic mobility,” Garcia said, acknowledging the challenges ahead. “And there are things that I think we can do more effectively but also in partnership with our broader commercial and business community.”

Garcia blamed the mayor for some of the many woes currently facing the city, particularly on quality of life issues. “I know that the city is confronted with a very severe fiscal crisis and I'm sure difficult choices had to be made,” she said of major budget cuts to the sanitation and parks departments. “I would just have made different choices. You cannot have the city come back to where it needs to come back to if you can't go to a park because it's dirty and...you're seeing litter baskets overflowing on street corners.”

“We aren't as transparent as we should be about our key performance metrics. The mayor should know at the end of the day, did we have a good day? Did we have a bad day? And that shouldn't be driven by what's in the news, necessarily. That should be driven by what are the numbers.” She also said she would “restructure, and consolidate and streamline” certain bureaucracies but would not name any particular agencies or offices.

Even tackling issues like redesigning commercial and residential waste disposal helped expose flaws in how the city handles problems. “What do we want from the public realm and how can we achieve that?” she said. “There's an enormous amount of competition for street space, parking spaces, restaurant space now, bike lanes, bus lanes, but I think if we start to reimagine it, we can achieve a lot of these varying goals. And we should also just be experimenting like crazy, rather than lots of studies. Let’s do something, try it, if it doesn't work, let's move on.”

Having served as interim chair and CEO of NYCHA, and then as vice chair of the NYCHA Board of Directors, Garcia offered specific criticisms of the city’s management of public housing. Though under de Blasio NYCHA’s operating expenses have been brought under control, the agency needs as much as $40 billion to bring all its developments to a state of good repair. The city, under current NYCHA Chair and CEO Greg Russ (and a federal monitor), has begun to implement a plan to raise those funds through a combination of programs including transferring several developments to private management under the federal Rental Assistance Demonstration (RAD) program and through an infill development program which would build mixed-income housing on unused NYCHA land.

Garcia said Russ’ plan has been “actually very creative” but said she wouldn’t have necessarily taken the same approach. “My feeling when I was at NYCHA was, there had been so much under-investment. So it didn't necessarily have to go in this way but there’s so much underinvestment, there's so much need, that whatever is the quickest way to get dollars that fix bathrooms and fix kitchens and make sure the heat’s working, I am supportive of.”

She said the infill program “would not be my first priority. My first priority would be to do the traditional RAD program as well as the plan that Greg Russ has come up with to use these vouchers and finance off of them. But I certainly would not turn away an opportunity that would generate money for NYCHA residents. Anything we can do to be creative, to generate money for them I think is very important.”