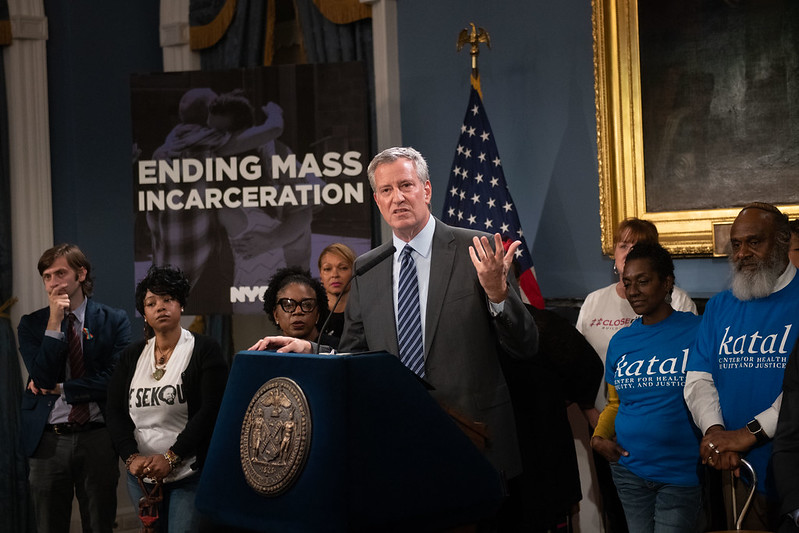 Defendants in New York City's pretrial supervised release program are no more likely to miss court than people who have bail set and are not rearrested at a higher rate, according to a city-commissioned study by MDRC's Center for Criminal Justice Research being released Thursday.

The research, contracted by the Mayor's Office of Criminal Justice (MOCJ) and the Mayor's Office of Economic Opportunity with funding from the Manhattan District Attorney, comes at a time when some city officials, including Police Commissioner Dermot Shea, have blamed a months-long spike in gun violence in large part on recent changes to the state bail law that increased reliance on alternatives to incarceration, like supervised release.

“You hear terms such as supervised release right now, that is a fallacy. There is no supervision. There is just release, and you are seeing the repercussions of that across the city,” Shea said in June.

MOCJ officials say the new findings vindicate the program. "I think being able to show that the program is just as effective as bail in ensuring return to court and also ensuring that folks are not being rearrested at a higher rate is really exciting," said Miriam Popper, the executive director of MOCJ's Office of Pretrial Justice Initiatives, by phone.

According to Popper, before supervised release, judges for the most part had two options at arraignment: they could set bail, a monetary condition for returning to court, or they could release the defendant on their own recognizance. "This evaluation has showed that adding a third option of support and supervision in the community was able to meet the goals of the New York State bail statute...just as effectively as a monetary condition," she said, "which as we know can often lead to an unequal system for those without financial resources and those with."

But while supervised release successfully diverted some candidates from having bail set without meaningfully impacting court appearances, the data shows it also led judges to assign supervision to defendants who would otherwise have been released on their own recognizance, a trend known as "net-widening" and viewed unfavorably by criminal justice reformers. The city and the nonprofit providers of supervised release programming say they are working to prevent net-widening from further ensnaring people in the criminal legal system, but defense attorneys are concerned by the findings.

Supervised release, a program first piloted in New York City in Queens in 2009 and expanded citywide in 2016, allows a defendant to remain in the community while they await trial under the condition that they follow a personalized plan of check-ins with a case manager and other service providers. Participants are often connected with services like employment training and housing support. The program has been lauded by community-based organizations as an effective and more just approach to treating those presumed innocent and ensuring defendants return to court, while also strengthening community ties.

Enrollment in supervised release increased the percentage of cases that were dismissed by roughly 10 points, while reducing the percentage of guilty rulings by 11 points, the study found. The analysis lends credence to the theory that the threat of being incarcerated with or without bail incentivizes defendants to plead guilty in order to be released.

The study also found that the program's impact did not vary across different racial, ethnic, or age groups, but "had stronger effects" on bail rulings and pretrial detention for felonies than misdemeanors, and for cases in Manhattan versus the Bronx, Brooklyn, or Queens.

Over the course of the study period from May 2017 to January 2019, defense attorneys sought supervised release for only a small portion of the roughly 287,000 defendants who were arraigned after a custodial arrest (this does not include people who received desk appearance tickets to be arraigned at a later date).

Seventy-two percent of arraignments (over 200,000) included charges that would've made the defendant eligible for supervised release, but only about one in ten of the eligible defendants were screened during the 20-month period, the study shows.

"The main explanation for this pattern is that defense attorneys opted to have their clients screened for SR only when they believed them to be at risk of having bail set, otherwise preferring to preserve their chances for being released on their own recognizance (ROR)," the report states.

Despite what the report identifies as the "gatekeeper" role of defenders to prevent net-widening, MDRC's modeling found that about 44 percent of people on supervised release would have otherwise been ROR'd. About the same percentage, 45 percent, would have received bail.

Reforms passed in 2019 and 2020 eliminating bail for most non-violent felonies moved that gatekeeper role from defense attorneys to judges, who now exercise greater discretion in setting pretrial conditions, according to Popper.

"What that means now is that it requires more training on our part, a really close eye on what the outcomes are and what is happening," she told Gotham Gazette.

Aubrey Fox is the executive director of Criminal Justice Agency (CJA), the nonprofit that first piloted the supervised release program in Queens and interviews every defendant as part of an assessment to determine the likelihood they will return to court. He said CJA's recommendation following the assessment, while non-binding on judges, can help ensure the program captures the right participants because guidelines call for individuals who are not eligible for bail and get recommended for ROR to receive it.

The MDRC report's authors point out that with the relatively small number of participants during the study period, few defendants were caught in this process.

But defense attorneys say it's more serious. "Our perspective on that and what we've seen is that judges and prosecutors don't in any way recognize that there is a harm to unnecessarily placing our clients on supervised release," said Libby Fischer, the managing attorney of the criminal defense practice at the Harlem-based Neighborhood Defender Service, in an interview.

"There are entire categories of cases where the DA's office asks for supervised release even though the cases are misdemeanors, even though the clients have no record," Fischer said. "And since the judges can't see or don't see the negative consequences of putting large swaths of communities of color under court surveillance, they set supervised release when it's asked for."

"If the request had been for bail, in old times, they would've understood the negative consequences and ROR'd the client," Fischer added.

The study also found that supervised release increased the average total time before trial by about two months (from 86 to 143 days) and doubled the amount of time spent in the community from 64 to 128 days. The percent of defendants who received desk warrants (which the report considers a good proxy for missed court appearances) increased from 24 to 34 percent, a finding the study called statistically insignificant because of other factors that created uncertainty that these outcomes "aren't just the result of chance," explained Melanie Skemer, the study's lead author.

"In a lot of alternative-to-detention programs, what ends up happening is they have the so-called 'supervision effect,' which means that people fail at a higher rate because they are being watched more closely," Fox said.

"The really remarkable thing about supervised release is that -- I think mostly because of the skill of the social workers who work on the projects and the kind of ethos of the program -- the program managed to avoid that pitfall of well-intended but creating unintended consequences of penalizing people more," he said.

Popper said supervised release employs a "graduated response" model that aims to provide a "light touch" whenever possible. "If someone comes into the program who is lower risk and might have otherwise been released on their own recognizance, unless otherwise assigned by the judge, they would be put on a low level of supervision," Popper said.

"While the type of people who are put into the program is really up to the judges at this point, there is a lot we can do within the program, such as these policies, to ensure that being in supervised release does not lead to deeper entrenchment in the system," she said.

"Proportionally, the estimated increase in time at risk is far greater than the estimated increase in bench warrants,” the report states. “Hence, when accounting for the time at risk of pretrial failure and the increased number of opportunities to miss court appearances, enrollment in SR does not appear to have increased failures to appear to court appreciably, if at all."