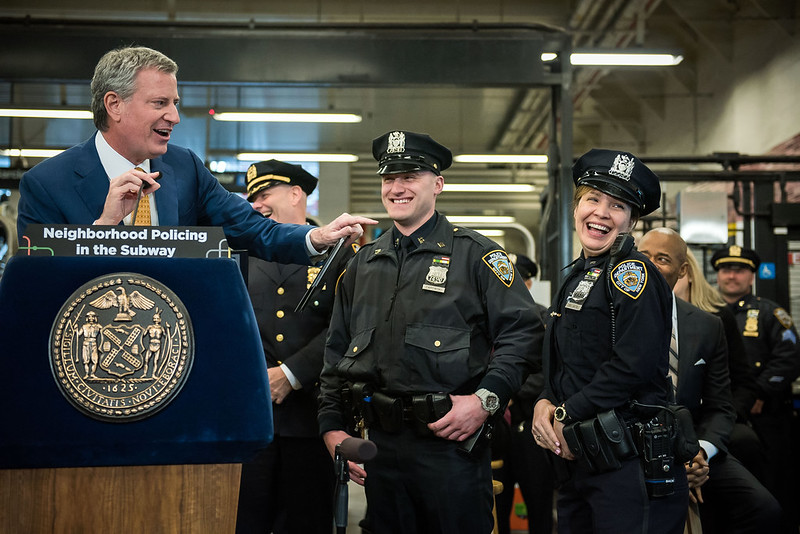 An external study of the NYPD’s neighborhood policing program, which Mayor Bill de Blasio and NYPD leadership have promised for years, has been delayed because of the pandemic, according to the company conducting the review. The results of the study, which is supposed to provide empirical support for one of de Blasio’s signature initiatives that he regularly credits for what he says are improved police-community relations, were originally due in mid-2021 and it’s currently unclear when they will be released.

De Blasio, who is term-limited out of office at the end of 2021, and all three of his police commissioners – Bill Bratton, James O’ Neill, and now Dermot Shea – have all boasted about making the city safer through what they call major shifts in policing paradigms that have changed how officers interact with New Yorkers. At the core of the administration’s approach is neighborhood policing, first launched in June 2015, which breaks up police precincts into sectors that are patrolled by dedicated officers, many of whom are tasked with building community relationships and allotted time away from having to respond to 911 calls.

As crime and arrests have continued to consistently fall during de Blasio’s tenure, with 2020 proving an exception on crime, the mayor and NYPD leadership have repeatedly lauded neighborhood policing as a success. But they have yet to produce any evidence that can directly support that conclusion despite promising for years that they will do so.

The program helped the administration and the City Council justify adding more than 1,000 officers to the police department and was meant to bridge a yawning trust gap between officers and communities and help reduce crime at a local level. The program has been rolled out across the city for nearly two years; in April 2018, the mayor even announced an expansion of neighborhood policing to the subway system.

In an interview on WNYC radio’s The Brian Lehrer Show on Friday, when asked about police reform, de Blasio said neighborhood policing was “revolutionary unto itself.” He’s previously defended the approach when expressing resistance to cutting funds for the NYPD. “We instituted neighborhood policing to create an actual, respectful dialogue between police and community, to actually get people to know each other. Because that's not what was happening in New York City before this administration,” he said in a September 18 interview on MSNBC’s Morning Joe.

Asked at a July 13 news conference about Police Commissioner Shea’s decision to disband the plainclothes “anti-crime unit,” de Blasio again touted neighborhood policing. “I think you have to understand that this whole seven-year effort has been to recognize that safety comes from a bond between police and community. That's what neighborhood policing has been about, and until the coronavirus, it was overwhelmingly successful,” he said.

The city had enlisted the RAND Corporation, a nonprofit policy research organization, to analyze the effectiveness of neighborhood policing. The nonprofit presented the NYPD with a preliminary report on the program last year – both RAND and the NYPD refuse to publicly release it – and was meant to issue a final report next year. But a RAND spokesperson said on Monday that the report will not be delivered on time.

“Because we have ongoing work on this topic, it’s not appropriate for us to address the topic of NYPD’s programs at this point in time,” said Warren Robak, the spokesperson, in an email. “Unfortunately, the pandemic has caused us to push back the timeline for our work with the NYPD. We will keep you informed as the project produces findings.”

There is little to no evidence about how neighborhood policing has affected crime rates in the city or whether it has helped improve trust in the police. Some police reform advocates have criticized the program as a fig leaf for a police department that continues to act with impunity, evident in aggressive crackdowns on largely peaceful protests in the last few months and refusal to wear face coverings during a pandemic, for example.

“Since its launch, the NYPD's neighborhood policing program has been nothing more than a public relations strategy and an expensive attempt to repair the NYPD's image," said Kesi Foster, spokesperson for Communities United for Police Reform, a coalition of activist reform groups, in a statement. “In the past months, there have been weekly - and sometimes daily - viral videos and accounts of widespread NYPD violence and abuse towards New Yorkers. The NYPD has proven time and again that they consider themselves to be above the law. Their refusal to swiftly fire officers who harm and violate the rights of New Yorkers strengthens their impunity. It's time to significantly reduce the NYPD's bloated budget and reallocate those funds to agencies and community programs that will help New Yorkers build safe and healthy communities.”

The RAND study is meant to examine changes in crime and measure trust between police officers and neighborhood residents, according to the RAND website. It will also “document how the philosophy has changed over time and summarize lessons learned in areas that implemented the program first.” But more than five years after initial implementation in select neighborhoods, there are no lessons to be offered and the administration seems to have even taken a step back to examine how the expansion of neighborhood policing has run into hurdles. THE CITY reported in July that the NYPD had engaged another outside contractor, Guidehouse LLP, to evaluate the program. That report, due in February of this year, has also not been released.

“We are very confident that neighborhood policing has been a meaningful benefit to the city and its residents,” said Alfred Baker, an NYPD spokesperson, by phone. Baker declined to offer any empirical proof of that claim or to provide either the Guidehouse or preliminary RAND studies.

Mark Winston Griffith, executive director of the Brooklyn Movement Center and a long-time police reform activist, said the neighborhood policing program has not made the slightest difference. “It's a public relations tool more than anything else. It's not a way of dramatically changing the relationship between police officers and civilians,” he said. Trust would come with accountability for misconduct, he said, noting how the NYPD has pushed back against reforms to disciplinary practices at every turn and has defended even some of the most flagrant examples of abusive policing. “I see community policing as something that they trot out at every instance to say that they're being responsive to community needs. I don't know how you can do that and then resist every attempt to be accountable,” he added.

Asked about the delay in the RAND study, Griffith said, “I don't think there are too many people out there holding their breath.”

The only survey information the NYPD has released in recent years came from a “Sentiment Meter,” an electronic survey created by Elucd Inc., a start-up in Brooklyn, which was contracted through CUNY in 2017. The survey, carried out through social media, judged on a scale of 1 to 10 whether New Yorkers trust the police and feel safe in their communities. The last release of that data was in September of last year – trust in police citywide increased to 6.6 from 6.1 over three years, while safety fell to 6.3 from 6.6 in the same time. That survey, however, did not directly ask questions about neighborhood policing and, the New York Post reported in August, the NYPD cancelled the contract.

Even as the department has refused to release previously promised surveys, the NYPD is launching a new effort to measure interactions with New Yorkers. Last week, Commissioner Dermot Shea announced a pilot program titled “How Did We Do?,” which will be rolled out at the 25th and 113th precincts through October before being launched citywide. Individuals who visit those precincts to file a police report, for instance, will be given a two-minute survey, which is also available online, through which they can provide feedback about the precinct officers’ performance.

“If we were Apple, we would care what the customers think when they walk into our store and make it as enjoyable as possible,” Shea said at the announcement. “Our customers are the people of New York City.”

“We're going to use it to evaluate, obviously these commands and all of the others that we roll it out to,” said Danielle Pemberton, Deputy Commissioner of Strategic Initiatives. “We'll use it to influence policy, make decisions around training, and really just look at how we can improve the work that we're doing in our communities.”