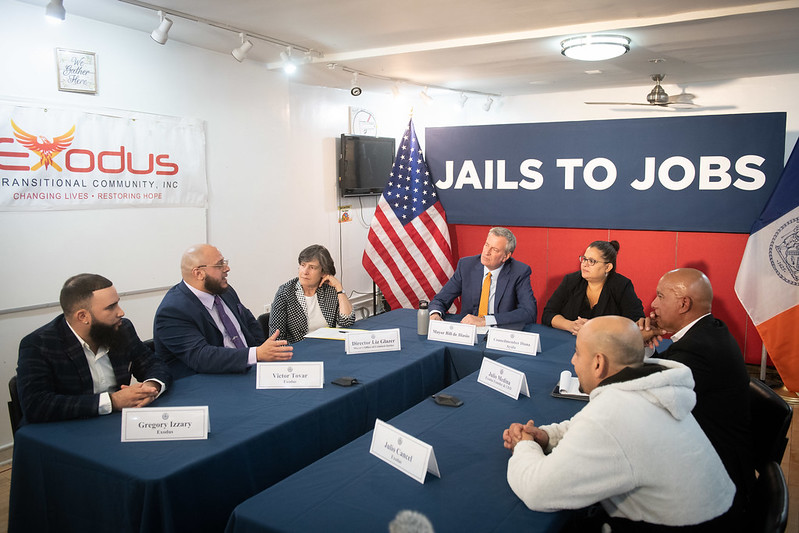 The mayor at a jails to jobs announcement (photo: Michael Appleton/Mayor's Office)

For Julio Medina, the onset of the coronavirus outbreak in New York City was going to pose a unique set of challenges. As executive director at the Exodus Transitional Community, Medina focuses on support and services for the formerly incarcerated, or re-entry services. When Rikers Island became one of the most densely COVID-19-infected areas, the city released over 1,500 people either being detained pre-trial or toward the end of their short sentences. But, advocates and service-providers say, a lack of coordination among city agencies in Mayor Bill de Blasio’s administration and between the city and service providers has deprived many of those released amid the height of the covid outbreak stable housing, medical care, and other essential services.

Medina, who is formerly incarcerated himself, has been working in and out of hotels used to provide housing to the recently-incarcerated since the beginning of the coronavirus outbreak in New York. After he got a call from the mayor’s administration, he’s been running services in hotels where the city is paying to house people released from jail amid the pandemic but who have no housing to head to. The challenge worsened given they had to scramble to secure benefits for the recently-incarcerated, especially medical care and personal identification.

“We didn’t know how many people would be released,” Medina said in an interview. “Some people required medication -- we didn’t know what they were because they were released without documentation, and they couldn’t pick up their ID cards. My staff was trying to go back to Rikers and get their property, and something as basic as that was hard to do.”

Medina was also informed that those who came to the hotels from Rikers were tested and not positive for COVID-19. However, he said there were 8-10 people in one hotel that they thought demonstrated some covid symptoms and told to quarantine. A lot of the confusion, he said, could have been avoided if there was stronger communication between the medical unit at Rikers and the various city agencies that provide essential services to those released from city jails.

Medina is among the many service providers who say that the de Blasio administration is setting them and the recently-incarcerated up to fail through a lack of communication and coordination.

Leading the call among advocates for a better system is The Faith Communities for Just Re-Entry, a diverse coalition of faith leaders advocating for the just treatment of people released from city jails. The coalition is calling for access to stable housing, medication, and COVID-19 testing for those released from Rikers Island jails, as well as better coordination among city agencies to provide essential services. The policy platform demands provision of identification upon release, transition of people’s health-care needs from Rikers, testing every individual for COVID-19 during the discharge process, ending the permanent exclusion policy by the city’s public housing authority, NYCHA, and dealing with landlord discrimination against the formerly incarcerated.

In 2017, de Blasio announced that by the end of that year, every person in the Department of Correction’s custody would receive reentry services to help connect them with jobs and opportunities outside of jail. This would be done in collaboration with the New York City Diversion and Re-Entry Council including city government agency representatives, the courts, district attorneys, public defenders, service providers, members of the faith community, formerly incarcerated individuals, and advocates. Those leaving incarceration would be matched with effective service interventions before and after jail. But according to service-providers and other experts, not enough is being done to ensure housing and medical care, especially for the larger-than-usual number of individuals released amid pandemic concerns.

While some being released from jail went to hotels, others went into traditional city shelters. Reverend Winnie Varghese of Trinity Church, which is part of the Faith Communities for Just Reentry campaign, said the system has been fraught with problems that the pandemic has only exacerbated.

“The jail sometimes doesn’t give you anything back and all you’re left is with the coat on your back,” she said. “You’re then given a pass to get on the subway, but that is either old or outdated. They end up going to an intake center, even though this person was leaving jail  and we knew that they were. But during a pandemic, shelter services can be complicated. The incarcerated who are homeless end up in an intake shelter, where they have to stay for 90 days to qualify for housing, but at the time of a pandemic this could prove unsafe for everyone at this point.”

Those who are recently incarcerated are given a housing voucher, but landlords, Reverend Varghese said, don’t take those vouchers because they are not set at minimum market rent and because of prejudice against the formerly incarcerated.

Meanwhile, in the city’s public housing system, at New York City Housing Authority (NYCHA), the process for attaining an apartment or moving into one includes a criminal background check for any new resident or temporary guest. Per NYCHA rules, those who are arrested on misdemeanor charges can be banned from public housing for a minimum of three years, while those arrested on felony charges can be banned for up to six years. Though the Family Reentry Program has been made permanent by NYCHA, few applications have been approved so far, according to Alison Wilkey, director of public policy at the Institute for Justice and Opportunity at John Jay College. This targets more Black and brown communities given their higher incarceration rates. “It’s like this never-ending perpetual punishment that people go through,” Wilkey said.

A spokesperson in Mayor de Blasio’s office did not provide a comment in response to questions about the re-entry process for the formerly-incarcerated, particularly those released under emergency coronavirus orders.

When the covid outbreak was still at its peak in May, advocates wrote to NYCHA to waive criminal background check requirements at the moment many individuals were being released from Rikers to decrease crowding in jails. The city was also trying to decrease crowding in congregate shelters. According to Wilkey, NYCHA refused to waive the requirement. “We need to think broadly about how people can access housing during COVID-19. And when you have rules like NYCHA permanently excluding people, how can families support each other at this time or get a new apartment?” Wilkey said.

“The pieces exist but it’s impossible to navigate as someone who’s just out of jail,” said Reverend Varghese. “Once you leave the jail, the jail is no longer responsible for you. The continuity of care has to happen while in jail. There needs to be a pipeline that goes into our jails and out of city services.”

Medina believes the lack of communication showed during the pandemic. Those who were released immediately, he says, had no clothing, no medication. “We need point people from big systems to communicate with one another,” he said. “People wanted to help but it’s difficult to move things without getting 20 signatures in the bureaucratic process...it’s just a simple fix.”

Yung-Mi Lee, Legal Director at the Brooklyn Defender Services, said there was little clarity and no communication provided in the process of releasing hundreds of detainees. “Other than clients reaching out to us asking us what was happening, just knowing that we can help with coordination efforts would have made a difference,” she said. “We could have come in and helped with reaching out. But that requires constant communication.”

“This is on the mayor’s desk,” said Reverend Verghese. “And these are vulnerable, unpopular New Yorkers. If the mayor decided that this population was a priority, all the pieces exist within city government and their coordination is key. No department can do it alone.”