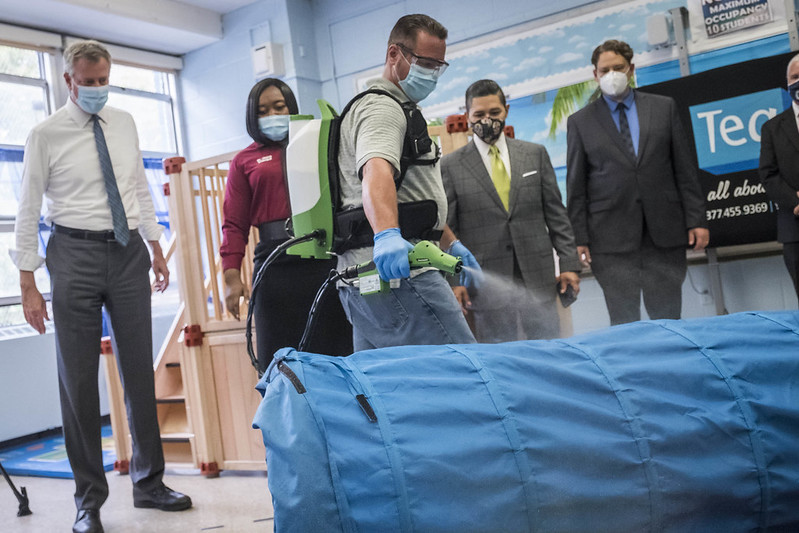 The COVID-19 pandemic has cost more than $4 billion in direct New York City expenses through mid-October, almost all of which the city expects to pay for with federal dollars.

Of the total spending, $4.08 billion has been registered in contracts, according to a report from City Comptroller Scott Stringer. Almost two-thirds of that funding, $2.44 billion, went towards food-related contracts (over $1 billion), personal protective equipment ($742 million), and hotels ($651 million).

In addition to PPE, a large amount of spending went directly toward covid-related medical expenses, like staff, supplies, and testing. The city's medical staff contracts alone amount to $505 million and testing centers have so far cost another $100 million. A total of $390 million has been spent on medical, surgical, and lab supplies, including $141 million on ventilators alone.

As the city worked to contain the virus' spread while moving much of public life online, costs for decontamination, telecommunication, and emergency mortuary and burial services rose.

Dozens of city agencies have earmarked covid-related expenses, with the Department of Citywide Administrative Services, which handles a great deal of city contracting, receiving the most -- close to $1 billion, according to the Independent Budget Office. The next biggest agency spenders on direct covid response matters were the departments of sanitation, emergency management, and homeless services.

Stringer's office estimates $4.6 billion in total has been committed or spent on covid relief and response by the city. The city's June financial plan outlines close to $4.3 billion in federal funding for covid expenses across Fiscal Years 2020 and 2021, according to Laura Feyer, a spokesperson for Mayor Bill de Blasio (the Mayor's Office could not verify the Comptroller's figures without the reporting criteria). The current fiscal year, FY 2021, runs through June 30 of next year.

“New York City is doing the work to drive down COVID-19, despite losing billions of dollars in tax revenue due to the crisis," Feyer wrote in an email. "We need the federal government to step up and pass a stimulus that includes aid to localities, or we face very painful choices.”

While it continues to call for federal funding to fill its budget gap and for additional aid for struggling New Yorkers, businesses, and other entities, the city plans to have 75% of the direct covid expenses, which are constantly growing, reimbursed through FEMA, pursuant to an emergency declaration. Most of the remaining 25% will be covered by federal funding from the CARES Act, the major relief package passed by Congress and signed by the president, with the city paying for the rest.

The FEMA reimbursement and much of CARES Act funding both offer wide latitude for spending, according to an expert at the city's Independent Budget Office. The Mayor's Office told Gotham Gazette no covid-related spending was being used to close budget gaps, though.

"The pandemic created new spending demands and will continue to do so," wrote Jonas Shaende, Chief Economist at the Fiscal Policy Institute, a nonprofit think tank, in an email.

"COVID-related expenses began with funding for personal safety equipment and other needs for first responders, and now we are seeing other expenses, including housing the homeless and food assistance,” Shaende wrote. “The disruption to our economy and social upheaval has yet to end, and the need for revenue to meet these new challenges is on-going.”

A total of $3.54 billion has been spent, including contractual and non-contractual spending, which includes personnel costs like overtime, and other funding like subsidies to Health + Hospitals, the city's public hospital system, which is also overseeing its test and trace corp, as well as grants and loans from the city’s Department of Small Business Services.

The city expects 75% of its direct covid spending to be reimbursed by FEMA under an ongoing emergency declaration, signed in March, that covers the period from January 20 on. Feyer said no submissions to FEMA have been denied.

The city received $5.34 billion in CARES Act funding, of which an estimated $1.45 billion was part of the Coronavirus Relief Fund, a type of block grant for general purpose covid relief, according to a May 2020 report from the city’s Independent Budget Office. Feyer said FEMA and the Coronavirus Relief Fund make up the bulk of the city's coronavirus funding sources but other CARES Act grants and city dollars also contribute to the total.

MWBE Covid Contracting
Minority- and women-owned businesses (MWBEs) made up roughly a quarter of city contracts for the direct covid spending, but accounted for only 10% of the total spending -- or $454 million, according to data provided by the Mayor's Office in response to a Gotham Gazette inquiry.

Less than half of that, just $206 million to date, according to a spokesperson for Stringer, citing figures from NYC Checkbook, has actually been paid to MWBEs, who have struggled under economic contraction and state restrictions due to the pandemic.

According to a survey of 500 MWBEs conducted by Stringer's office in July, two-thirds of respondents said they were "ready and able to contract with the City on COVID-19 response efforts" but that only 62 businesses competed for such opportunities "due to onerous restrictions and non-responsiveness from the City," the report states. Ten out of the 500 MWBEs surveyed in July received a covid-related contract.

A vast majority of respondents said they would not be able to maintain operating expenses for more than six months. Payroll and rent were cited as the biggest challenges.

“MWBEs are the lifeblood of our commercial corridors - driving economic growth and employment opportunities across New York City. But MWBEs continue to face barriers to accessing COVID-related contracts and critical government funding, and our survey found that 85 percent reported they cannot survive the next six months," Stringer wrote in an email to Gotham Gazette Monday.

Many MWBEs could not operate during the state of emergency and almost none (only 5%) received private sector aid, the survey found. At the time, about a quarter did not apply for government relief, either because of restrictive requirements attached to funding or they did not want to incur debt. Others didn't know relief was available or funding sources ran out before they applied.

"We can't leave engines of local wealth creation behind if we're serious about bringing the city out of our current economic crisis. It's time for real relief for MWBEs and real action from City Hall to dismantle systemic barriers to economic opportunity,” he said.

The Mayor's Office says it went beyond what the law required by setting MWBE goals for emergency contracts and has worked with agencies to proactively identify MWBEs in competitive sectors.

“During the height of the pandemic, our first priority was getting hospitals what they needed," wrote Julia Arredondo, a City Hall spokesperson, in an email Monday. "We expedited the procurement process and worked with vendors who could deliver in mass quickly. Building up M/WBEs has been central to this administration, and we have made strides to remove systemic barriers to participation, increase discretionary amount for M/WBEs, and address disparities in access to capital.”

The administration has also allowed for goods, services, and construction valued under $500,000 to be procured from MWBEs outside a formal competitive process, Arredondo said. The city has more than tripled its MWBE contracting -- from 8% to 28% of contract dollars -- and awarded a total of $17.1 billion since FY2015, she wrote in the email.