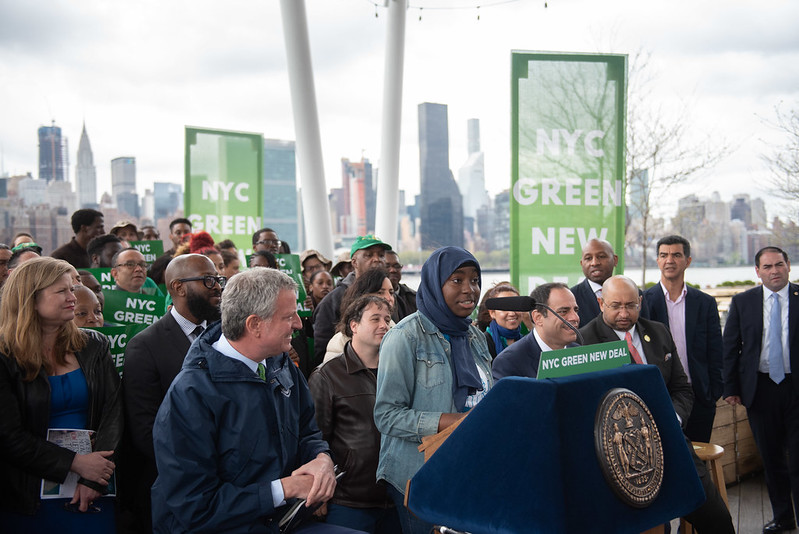 With the city still in the process of a somewhat halting “reopening” and attempting to rebuild its struggling economy, a coalition of environmental justice advocates, labor unions, faith leaders, and elected officials is calling for an economic recovery plan that they estimate would create more than 100,000 jobs in three years, prioritizing communities of color with environmentally sound investments that can also meet the city’s goals of fighting climate change.

The $16.2 billion plan, the “Climate And Community Stimulus Platform,” will be released in a virtual news conference on Tuesday afternoon by the Climate Works for All coalition, which is made up of more than 50 organizations. The coalition is coordinated by The Alliance for a Greater New York (ALIGN). The coalition will be joined by City Council Members Costa Constantinides, Antonio Reynoso, Ben Kallos, Brad Lander, Justin Brannan, Mark Levine, and Carlos Menchaca, along with several leaders from prominent labor unions and environmental advocacy groups. Comptroller Scott Stringer, a leading 2021 mayoral candidate, has also expressed support for the plan, according to ALIGN.

The detailed plan proposes a broad strategy of economic development focused on the environment, climate resiliency, and green jobs through investments in renewable energy, housing infrastructure, green public transportation systems, manufacturing, resiliency infrastructure, public waste management and workforce training. It would build upon previously passed city laws and programs, some of which ALIGN previously fought for.

It envisions, for example, spending $7 billion on energy-efficient retrofits at public housing developments and affordable housing buildings, creating more than 42,210 jobs in the process, according to the group’s estimates. Investing $3 billion in climate resilience projects and developing green infrastructure on public land could create another 28,485 jobs, it says, pointing to projects like Northwest Resiliency Park in Hoboken, New Jersey and the Bluebelt Program in Staten Island. The plan also expresses support for the Renewable Rikers proposal, which would replace the Rikers Island jail complex, which is slated for closure, with multi-use renewable infrastructure including energy, waste treatment and agriculture projects.

The jobs it would create would cover about 15% of the city’s currently unemployed workforce, the report estimates, and it would be funded through a combination of state, local and federal funds. As of September, the city’s unemployment rate was 13.9%, down from 16.2% in August but six points higher than the national unemployment rate, according to the comptroller’s office.

“We hear elected officials and candidates talking a lot about addressing income inequality and climate change,” said Maritza Silva-Farrell, executive director of ALIGN, in a phone interview. “And what we're trying to do with this particular report is just to show that when state legislators and city legislators, particularly, are investing in the right things, we actually can get to that goal.”

Silva-Farrell said the plan would build on and complement policies already put into effect by the city and state. In April 2019, the City Council and Mayor Bill de Blasio approved the Climate Mobilization Act, what they called a New York City Green New Deal program, which included emissions caps on large buildings, mandated the installation of green roofs on city buildings, and created incentives for renewable energy projects, among other measures.

At the state level, the Climate Leadership and Community Protection Act was also passed last year, and sets the state on a path to a net-zero-carbon economy by 2050, mandating that 70% of energy needs are fulfilled by renewable sources by 2030 and that the entire electric sector is carbon-emissions free by 2040.

“We do see that there is an opening, an opportunity right now for our economy to shift to a green economy that will actually be a just transition,” Silva-Farrell said, noting that in communities of color, decades of environmental racism have led to worse public health outcomes for residents, exacerbating their vulnerability to the coronavirus and contributing to greater unemployment. According to a New York Times analysis from June, Black and Latino New Yorkers were twice as likely as white New Yorkers to die of COVID-19. About 75% of all frontline workers in the pandemic are people of color, according to data from Comptroller Stringer’s office.

The coalition’s plan depends largely on major capital investments in infrastructure projects, which are widely seen as one of the most effective drivers of economic growth from a recession. But Mayor de Blasio has made significant cuts in the city’s capital plan to reduce city spending amid a massive budget deficit caused by the pandemic’s hit on tax revenue, though some question whether those cuts are prudent given their impact on the city’s annual expense budget is minimal.

The Climate And Community Stimulus Platform would create thousands of union jobs with strong labor and wage protections, it says. Silva-Farrell and the coalition hope that as candidates run for mayor and City Council in the 2021 city election cycle, the plan will help propel the debate about the city’s recovery. “The pandemic is exacerbating the inequalities in our city,” she said. “And if anyone is looking to be elected to be mayor, they must look to address those concerns and think about a jobs plan that addresses those issues, particularly when it comes to climate change and job creation and inequality.”

“When we talk about renewing our economy, we're actually looking at this report as a source for us to uproot not only income inequality within our city,” she added, “but also a shift in the way our economy works. Prioritizing our environment, prioritizing our communities, particularly Black and brown communities.”