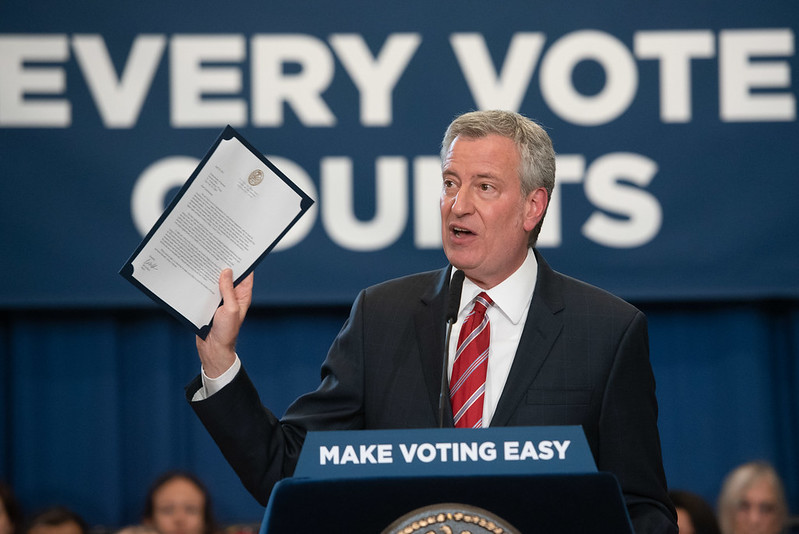 Ayirini Fonseca-Sabune, New York City’s first Chief Democracy Officer, quietly resigned in January and Mayor Bill de Blasio has yet to name a replacement to the position, even amid an especially complicated and consequential election year.

The mayor created the office of DemocracyNYC to be led by the Chief Democracy Officer in 2018, announcing it in his State of the City speech that February. The office was part of a ten-point agenda aimed at improving voter access, promoting youth voter participation, curbing the influence of money in elections, expanding lobbying transparency and making it easier to run for office, among other goals.

“If we're going to fight for fairness and we're going to fight for equality, we better fight to save our democracy,” de Blasio said in his speech. He pointed to several threats including dark money flooding into elections after the Supreme Court’s Citizens United decision, plummeting voter participation, President Donald Trump’s efforts to undermine democratic institutions, and Russia’s attack on the 2016 presidential election. “We are so far from what the norm should be of an active and inclusive democracy,” he said.

In October that year, de Blasio appointed Fonseca-Sabune, a Harvard-educated attorney and civil rights advocate, to lead DemocracyNYC. But after just 14 months on the job,  Fonseca-Sabune stepped down from her position earlier this year – according to the City Record, her resignation was effective on January 1. She now runs her own anti-racism and anti-oppression coaching and organizational development service, according to her website.

Fonseca-Sabune did not respond to a request for comment. Her website features a photo of her with de Blasio at an announcement during her tenure as Chief Democracy Officer and says that in that role she “worked to amplify the voice of every New Yorker, including marginalized communities that have historically been disenfranchised. Her work has included developing robust voter-registration drives, expanding civics education across all ages for the 1.1 million children attending New York City schools, and partnering with community-based organizations, elected officials and agencies at all levels of government, and the philanthropic community to get more New Yorkers civically engaged.”

But since Fonseca-Sabune’s resignation, the mayor has not appointed a new city Chief Democracy Officer. Laura Wood, DemocracyNYC’s senior advisor and general counsel, has seemingly taken over her duties in that time. Wood appeared alongside the mayor at his news briefing on Tuesday to speak of efforts the city is taking to ensure that voting in this year’s general election, with early voting beginning Saturday, goes smoothly.

“As the start of early voting approaches, we want to emphasize that voters don't have to choose between their health and their right to vote,” Wood said. “And the DemocracyNYC team is working hard to make sure that New Yorkers know how to vote safely.” Wood was previously senior advisor and special counsel to the State Attorney General and prior to that, chief Counsel to the State Senate’s Democratic Conference.

When asked for comment, mayoral spokesperson Bill Neidhardt did not explain the reason that Fonseca-Sabune left the administration or why the mayor has not replaced her. He also did not say whether a search for a replacement was underway. “As we presented at today’s press conference, the Democracy NYC team, led by Laura Wood, is performing the critical task of protecting our democracy and the health of all voters and poll workers,” he said in an email on Tuesday.

In a statement on Wednesday, mayoral spokesperson Jose Bayona said, “After Rini’s departure in January, the work at Democracy NYC was kicking into high gear and Laura Wood stepped into the leadership role as the elections expert given the focus our team would be heading this and next year. At this critical time, and with an evolving fiscal crisis, we currently have a strong and committed team to build on the demanding task of protecting our democracy and the health of all voters and poll workers. We thank Rini for her work and wish her the best in her endeavors.”

Rachel Bloom, director of policy at Citizens Union, a government reform group, said the empty position should have been filled as soon as possible, particularly as the city heads into possibly the most consequential presidential election in decades, as well as a major citywide municipal election next year when all of city government will be on the ballot. “There are multiple agencies doing a lot of similar work, between the Civic Engagement Commission and the Campaign Finance Board and DemocracyNYC, and I think it is beneficial to have one person who is leading that as the Chief Democracy Officer,” Bloom said in a phone interview.

Bloom did note that despite the vacancy, DemocracyNYC work has been getting done. As Wood explained at the Tuesday news conference, the office is rolling out several initiatives including a public service announcement campaign with the relatively new city Civic Engagement Commission, created by 2018 ballot referenda, on how to vote early and by mail, a fact sheet developed with the Department of Health on how to vote safely, and a collaboration with Citi Bike for discounted rides on Election Day.

One of the chief reasons the mayor created the DemocracyNYC office was to increase voter registration in the city. “Whoever will take this job will end up being responsible for registering 1.5 million New Yorkers in the next four years,” de Blasio said in that State of the City speech. At the time of Fonseca-Sabune’s appointment, there were 5.13 million registered voters in the city; as of February 21 this year, there were 5.32 million.

The city Board of Elections did recently report processing almost 169,000 new registrations between September 1 and the October 9 registration deadline to vote in this year’s election.

“If that was one of the primary goals of having a Chief Democracy Officer,” Bloom added, “it seems like a really odd moment in time to not have that role filled. And yes, their work continues to be done, but I don't know why the position hasn’t been filled for months and months and months.”