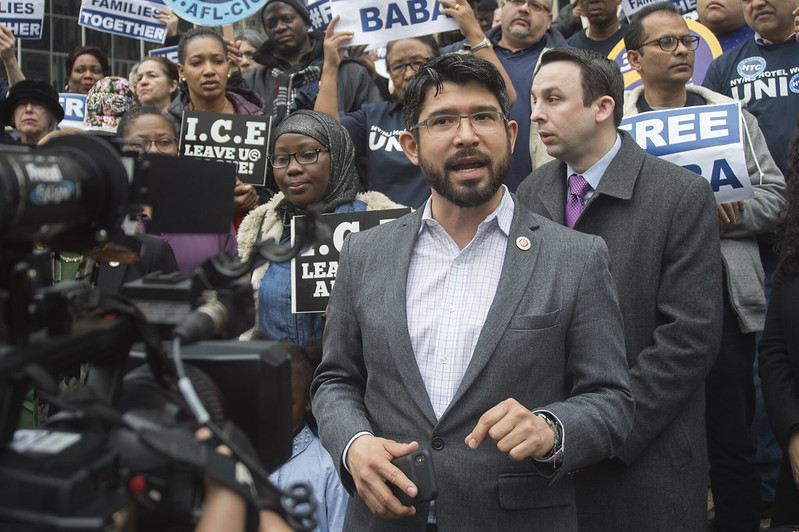 Carlos Menchaca, a City Council member from Brooklyn, is running for mayor, making his announcement official on Thursday morning and entering the growing Democratic primary field. Known for his focus on immigrant communities, the term-limited Menchaca enters the 2021 race while representing neighborhoods including Sunset Park and Red Hook after unseating an incumbent in the 2013 election and holding his seat against several challengers in 2017.

He’s become a steadfast critic of Mayor Bill de Blasio, arguing the mayor has not lived up to his progressive promises and even introducing a resolution to the Council calling for a no-confidence vote in de Blasio, whom Menchaca supported in the past but came to see as a massive disappointment. Menchaca believes he is filling the left-most lane in the still-developing primary race, which will be decided in June of next year and is likely to determine the next mayor of New York City given Democrats’ immense voter enrollment advantage.

He is promising “a new day for New York City,” as he put it in an interview with Gotham Gazette just ahead of his launch, where the mayoral administration is truly engaged with and reflective of communities that have for too long been marginalized.

“I’ve been a constant and consistent voice of the people,” Menchaca said, “and when I think about who’s actually going to win this race on behalf of the people and create a people’s movement, a people’s mayor, a people’s government — that’s me, and that’s my work, and my relationship with community.”

He pointed to policing, climate change, transit, and housing and development as key issues in need of “vision, leadership, compassion, and the progressive policies to effectuate that change” in the face of enormous challenges, both from the COVID-19 crisis but also long-standing crises, such as structures of “white supremacy in our own government.”

Menchaca declined to offer any specific plans or proposals, saying he will be engaging with New Yorkers and letting those conversations drive his platform. He did promise an upcoming focus on reviving the city’s arts and nightlife sectors, which he said are essential to the life of the city and other parts of the economy and must be saved. He also said he’s working to move legislation expanding opportunities for street vendors.

In recent months Menchaca has voted against the city budget deal reached between de Blasio and City Council Speaker Corey Johnson because he argued it did not go far enough in cutting funding from the police department and he torpedoed a proposed rezoning of the Industry City property in his district that would have expanded the campus’ retail and commercial footprint.

Menchaca negotiated with the Industry City developers for some time before telling them they should pull their application. He said he was listening to community opposition amid fears of accelerated gentrification and displacement, a lack of sufficient local benefits that he wanted the de Blasio administration to help provide, and preferences for a community-driven plan focused on green jobs. The developers said he was passing on thousands of local jobs and increased commerce requiring no public subsidies.

In the Council, Menchaca, who is of Mexican descent and grew up in Texas, has chaired the Committee on Immigration for all of his nearly two terms, where he has helped pass the city’s municipal identification law, secure funding for legal representation for immigrants facing deportation, and limit city cooperation with federal immigration enforcement entities. He worked with neighboring Council Member Brad Lander to redesign local zones and admissions policies to desegregate area schools. This year, he co-chaired the Council’s 2020 Census task force. He’s also been known as a transit advocate, particularly focused on better biking infrastructure.

“I’m a bicyclist,” Menchaca said in the interview. “I commute on my bike, I don’t have a driver’s license.”

“The conversations around land use” must be reenvisioned, he argued, including street safety and reform of the city’s land use review process (ULURP), with a shift away from the “rezonings that have been pushed from the previous two mayors [Bloomberg and de Blasio], 20 years of rezonings that have never left communities engaged or empowered or part of the design of how their neighborhood was going to grow, and all that needs to change.”

Industry City “went down to the power of the community and it sent an important message,” Menchaca said, adding that critics of him and others who’ve taken an oppositional stance toward big developers “don’t get it” and should see the shifting winds of New York political power, which is moving to communities.

Menchaca was the first elected official to endorse Cynthia Nixon in her 2018 primary challenge to Governor Andrew Cuomo, and he pointed to progressive victories over Democratic incumbents in the 2018 and 2020 state legislative election cycles, saying, “that’s only going to continue, that’s only going to grow, and that’s the energy that is fueling me and my campaign, and that’s the energy I’m going to reflect back to the city as I build out this campaign and really start engaging people.”

The people who stayed in the city throughout the pandemic are those he will be listening to, he said, including “the immigrant workers, the essential workers,” who “are going to be the ones...to instruct government on how to build the next chapter of the city.”

Calling for public investment in green jobs and public housing, he said of the perspective he’s reflecting, “it’s not no new development, it’s community-based...communities are not against development, we are actually in support of growth, but we want to do it our way.”

Asked about Comptroller Scott Stringer, seen as a frontrunner in the mayoral race, saying some similar things about community-based planning, Menchaca siad, “I have the receipts. That’s it. I’m the one that has actually voted on stuff and has put my name on the line for things that have been hard. I was in the CIty Council, I said no. I said no to a budget. I didn’t just talk about ‘the hardships of this budget,’ I voted no, and I paid a price for that. I also said no on a development project; there are people running right now who have supported things like Hudson Yards.”

Along with that reference to Stringer’s support for the Hudson Yards development when Stringer was Manhattan Borough President, Menchaca also said the comptroller uses “progressive speak” but hasn’t gone “all the way” in action.

“I’m the only progressive, tested elected official in this race,” Menchaca argued in a comparison to Stringer and Brooklyn Borough President Eric Adams, who is more moderate. “There’s a lane that has yet to be entered, a lane that everyone is feeling has yet to be occupied.”

Offered the early indications that former social services nonprofit executive Dianne Morales appears to be running a campaign in or near the left lane, Menchaca said his work and record as an elected official separates him. He promised a campaign “attuned to the movement on the ground” and reflective of “what people have been asking from our leaders. That’s what they asked for in 2013 when they elected de Blasio, and that’s not what they got. That’s what people want. And the city is becoming even more left.”

He said he is already competing for endorsements from elected officials, labor unions, and others, and that while he won’t be announcing any formal support at launch, he expects it to come, and even for some who have already endorsed another candidate to “cross-endorse,” which there is more room for amid the new ranked-choice voting system set to start in 2021 for party primary and special elections for city government positions.

While he has won praise over the years for his work on behalf of those groups and constituencies, Menchaca has also ruffled feathers. Several Democratic City Council members privately call him very difficult to work with; he fired several staff members right before Christmas in 2018; and he was recently accused by leaders of the New York Immigration Coalition of cutting government funding to programming for immigrant communities due to a political dispute.

Early on in his tenure in the Council and de Blasio’s as mayor, with the two sides of City Hall still enjoying a honeymoon period of close comradery, Menchaca pushed back on the administration as it sought to move plans for redeveloping the South Brooklyn Marine Terminal in his district. He caught a lot of flack and was quickly dislodged as a co-chair of the Brooklyn delegation in the City Council.

Reminded of that, Menchaca laughed. “Oh yeah, my colleagues were teaching me a lesson,”  he said. “And now everybody’s on board, everybody’s like ‘oh, de Blasio’s terrible’ - and that was me in 2014!”