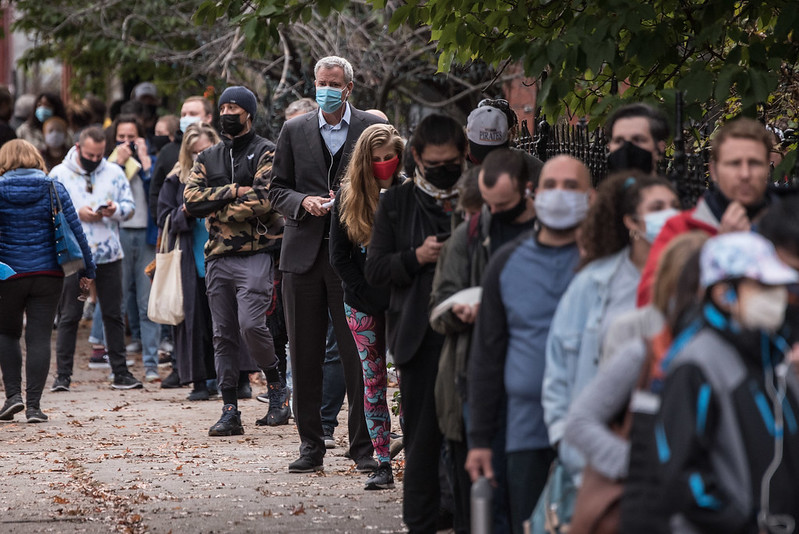 Hours-long lines for early voting in New York City have become the latest fodder for New York’s highest elected officials to renew calls to overhaul the New York City Board of Elections. The general request comes from some government leaders every election cycle but has never been followed with action by those in power and there is little indication that this time will be different.

Governor Andrew Cuomo, Mayor Bill de Blasio, and City Council Speaker Corey Johnson, three of the most well-positioned individuals to alter the structure of the board, each said they supported change this week. Noticeably quiet, however, are key players in the ongoing saga: the leaders of the two houses of the State Legislature, Assembly Speaker Carl Heastie of the Bronx and Senate Majority Leader Andrea Stewart-Cousins of Westchester, both Democrats.

The problems frequently cited by voting rights advocates and at times echoed by de Blasio and others stem from the BOE's explicitly bi-partisan make-up and lack of professional standards, where party leaders control appointments, feuling patronage over competence and efficiency. The result is recurring, almost predictable, dysfunction -- like endless lines, mass voter roll purges, or the printing snafu that led to tens of thousands of Brooklyn residents receiving invalid absentee ballots -- that disenfranchises voters.

"The New York State Constitution literally says that boards of election have to have representation of leadership from the political parties," de Blasio said at a press briefing Wednesday, echoing remarks he made earlier in the week. "I think that's a broken system."

Control over the BOE is decentralized, which helps administrators and elected officials, alike, avoid accountability for poorly-run elections. State law and regulations outline the BOE's general powers and responsibilities, but its commissioners are appointed by the City Council, which defers to slates selected by the Democratic or Republican leaders in each borough. Its funding comes from the New York City budget, which has been used unsuccessfully by the mayor and City Council to attempt to leverage action from the board. The city may pass local laws that impact elections within limits set in Albany.

Through the BOE commissioners, it is the political party leaders that control the actual election administration, down to the hiring of low-level staff.

Changing the BOE's partisan nature requires a state constitutional amendment, but there has been no momentum in the State Legislature and none have been formally proposed by lawmakers. The Legislature passed a number of celebrated voting reforms when it came fully under Democratic control in 2019, though none of them touched the partisan framework of election administration or its lack of professional standards.

Any constitutional amendment would have to pass two consecutive legislative sessions then a statewide voter referendum, which would take years and lots of political capital.

With the start of early voting in the 2020 presidential election, many of the key players criticized the Board of Elections and pointed to the others to fix it.

"I would be open to whatever the city proposes to just redesign from the ground up the New York City Board of Elections. Period," Cuomo said Sunday.

"I think what the governor was referring to earlier was the desire to have the New York City Council pass a home rule request for the state Legislature then to consider," added Beth Garvey, special counsel to the governor.

De Blasio is publicly calling for state legislation to modestly professionalize board operations and a constitutional amendment to address the larger structural problems. The mayor, Cuomo, and Johnson have all indicated support for greater local control, but only de Blasio has explicitly stated he wants a nonpartisan board. Over years, de Blasio has said the Board of Elections should either be a mayoral agency or a nonpartisan, relatively independent city entity akin to the New York City Campaign Finance Board, though he has done little to make any such changes happen.

De Blasio on Wednesday also said state lawmakers should make statutory changes short of an amendment ahead of the 2021 mayoral elections, which will also be some of the first to use the new ranked-choice voting system.

"I call upon the Legislature and the Governor to examine a different kind of model, staying within the concepts laid out in the State Constitution, consider a model that still allows for the representation by political parties as is required, but works with a different kind of board and a different kind of staff," he told reporters, citing the Campaign Finance Board as an example. (A spokesperson for the mayor told Gotham Gazette there were no additional details to the request and that the ball was in the Legislature's court.)

The mayor signaled support for the State Senate bill sponsored by Senator Liz Krueger, a Manhattan Democrat, which would delineate the responsibilities of both BOE commissioners and their executive management. Advocates say the bill would help hold both accountable without a constitutional amendment -- which also means without changing the partisan control.

"The Legislature should immediately pass Senate Bill 2726. That bill would allow for the professionalization of the Board of Elections in its current form," de Blasio said.

"Now I don't think the current form makes sense, but...an immediate action that could be taken would be to pass this legislation to professionalize the board as is currently structured, to empower the executive director to run it as a more modern agency," he added.

Caitlin Giouard, a spokesperson for Cuomo, did not say whether the governor supported the bill. “As the Governor has said he would be open to an entire redesign of the NYC BOE and we will review any legislation to reform it that passes the legislature,” she wrote by email on Wednesday.

“The New York City Board of Elections has a problematic history and it’s time for improvement," Johnson wrote in a statement to Gotham Gazette. "I support Senator Krueger’s BOE reform bill, which takes important steps to fix many of the problems we see at the Board of Elections."

"In the meantime, the Council will be closely monitoring the Nov. 3 election while pushing for structural reform to the Board of Elections including giving New York City more local control,” he said.

Michael Ryan, the BOE's executive director, is the frequent subject of criticism by Johnson and others at oversight hearings held by the City Council and State Legislature, including after the disastrous 2018 midterm elections when Johnson charged Ryan with harming New York City's democracy. Johnson later called for Ryan's ouster but he and the Council have taken no action to reform the BOE since.

State Senator Zellnor Myrie, a first-term Brooklyn Democrat and chair of the Senate elections committee who helped move the various voting reforms through the Legislature last year, raised issues with the Board's make-up but would not comment directly on Krueger’s bill nor whether he supports nonpartisan election administration. Neither Senate Majority Leader Andrea Stewart-Cousins’ office nor Assembly Speaker Heastie’s office responded to inquiries about eliminating partisan control.

"My concerns with the ability of the BOE, as currently constituted, to effectively administer elections have grown throughout the year. From timely processing of absentee ballot requests during the Primary to the massive printing error in Brooklyn last month, I have significant questions about the Board's capabilities," Myrie wrote in an email to Gotham Gazette.

"Once this election is over, my colleagues and I will certainly consider ways to make elections in New York more efficient and voter-friendly," he said.