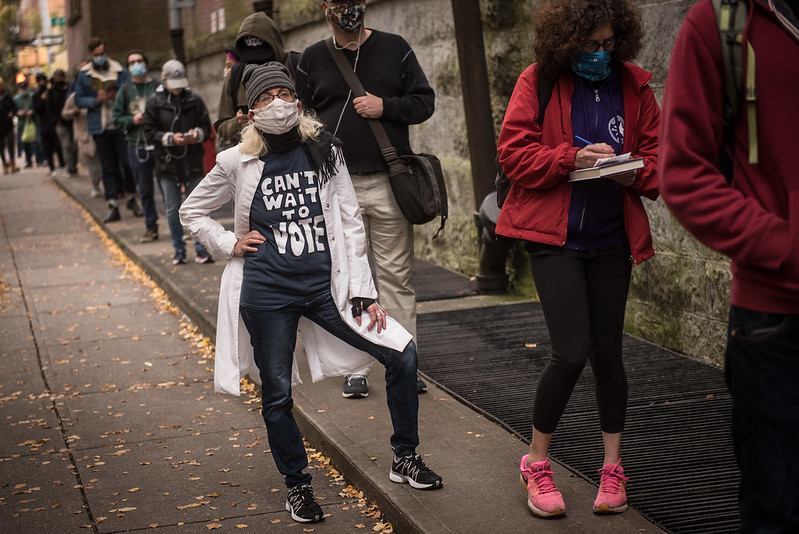 New York City's first early voting period in a presidential general election saw 1.1 million in-person votes cast, hours of waiting across the city, and the threat of a court challenge to expand voting options. Experts and administrators didn't know exactly what to expect because of the unprecedented confluence of the coronavirus pandemic, universal absentee voting, and Trump-era political zeal.

The results point to a number of potential changes that could improve the option in the future, including the major citywide elections in 2021. Highest on the list for voting rights advocates is eliminating assigned early voting sites and expanding the total number of early voting poll sites in each county.

In the two election cycles since early voting was adopted in New York State, the option has always played second fiddle, garnering significantly less turnout than Election Day, including during the June primaries this year. But the nine days this general election has seen a surge of in-person early voting across the state, especially in New York City, and has led to renewed calls to improve the option in the five boroughs.

"Because it was new we didn’t quite know what to expect but always assumed it would be a very popular option once deployed, as it has been around the country," wrote Jarret Berg, co-founder of the advocacy group Vote Early New York, in an email. The system proved to be "indispensable to ensuring voter access during Covid 19 social distancing," he wrote.

By state law passed in 2019, early voting takes place over a nine-day period ahead of Election Day, with one off-day between the last day of that period and the final day of voting. In the 2020 general election in New York City, the turnout rate for early voting was 21% of registered voters, across 88 assigned polling locations. In June, only about 52,000 people voted early citywide following the first-ever expansion of absentee balloting to all eligible voters due to the pandemic. About 2.5 million New Yorkers (about 18% of registered voters) voted early statewide for the general election, which is expected to see a modern record for overall turnout.

Throughout the week, and especially on the weekends, lines of voters extended for blocks at some poll sites leading the New York City Board of Elections to add more hours to the early voting schedule for the last several days of voting. In one Upper East Side district, the BOE even added an alternate site after Assemblymember Rebecca Seawright, a candidate for reelection, announced her intention to sue over what she called "the horrendous treatment of the disabled, senior citizens, and working men and women," who had to wait in line, sometimes in the rain. Before that last-minute additional location was opened, the one early voting site in the area was that with the most voters assigned to it of any in the city, a Campaign Finance Board analysis showed.

There are a number of reasons early voting may have been higher this month than in the small previous sample of electins offering it as an option, beyond the sheer volume of voters for a presidential election. One could be the high visibility of early voting in other states; where standing in long lines, by analogy, became synonymous with both civic duty and Trump resistance in the heavily left-leaning city. Another could be the emphasis on early voting as a more certain and less burdensome alternative to mail-in voting, and as a safer and more speedy (at least in theory) option than traditionally-crowded Election Day poll sites. Voters were also primed to explore alternative voting methods in the general election after having been rapidly introduced to absentee voting on a mass scale this summer, which to some extent broke the dominance of Election Day.

Voting rights advocates say turnout unpredictability like this is exactly why the Board of Elections should offer as many voting options as possible -- while there wound up being 89 early voting poll sites, there are 1,201 poll sites open on Election Day across the city. By extension, flexibility in early voting site choice could at least in part mitigate the impact of high turnout elections. New York City is the only jurisdiction in the state that does not offer universal early voting sites because of carve-outs in state law for counties with certain practical hurdles to implementation. Exemptions were crafted for counties where the complexity of the election system means it would be difficult to prevent double voting across multiple sites or to produce a ballot style for every possible voter (given the number of districts or languages spoken) at every site.

"The rest of the state permits voters to visit any site in their county during early voting, which can help balance out lines in high turnout years, and gives voters the flexibility they were promised when the program was enacted," Berg said.

He added that the New York City Board of Elections has the discretion to create universal early voting on the county (AKA borough) level. To do so on a citywide basis would likely require a change in state law, he said.

Deputy Mayor J. Phillip Thompson said on Election Day at a press briefing with the mayor that the city would be pursuing an agenda that includes universal polling locations, though he did not elaborate on how the administration would secure the Board of Elections-controlled change.

Election observers have pointed to operational fixes that could facilitate better early voting experiences. Having more entry points, check-in tables, and ballot scanners at poll sites could reduce lines outside. In many cases, doing so would require administrators to secure sites with more space -- especially under social distancing restrictions.

One of the surest ways to reduce lines at polling locations is to build out early voting infrastructure. At least three bills in the State Legislature aim to increase the number of early voting poll sites in each county and ensure that they are located based on potential demand. Only one, however, would have a direct impact on New York City's system.

Legislation introduced by State Senator Michael Gianaris, a Queens Democrat and deputy majority leader, would double the number of early voting sites, from one per every 50,000 registered voters in a county to one per every 25,000, and would make that ratio a binding requirement (the law currently allows counties to stop opening locations after they reach seven, regardless of the ratio to voters). The bill, introduced on October 30, during the last weekend of the nine-day early voting period, does not have a companion in the Assembly.

A second bill, which would not have an impact on New York City's current operation, would increase the minimum number of early voting sites per county from seven to ten and, in larger counties, to each town or city. Good government groups say the measure would help ensure local boards of elections are meeting the nonbinding goal of having a site for every 50,000 voters, which is outlined in state law. Advocates have called for that goal to be made a mandate.

State Senator Zellnor Myrie, a Brooklyn Democrat and chair of the Senate elections committee who sponsored the enacted early voting legislation, said the ratio of voters to sites was a concerning problem and advocates have said the assignment process is nontransparent.

"There were clearly too few sites to accommodate the level of interest we saw from voters, and there was also a wide disparity in the number of voters assigned to each site (from just 10,000 to over 100,000)," Myrie wrote in a statement Monday.

According to Berg, the city's program "suffered from an unaccountable site assignment process and the lack of borough or citywide access, both of which should be implemented as soon as possible."

A third bill, which would primarily impact upstate New York and Long Island, would require the largest municipalities in each county to have an early voting site. That bill passed both chambers of the Legislature in July but has not been delivered to the governor, who may request it at any time, for signing.

The League of Women Voters of New York State, which supports the bill, says the state should approach the reform with caution as it could place untenable burdens on some counties.

"While we’re 100% in favor of increasing the number of early voting poll sites, it is not feasible in most counties without financial support from the state," said Jennifer Wilson, the League's deputy director. Fifteen of the 34 counties with only one early voting site in 2019 did not have that site in the largest municipality, according to an analysis provided by the League.

"We’d love to see every county add early voting sites and hours going forward but most counties do not have adequate funds to make that happen," Wilson wrote.

Any changes to early voting could quickly impact the 2021 New York City elections, where all of city government is on the ballot and voters will select a new Mayor, among many other new and some returning office-holders, via June primaries and a fall general election.