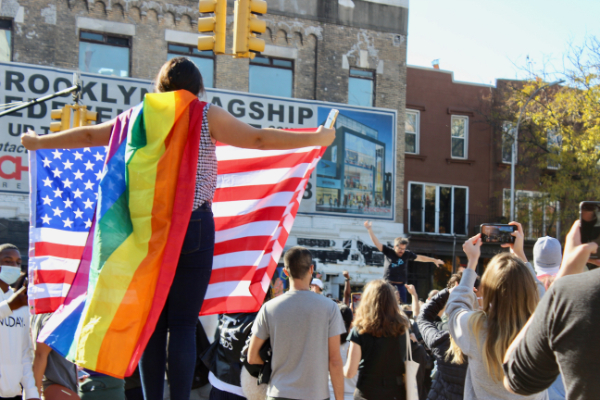 It was a great day for the Doppler effect Saturday in Brooklyn as a near constant stream of car horns trumpeted elation after it became clear Joe Biden had won Pennsylvania and clinched the 2020 presidential election. Throngs of New Yorkers took to the streets, plazas, and parks to breathe a collective, mostly masked, sigh of relief.

In New York, that sigh took the form of spontaneous dancing on sidewalks and in streets, clanging pots and pans, and uncorking champagne -- an outpouring of collective joy perhaps not seen in decades.

Many people heard the news through their apartment windows. Cheers broke out across the city around 11:30 a.m., just after CNN first called the race, and continued all day and into the evening.

In Brooklyn, crowds formed in Barclays Center and Grand Army Plaza, which had become hubs during the spring Black Lives Matter protests for a wide swath of central Brooklyn, not far from the right-leaning enclaves further south. In the case of Barclays Center, where the first night of clashes with police began in New York in the aftermath of the police killing of George Floyd in Minneapolis, the unseasonably warm weather added to the distinctly lighter atmosphere among the people who had gathered there Saturday.

The festivities -- matched by large and small celebrations across other boroughs -- had some of the same symbols of the protest marches, like Black Lives Matter and LGBTQ pride flags, now with the addition of Biden-Harris signs. It was not lost on many who had protested systemic racism and the xenophobic policies of now-defeated President Donald Trump that Harris was to become the country's first Black vice president, as well as first woman and first person of Indian descent to hold the position. Expressions of joy and relief swept many parts of a city that voted for the Democratic ticket overwhelmingly, with hundreds of thousands of ballots still to be counted and expected to widen the in-person margin.

Brooklynites, including U.S. Senator Chuck Schumer, filtered in and out of what became an all-day block party extending after dusk, from Atlantic Avenue onto the fields of Prospect Park. Schumer, the Senate minority leader, joined the crowd at Grand Army Plaza, and, later, held out his cell-phone to capture the Brooklyn jubilation for the president-elect, whom he said was on the other line.

Schumer was among many Democratic New York officials, advocates, and others to celebrate the Biden-Harris win.

In a statement released just after the race was called, Governor Andrew Cuomo said, "This is a historic day. After the darkness, division and hate of the past four years, America has spoken and rejected more of the same. Congratulations to my good friend President-Elect Joe Biden and to Vice President-Elect Kamala Harris. Today we go forward in hope and progress."

In a statement calling Donald Trump’s presidency a “nightmarish chapter of American leadership,” New York Attorney General Letitia James of Brooklyn said that Biden and Harris “have the intelligence, know-how, and aptitude to lead our nation through the triple pandemics of COVID-19, systemic inequities, and an economy that doesn’t work for most working Americans.

During church remarks on Sunday, Mayor Bill de Blasio called the election results symbolic of “the rebirth of our nation,” and went on to call Biden “a healer” and “a moral force.” He said Harris “has done so much already in public life, but will do so much more and has flung open the doors of leadership so finally all can serve, all the talents of this nation can be represented in our White House.”

Assembly Speaker Carl Heastie of the Bronx said in a statement citing Harris as “the first woman and the first woman of color to ever be elected to that office” that the Biden-Harris ticket “offered America a vision of compassion, respect for all people and respect for our democratic institutions.”

Heastie went on to say, “Here in New York we will stand shoulder to shoulder with President-Elect Biden and his team to help move our country forward. New York has always been a progressive leader in our nation, and over the last few years we were able to hold the line, protecting women’s healthcare, making it easier for registered voters to cast their ballot, protecting the rights of LGBTQ New Yorkers, putting college within reach for immigrant students and so much more.”

State Senate Majority Leader Andrea Stewart-Cousins of Westchester, the first woman and woman of color to hold her position, said in a statement, in part, “Both Joe and Kamala are inspirational and historic leaders, and I know they will help our nation heal after the trauma of the past four years. Following an unprecedented election and outrageous behavior from President Donald Trump, now is the time for us all to move forward. The NYS Senate Democratic Majority will work with the Biden/Harris administration to help New York recover from this pandemic and economic crisis. Now is the time to heal the deep divisions in our society and come together as New Yorkers and Americans to build a stronger, more respectful, and more just state and nation.”

“Brooklyn has spoken,” said Borough President Eric Adams, in a statement. “New York has spoken. Our country has spoken. A new day, and new leadership, is coming to America. Thanks to everyone who has turned out in this record-breaking vote. Now we must continue showing up to ensure our leaders deliver the real recovery we deserve. After 244 years, we can finally celebrate a woman being elected to serve in the White House — and a person of color as VP. Congratulations to Vice President-elect Kamala Harris, who alongside President-elect Joe Biden will be the most diverse duo to ever lead our nation.”

City Council Member Ritchie Torres of the Bronx, who is heading to Congress after his election this year, said in an emailed letter to supporters that “For four years, we watched the character, corruption, and chaos of one man shape our national identity. We watched as Donald Trump violated our principles, eroded our institutions, and made a mockery of the rule of law. We watched as he pursued cruel and disastrous policies directed at marginalized communities, and as he systematically dismantled the progressive agenda.”

“During Donald Trump’s presidency, we all witnessed the resurgence of white nationalism — and the elevation of fringe right-wing elements to positions of immense power and influence,” Torres continued. “We watched as Black and Brown communities suffered at the hands of over-policing, and as calls for accountability and reform were ignored by the Trump administration. We watched Donald Trump lie about and then ignore the most significant public health crisis our country has seen in the last century — a pandemic that has resulted in over 9 million cases and claimed the lives of more than 237,000 Americans and counting.”

“The horror that we witnessed is difficult to put in perspective, but what’s clear is that it required a transformational movement capable of defeating the evils of this era and turning the page,” Torres wrote. “And that’s exactly what everyday people in this country set out to build.”

“This is only the beginning,” Torres went on to conclude. “The damage of the last four years doesn’t go away simply because we elected a new president. Joe Biden needs our help to enact an agenda that lifts people out of poverty, addresses systemic racism and inequities, gets this pandemic under control, and so much more. I can’t wait to get to Washington to work with fellow House Democrats and President Joe Biden to get the job done. And it’s an honor to know that you’ll be by our side every step of the way.”

In response to the Biden-Harris win, leading New York immigrant advocates Murad Awawdeh and Rovika Rajkishun, the interim co-executive directors of NYIC Action, the political arm of the New York Immigration Coalition, said, “This year, immigration was on the ballot—and it won a resounding victory.”

They said that “millions of Americans firmly repudiated Trump’s anti-immigrant agenda at the polls with the record-breaking turnout from immigrants and people of color and a show of force not seen in previous elections. Here in New York, NYIC Action mobilized thousands of immigrant citizen New Yorkers—many of them first-time voters—to vote for Vice President Biden, Senator Harris, and other Democratic Congressional and State candidates because they believe immigration is good for New York and good for America. The fact is that these victorious candidates have committed to undoing the damage that the Trump administration has inflicted on our communities and are the only viable option for an America that is united in fighting this pandemic and building an economy that works for all of us.”

“Now, as we get ready for the votes to be confirmed and to swear in a Democratic administration, we remind Vice President Biden and Senator Harris of their promises:,” they continued, “to rescind the Muslim Ban, reinstate and expand DACA and TPS programs, as just a starting point to rebuilding our immigration system from the ground up.”