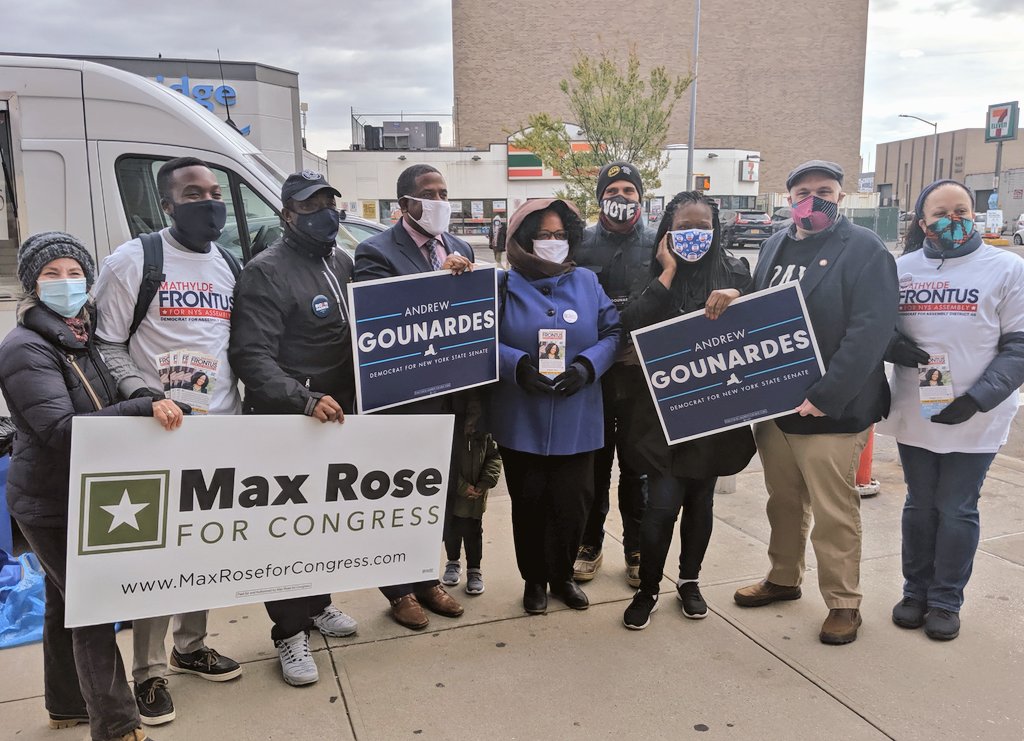 As New York election officials begin counting absentee ballots from the general election, there are dozens of races that have yet to be decided. Based on the in-person tallies, Democrats in several state and congressional races are currently running behind Republicans and are hoping that absentees will deliver them victories. But in three races in overlapping districts in Southern Brooklyn and Staten Island, areas home to more Republican voters than most other parts of the heavily Democratic city, absentees may not be enough to overcome leads buoyed by immense turnout for the GOP candidates for Congress, State Senate, and Assembly.

In New York’s 11th Congressional District, 22nd State Senate District, and 46th Assembly District, Republicans stand a chance of reclaiming Democrat-held seats after turnout swelled this year, likely in large part because President Donald Trump was on top of the ticket. Each district is home to large pockets of Republican-leaning voters, anomalies in a city where Democrats outnumber Republicans eight to one and Joe Biden received three-quarters of the in-person vote. Trump’s job performance, New York State coronavirus restrictions, criminal justice reform and public safety, and how far left New York City progressives want to take city government were all key themes in the three races.

In the 11th Congressional District, which covers the entirety of Staten Island and parts of Southern Brooklyn, first-term Democratic U.S. Rep. Max Rose trails Republican Assemblymember Nicole Malliotakis by a margin of 37,158 votes going into the absentee counting, which begins Tuesday for some districts. Though Malliotakis declared victory on election night due to her more than 15-point margin based on the in-person vote, Rose has refused to concede the race. According to New York City Board of Election data, he received 99,224 votes (42.04%) to Malliotakis’ 136,382 (57.79%).

Rose is all but assured to lose his seat, which has mostly been in Republican hands for many years. With more mailed votes still being accepted for several days to come, the latest Board of Elections numbers show there were 48,259 absentee ballots returned in the district as of Election Day – 27,598 came from Democrats, 9,213 from Republicans, and 9,508 from party-unaffiliated voters. As absentee ballots continued to come in, the Democratic share was expected to remain high, favoring Rose.

Rose also appeared on the Independence Party ballot line and 1,212 voters from the party cast absentee ballots. Malliotakis appeared on the Conservative Party line, whose voters cast 401 absentees. If Rose won all those Democrat, Independence, and unaffiliated voters, which is very unlikely, it would give him 38,318 votes, for a total just past what Malliotakis got in the in-person vote. Meanwhile, Malliotakis will easily pick up the bulk of the 9,900 Republican and Conservative absentee voter votes, not to mention some percentage of the unaffiliated voters. (Some voters will likely leave the race blank, a not-uncommon practice down ballot during presidential elections.)

Of the 48,259 absentee ballots returned as of the Election Day tally, Rose would need to win at least 88.5% of them to surpass Malliotakis, though more valid absentee votes surely came in since Election Day.

Gounardes doesn’t face an insurmountable lead. Through Election Day, 18,524 absentee ballots were returned in the district; 11,622 were from Democrats, 2,651 from Republicans, and 3,714 from party-unaffiliated voters, according to the Board of Elections. Bruno also appeared on the Conservative and Independence Party lines, whose voters returned 101 and 345 absentee ballots respectively.

Taking the 6,035-vote margin and the 18,524 absentee votes into account, even though the latter figure has certainly grown, Gounardes would need to win 66.3% of the absentees to surpass Bruno. That percentage is not far off the percentage of absentee ballots tallied by election night that were from Democratic voters alone.

Assemblymember Mathylde Frontus from Brooklyn’s District 46 also represents some of the same neighborhoods as Gounardes and Rose. She received 15,030 votes (45.66%) via in-person voting. Her little-known opponent, Mark Szuszkiewicz, received 17,852 votes (54.23%), giving him a 2,822 vote lead heading into the absentee count.

Frontus could overcome that lead with absentee ballots largely in favor of Democrats. Of the 7,081 absentee ballots returned in the district, 4,525 were Democratic voters, 1,035 were Republicans, and 1,273 were unaffiliated voters.