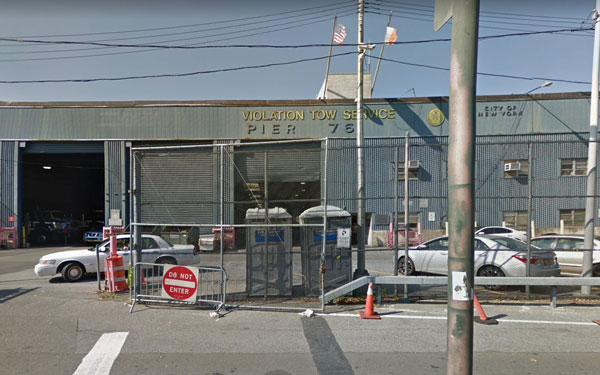 As a state-imposed deadline approaches for relocating a massive NYPD tow pound at Pier 76 in Manhattan, Mayor Bill de Blasio’s administration has requested the state waive fines that would be imposed if it fails to complete the task while the city continues to look at alternate sites for towing operations in the borough. The city may even have found a target Manhattan site owned by the state.

In the state budget this year, Governor Andrew Cuomo pushed through a provision that requires the NYPD to vacate its 250,000-square-foot tow pound at Pier 76 in Hell’s Kitchen and hand it over to the Hudson River Park Trust for redevelopment. The move has been in the works for more than two decades, having been first included in the Hudson River Park Act of 1998. The state gave the de Blasio administration a tough ultimatum. By the law passed in early April, if the city fails to move the tow pound by December 31, it will have to pay the Hudson River Park Trust a fine of $12 million, with an additional $3 million every month it occupies the space after February 1, 2021.

Mayor de Blasio and NYPD officials opposed the move, citing the city’s lengthy land use process. At a City Council hearing in late January, then-NYPD Chief of Transportation William Morris criticized the “unrealistic deadline” imposed by the state, noting that it would take far longer to find a suitable alternative in Manhattan. Last year alone, he said, the department towed 50,000 vehicles to the pound, a volume that can’t easily be handled by other locations.

“It literally would cause us to violate city law that requires a land use process for any such action to take place and that process by law takes more than a year to begin with,” de Blasio said of the proposal when testifying before the joint fiscal committees of the State Legislature in February. “This tow pound is basically the size of Union Square Park. Finding an alternative in and near Manhattan is a very complex undertaking.”

The city is now seeking a two-year waiver of those fines and fees and has offered to purchase or lease a State Department of Transportation parking lot at 621 West 45th Street that can accommodate the tow pound’s capacity. Deputy Mayor Vicki Been made the request in a letter dated October 29, sent to Erik Kulleseid, commissioner of the State Office of Parks, Recreation and Historic Preservation and to Basil Seggos, commissioner of the Department of Environmental Conservation and chair of the Hudson river Park Trust.

In the letter, as the mayor himself has noted previously, Been said the city can ill-afford millions of dollars in fines as it struggles to bring its budget under control because of the devastation caused by the coronavirus pandemic. “Already the City has had to make severe cuts to vital programs affecting NYC residents, the maintenance and improvement of other parks and critical infrastructure in the city, and the funding of nonprofits and the services they provide,” the letter reads. “Implementing a fine against the City would further shift resources away from such core programs at a time when they are most needed.”

A spokesperson for the state Department of Environmental Conservation declined to comment on the city’s request but provided an earlier September 17 letter sent by Seggos to Mayor de Blasio. In the letter, Seggos said he would ask the Hudson River Park Trust to open the pier as it could provide “extraordinary benefit” as a public space. But the letter also seemed intended as leverage against the administration.

“I’m sure we all agree at this time of economic pressure that it would be wholly unacceptable to the public to lose the benefit of the pier and to burden the City’s already stressed budget through noncompliance with state law at a time when the City is considering laying off personnel,” Seggos wrote. “Any site can be used as an NYPD parking lot, but only the pier can provide spectacular open space for the public.”

Despite the concerns about the fiscal cost that the city would have to bear, prominent elected officials also continue to push for the move of the tow pound. A spokesperson for City Council Speaker Corey Johnson, who represents the area, said he “supports moving the tow pound and creating more open public space in the area. He will continue working with the city and the state to make this happen as soon as possible." 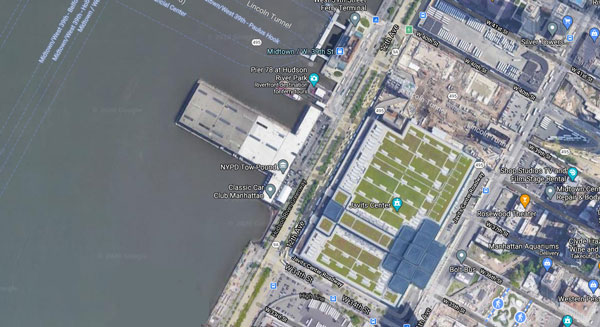 State Senator Brad Hoylman, whose district includes the tow pound, also wants the city to meet the deadline. “The City has had over two decades to move the NYPD tow pound from Pier 76. New Yorkers deserve to have this pier in the Hudson River Park available for open space rather than used as a rent-free dumping ground for cars by the NYPD,” he said in a statement to Gotham Gazette. “I can’t speak to whether the Governor’s office is open to negotiating more time with the City, but I’d urge the City not to delay any further and find appropriate City- and NYPD-managed locations for the tow pound. We want a park, not a parking lot.”

The city’s ideal proposed site is currently used for tour bus parking and a pedestrian bridge for the Intrepid Museum. The administration has said it will be willing to pay the fair market value for it. Over the years, the city has also reduced the footprint of the tow pound, requiring less space than in the past. Horse stables for a mounted NYPD unit were moved from the site in 2015 and  the city is now in the middle of lease negotiations to move another 18,000-square-foot service shop from the premises, according to Been’s letter.

The city also identified Marshalling Yards, owned by the New York Convention Center Development Corporation, as an alternate site. According to Been’s letter, the Yards, between West 33rd and 34th Streets, will be redundant after the Javits Center expansion is completed in 2021, allowing the tow pound to be moved there.

Although the administration is considering two private properties as well, Been’s letter notes that “given the complexity of tow pound operations and procurement processes, conversations with private landlords often stall or move slowly.”

As the letter notes, the siting decisions were supported with a Capital Project Scope Development (CPSD) study, conducted by the firm Dattner Architects at a cost of $1 million. The study also examined whether booting illegally parked cars could be an alternative that would reduce the NYPD’s reliance on towing. The administration, however, concluded that it would be “frequently counterproductive” to do so. “Booting would significantly worsen the situation that the City is trying to address. Particularly in Manhattan, this creates an unsafe situation, as cars, pedestrians and bikers will be required to  maneuver in and out of traffic,” the letter reads.