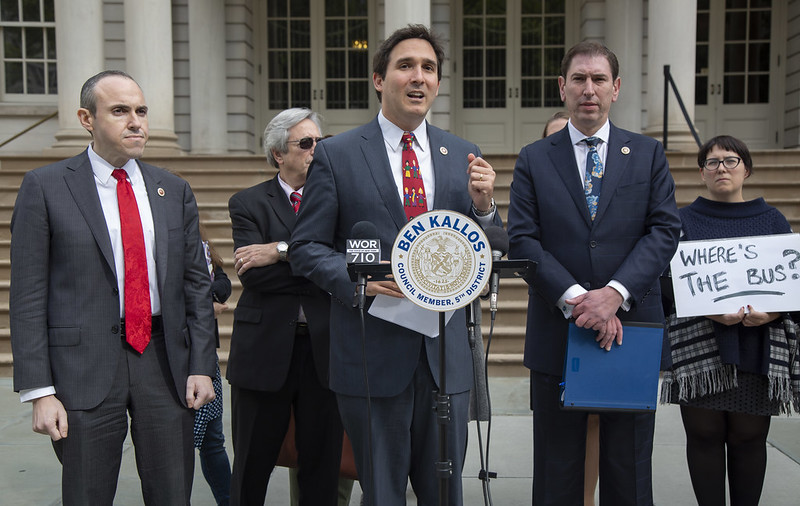 As the city heads into the 2021 municipal elections that are already drawing hundreds of candidates and will see many millions of dollars in campaign spending, a City Council member wants to preempt violations of the law on independent expenditures by increasing penalties.

Council Member Ben Kallos, a Democrat from the Upper East Side who is running for Manhattan borough president in the 2021 election cycle where all of city government is on the ballot, will introduce two bills on Thursday to penalize candidates who coordinate with independent expenditure campaigns by reducing the candidates’ spending limits and by directly fining independent spenders who try to circumvent the rules.

Under Kallos’ proposals, there would be new, more closely defined forms of coordination between a candidate campaign and an independent spender, and fines for violations extended to agents of an independent expenditure campaign.

“We have an amazing new campaign finance system that is encouraging hundreds of candidates to eschew donations from pay-to-play moneyed interests, including the real estate industry, and as we saw in 2013, independent expenditures can have a huge impact,” Kallos said in a phone interview, with reference back to the last city election cycle ushering in so much turnover.

In the 2013 election, most local, boroughwide, and citywide elected officials were term-limited out of office just as they will be next year. That cycle saw $15.9 million in spending by independent entities, including $8 million on the mayor’s race alone.

“Outside spending is not new to city elections, but the scope was astonishing,” the New York City Campaign Finance Board wrote in its 2013 post-election report, recommending that the City Council pass laws requiring greater disclosure of those independent expenditures, which by law are not allowed to coordinate with candidate campaigns but are also unlimited in their own spending on behalf of or against candidates, the result of the U.S. Supreme Court’s 2010 Citizens United ruling.

After the 2013 election, the CFB fined a campaign consulting firm, the Advance Group, and newly-elected Council Members Laurie Cumbo and Mark Levine, a total of $31,000 for coordinating spending between their campaigns and an outside group, NYClass, that was advocating for a ban on horse carriages in Central Park. (Levine is also running for Manhattan borough president in the 2021 Democratic primary.)

Since that election, the City Council has approved a variety of changes to the city’s campaign finance program, including new regulations on independent expenditures and, as Kallos noted, the system was also strengthened through a ballot referendum to lower individual campaign contribution limits and provide more public matching funds to candidates. “I want to make sure that if there's independent expenditures, which there likely will be, that they have to follow every single rule on the books and that candidates can't get away with cheating to get elected,” said Kallos, who has been the sponsor of several campaign finance reforms over the years.

The city only has so much control over independent expenditures, which have been considered a form of free speech under the Citizens United decision. The ruling opened the floodgates to large, anonymous spending in elections and has been a bane for election reformers since it removed any limits on outside spending. City law requires that any entity or individual that spends more than $1,000 to support or oppose a candidate or ballot proposal must disclose the amount and top sources of its funding.

“I want candidates to see this and know it's coming, and know that it's the law to begin with but we're tightening things down to make [coordination] harder to achieve,” he added.

Kallos’ other bill was born directly out of a recommendation by the CFB in its 2017 post-election report to extend liability provisions in the law to agents of independent spenders – currently fines of up to $10,000 can apply to entities themselves, campaigns and agents of candidates running for office. Kallos’ proposal would slap up to a $10,000 fine for every instance that one of those independent expenditure agents violates the rules.

“I have no sympathy for a candidate who thought they were gonna cheat their way into elected office and won't be able to because of this law,” Kallos said. In order for the bills to become law they will have to pass City Council committee, where they would first be the subject of a public hearing, then the full Council, and be signed or allowed to age into law by the mayor.