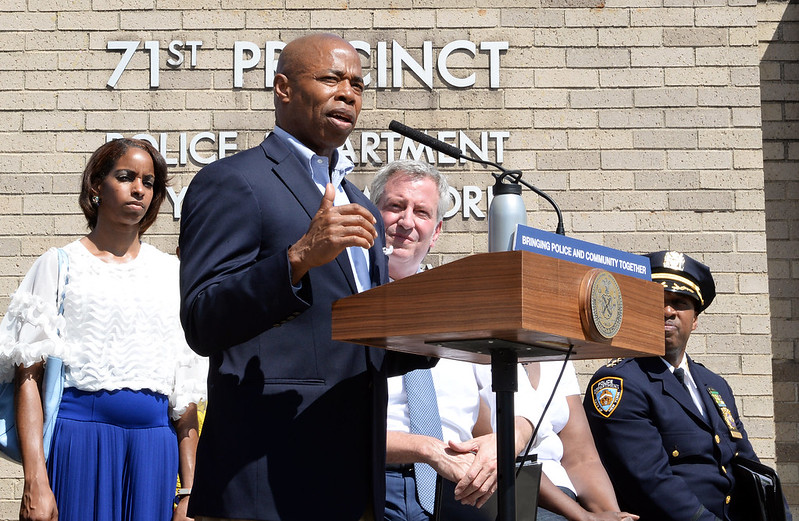 After years of laying the groundwork, Eric Adams, a Democrat serving his second and final term as Brooklyn Borough President, on Wednesday officially launched his campaign to run for mayor of New York City in the 2021 election.

Adams is the latest entrant in a crowded and growing Democratic primary but has a fundraising advantage, prominent allies, a solid political base, and a record of public service that make him an apparent frontrunner in the race.

“People talk about the tale of two cities but we need to acknowledge that the dysfunctionality of government is the author of that book,” Adams said in a Zoom news conference at noon joined by fellow elected officials and dozens of supporters, referencing Mayor Bill de Blasio’s 2013 campaign slogan focused on inequality. “We need action and we need it now. The city is in serious trouble. We have already been through a lot and the future we face is full of monumental challenges. Now is the time to turn our pain into purpose together.”

Elected officials who endorsed Adams in the news conference included City Council Members Laurie Cumbo and I. Daneek Miller, Council Member-elect Darma Diaz, and former U.S. Rep. Ed Towns. Miller commended Adams’ “effective and unapologetic leadership” in the State Senate and as borough president. Cumbo praised him for his tireless efforts during the coronavirus pandemic, his record of advocating for police reform and for standing up for women’s issues.

“Over my 40 years in government service, I have become acutely aware of the qualities needed to provide essential leadership...Eric has demonstrated that he has all the tools to do the job,” said Towns.

In a phone interview prior to his announcement, the borough president laid out his vision for creating a more efficient city government that can ameliorate inequalities in health and education while restoring public safety and achieving police reform.

Adams said he is running to be the first “blue collar mayor” of New York City, citing the challenges of growing up as a Black man in Brooklyn and Queens, and the medical issues he has overcome as an adult that have made him an evangelist for healthy living. “Right now, our city is in a dark place, from homelessness to crime to COVID-19 to economic issues,” he said. “So it's really about having a mayor that has gone through a lot that would help people who are going through a lot right now.”

Adams has a strong fundraising start in the race. With more than $2.2 million in campaign cash, he has raised more than any other candidate except Stringer, and will likely receive millions more in public matching funds from the Campaign Finance Board.

While Adams doesn’t fit into a neat ideological mold -- he said he will run a campaign that appeals not only to working New Yorkers but to those who employ them -- he is running as more of a moderate than some others in the field running further to the left. He argued that his appeal as a “pragmatic progressive” extends throughout the city’s many diverse communities and beyond Brooklyn, pointing to his broad base of donors as evidence. He said he’s received support from Carribean Americans, African Americans, Chinese Americans, the Sephardic and Hasidic Jewish communities, and more. “I’m the United Nations candidate,” he mused. He also said his supporters are economically diverse, including “cab drivers, teachers, law enforcement, correctional officers, developers” among them. “The diversity of my economics, my ethnicities, and my zip codes is extremely impressive,” he said.

Adams has eschewed any voluntary limits on his fundraising like declining donations from big real estate players, which has become something of a left-wing litmus test, saying he wants to be a mayor for everyone and that the city needs real estate interests at the table.

For Adams, his years in the NYPD, where he was part of a move toward more data-driven accountability, significantly influences his approach to governing. He has repeatedly spoken of bringing a “real-time mechanism” for managing city issues modelled on the NYPD’s CompStat system, which tracks crime data on a daily basis. “What I will be talking about throughout the campaign is that our city’s dysfunctional,” he said. “Inefficiencies are leading to inequalities that are causing the injustices that we are witnessing...My years of policing have revealed the destruction of how we're running our city and how we can turn it around.”

He said he would prioritize three major issues – public safety, economic recovery and, most importantly, education. “I want to be viewed as that mayor that has finally turned around our disjointed education system,” he said, insisting that education inequity “feeds the overwhelming number of crises” the city faces from homelessness to healthcare access to disproportionate criminal justice outcomes.

As a former police officer, Adams walks a fine line on an issue that is likely to be central to the mayor’s race. The protests earlier this year against systemic racism in policing after the killings of George Floyd and Breonna Taylor have reinvigorated the Black Lives Matter movement for police reform and addressing other systemic inequities and racism, and activists who pushed to “defund the NYPD” in the city budget this year have promised to continue their advocacy in 2021.

As someone who sought to confront police brutality and racism from within the department, Adams has been wary of embracing a narrative that could paint all police officers as villains. “Far too many people are attempting to address an important issue, which is public safety, through slogans and bumper stickers,” he said. “That is not how you deal with public safety.”

He did promise reforms such as changing the department’s demographics, increasing the number of officers who live in the city, streamlining policing through technology and committed to a “zero tolerance” policy for officer misconduct. “My goal as the mayor is to show how we can change the ecosystem of public safety. So it's not about ‘defund,’ it's about properly allocating the funds to be more proactive and not reactive as we currently are.”