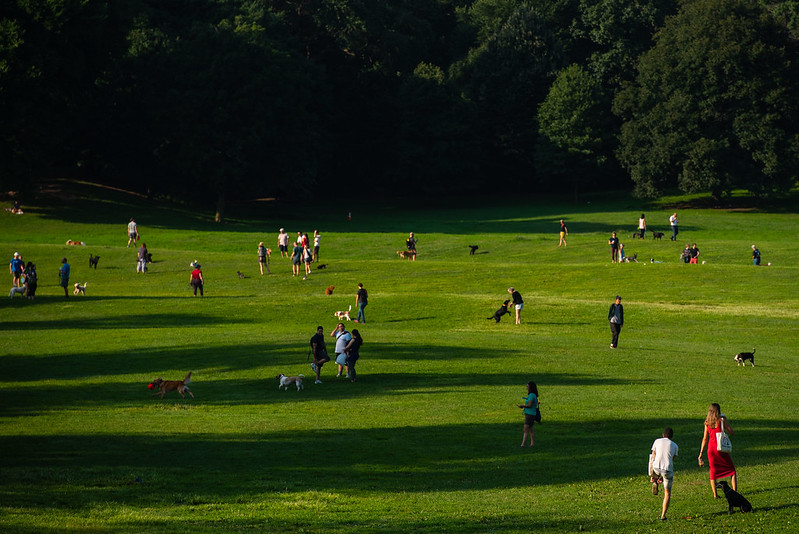 In New York City, virtually every square foot of open space is highly contested, considered, or counted on. Because of COVID-19 restrictions, open spaces have become more important than ever. Yet while open space initiatives such as outdoor dining and car-less streets were widely praised during the summer months and into the fall, questions have persisted about how people will adapt during the winter and what the long-term plans are for the utilization of open space in New York.

Importantly, questions have also been raised around how successful the city’s limited open space programs have been in marginalized communities. These were some of the issues and questions tackled in a recent series of expert discussions held virtually by the Municipal Arts Society of New York (MAS), a nonprofit group. Each panel focused on a different issue related to “the future of open space,” including green space, the public realm, small businesses, and transit, with thoughts from scientists, politicians, advocacy group leaders, and others.

Guests joined from all over the country, including Baltimore and Los Angeles, providing important perspectives from outside the bubble of the five boroughs. Susan Chin, the principal of an independent design consultancy, Design Connects, moderated all four conversations.

MAS President Elizabeth Goldstein set the guidestar for the series, asking of the city’s initial covid-era open space programs: “With so much uncertainty still ahead, what are the long-term implications of these learning experiments, and how have the structural inequities predating COVID been exacerbated by this crisis?”

“The Future of Open Space for People” focused on the ways in which COVID-19 has shaped how we see the public realm, especially how we have reimagined open space to replace our indoor lives. What does open space mean for us during a pandemic? Participants in the discussion generally said they see this as an opportunity to correct historical wrongs in marginalized communities.

Goold said that the pandemic allowed for us “to reconsider our relationship to the built environment,” especially after so many small businesses have been hurt. This is why Goold and her partners have been working through the Baltimore Development Corporation to invest grant funds in local retail business districts while creating infrastructure that works with social distancing.

Chabeshi agreed and explained how his initiative focused on designing streets that tailored to the community’s needs, which led to the development and reconstruction of 70-plus L.A. streets.

While the panelists saw opportunity, they also noted some significant barriers. Liff stressed that money was scarce when it came to creating green infrastructure since that sort of construction required digging into the street and entirely redesigning it.

When asked what they thought about the claim that cities were ‘dead,’ the panelists shook their heads. Goold spoke about how open spaces allowed for the people of Baltimore to voice their concerns about social issues by protesting and demonstrating, while Liff cited outside dining and open streets as key forces that kept New York City alive amid the pandemic.

“The Future of Open Space for Small Business” discussion revolved around the long-term effects of COVID-19 on businesses in New York City. Panelists addressed questions about the long-term implications of outdoor dining and future plans for dealing with cold weather for businesses trying to offer more outdoors. A significant portion of the discussion centered on ensuring accessibility and equity in these new open spaces.

Kaufman-Gutierrez stressed the notion that New York City street vendors have been wrongly excluded from COVID-19 relief efforts. She argued that vendors be allowed to participate in open street business opportunities like any brick and mortar store. Anything less than that, she argued, was simply unfair.

Kaufman-Gutierrez said that the city should extend the “fix it, don't fine it” approach to street vendors, not just brick and mortar businesses. “No one wants a fine, especially not after suffering months and months without relief,” she said. She also suggested that vendors set up in street fair models where they could easily attain temporary permits.

“The Future of Open Green Space” focused on the importance of accessibility to parks in cities. Panelists included Dr. Michelle Kondo, a research social scientist for the USDA forest service; Benita Hussain, Director of the 10 Minute Walk Campaign at The Trust for Public Land; and Terry Carta, Executive Director of the Brooklyn Greenway Initiative, which she marketed as “linear park meets transportation corridor.”

While greenways offer much needed open space for bikers and pedestrians, they aren’t all connected. Communities without green spaces report more problems relating to mental health. If greenways were connected so that every community could gain access, this could even curtail gun violence, according to Dr. Kondo.

Hussain mentioned that mayors across the country count the parks in their community as “integral to their growth plan” since they make neighborhoods livable and attractive to families. She also pointed out that the mental health benefits associated with parks and other open spaces are compelling.

“The Future of Open Space for Active Transit” focused on transportation initiatives in New York City, questioning how a newfound reliance on open space might offer important insights that could improve the current transportation system as well as equitable access to roadways, bike lanes, and parks.

Luten spoke about the challenges of educating people about the importance of cycling in the city and the need for relentless advocacy. Williams argued there is little to no separation between racial lines and transit lines: “the problem is not that people don’t want to ride bikes, it’s about access,” she said. She also said bike lanes mainly exist in white, affluent neighborhoods, and that equity should be the leading consideration in prioritizing infrastructure and opportunity. Williams said the pandemic exposed structural inequities that predated COVID-19 and that the need for bike infrastructure has become far more apparent as New Yorkers seek safe, outdoor ways to get around.

Harris pushed back on a question about looking to other cities like Amsterdam for guidance: “It’s not innovative, these ideas have been working," he said of key pillars of expanding access and infrastructure for pedestrians and bike-riders. "We need the leadership to help build and scale these ideas.” Schwartz mentioned Barcelona as a model for design aimed at encouraging people to walk and bike more. He also said that in addition to new designs and ideas, a key to post-covid transit success is simple: better traffic enforcement.

The concept of teaching people from a young age about the importance of safe biking and the navigation of trailways was a common theme. Luten noted that in the Netherlands, bike education starts at a very young age. Indeed, she was required to attain a bike certificate in primary school. But, Williams said, unfortunately no matter how much you educate people in New York City, nothing can adequately protect them from the inadequate biking infrastructure, especially in poor neighborhoods. She did note that bike lane infrastructure is at times a more complicated endeavor in poorer neighborhoods because residents believe that they represent the first steps of gentrification.