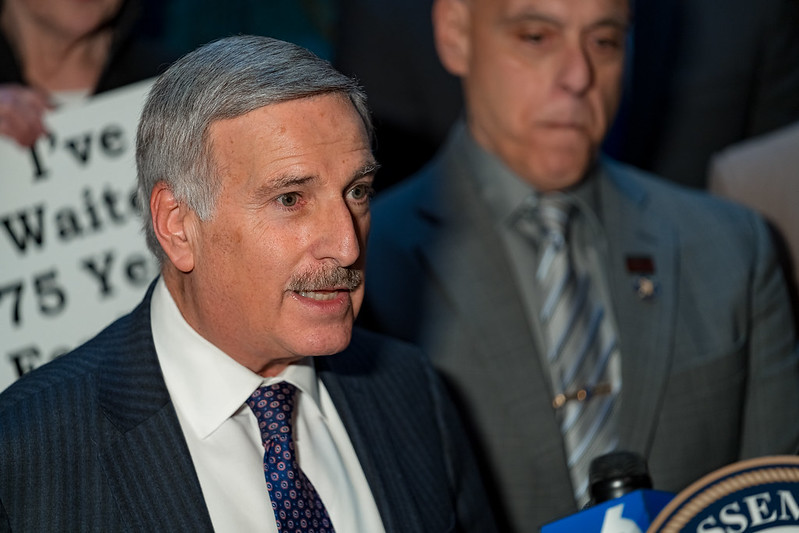 State Assemblymember David Weprin, a five-term Queens Democrat, officially launched his 2021 campaign for New York City Comptroller on Monday. He is running to replace term-limited Comptroller Scott Stringer, and is competing with three other sitting elected officials to become the city’s next chief fiscal officer in the Democratic primary set for June.

“I'm the only one of all the candidates that has both private and public sector finance experience, something that's going to be very needed as we're in the middle of the worst fiscal crisis in the history of the city of New York in probably over 100 years,” Weprin said in a phone interview on Monday.

The next New York City Comptroller is likely to have an especially challenging job given the coronavirus pandemic has created major budget deficits and record-high unemployment across various sectors of the economy. Whomever takes office at the start of 2022 will be tasked with helping to responsibly guide the city toward economic and fiscal recovery while holding a new mayoral administration accountable.

Weprin’s opponents in the 2021 comptroller race include Manhattan State Senator Brian Benjamin, Brooklyn State Senator Kevin Parker, and Brooklyn City Council Member Brad Lander. The primary will see the first citywide use of ranked-choice voting and is all but certain to determine the eventual winner of the seat because of the city’s heavy Democratic voter enrollment advantage. There are no Republican candidates at this time.

Weprin represents Assembly District 24, which includes the neighborhoods of Richmond Hill, Briarwood, Jamaica HIlls, Jamaica Estates, Holliswood, Hollis Hills, Oakland Gardens, and Glen Oaks. He was elected to the seat in a special election in 2010. His roots run deep in the district, which was previously represented by his brother, Mark Weprin. Prior to that, it was held by their father, Saul Weprin, the former speaker of the state Assembly. From 2002 to 2009, David Weprin represented the area in the City Council and chaired the influential Committee on Finance. Mark Weprin won the seat after David Weprin went to the Assembly.

In the interview, David Weprin emphasized his experience with municipal finances, citing his eight years balancing city budgets as the Council’s finance chair. Prior to that he had been appointed Deputy Superintendent of Banks and Secretary of the Banking Board for New York State by former Governor Mario Cuomo, overseeing a $2 trillion industry and regulation of more than 3,000 financial institutions and firms. At the time, Weprin had worked in the private sector for various major financial firms. He also served as Chairman of the Securities Industry Association for the New York District for three years.

Though the comptroller cannot make direct decisions about spending and revenue, the position provides a prominent soapbox to influence such decisions and broader policy-making. Like some before him, Stringer has used the office to issue plans and proposals on everything from universal childcare and affordable housing to solving the debt crisis in Puerto Rico. “You still have a bully pulpit,” said Weprin, who unsuccessfully ran for city comptroller in 2009 (he also lost a race for the U.S. House of Representatives in 2011).

Weprin laid out a few top priorities including auditing the MTA, the New York City Housing Authority, and the Department of Education to eliminate wasteful spending. He said he would seek to use the city pension portfolio to invest in affordable housing construction. And he promised to create a Red-Tape Reduction Commission to help eliminate fees and fines for small businesses and ease regulations; and a New American, Diversity & Inclusion Task Force to expand access to capital and financial services for immigrants in underserved communities.

“There's obviously a lot of problems,” he said. “I can make a contribution to working together with others to solve the problems.”

Though the city’s fiscal picture next year will depend on the level of federal aid it receives in any next stimulus package, Weprin said that filling massive gaps in the budget would require a broader approach. “I think there should be different pieces to the puzzle,” he said.

He said Mayor Bill de Blasio’s proposal to borrow funds long-term for current operational expenses should be “the last resort” but he wouldn’t rule it out. “Everything's gonna be necessary,” he said.

He has advocated for reinstating the Metropolitan Commuter Transportation Mobility Tax, colloquially called the Commuter Tax, and setting it at 1%, which he estimated could bring in more than $1.6 billion each year. The tax was eliminated in 1999 and was levied against individuals who worked in the city but did not live here. “When it was revoked, it was a time of billion-dollar surpluses. We weren't in a fiscal mess,” said Weprin, who has been one of the staunchest opponents of congestion pricing in the city, essentially because his Queens district is home to many car owners who drive into Manhattan for work, or did before the pandemic.

He added of the Commuter Tax, “Is that going to be the solution in and of itself? No, we need other ideas like that. But that one, to me, is a no-brainer.” He also supports legalizing app-based sports betting and granting a new casino license in New York City.

Running in the Democratic primary for comptroller in 2009, Weprin got 10.6% of the vote. The election went to a runoff and the victor was John Liu, who then went on to win the general election and is now a state senator from Queens. Weprin also racked up a hefty debt from that race – his campaign committee owed nearly $320,000 in public funds repayments to the New York City Campaign Finance Board, which was only repaid last week, according to his campaign. The payment came from his state campaign account, which held about $421,000 just prior to the June primary this year, the last filing available.

Weprin is again participating in the city public matching funds program, which will match the first $250 of each qualifying contribution for a citywide candidate at an 8-to-1 ratio. As of July 11, the last campaign finance filing deadline, he had raised about $172,526, spent $28,344 and had $144,182 in his campaign account. No matching funds have been sought or dispersed yet, but Weprin said he has since raised the money to receive at least $1.5 million in public funds.

He came out of the gate with a diverse slate of endorsements that could be crucial in a ranked-choice system, where candidates have to make broader appeals to the electorate. His campaign also emphasized that he comes from a middle-class background and union household; his mother, a Cuban immigrant, was a teacher with the United Federation of Teachers while his father was an elected official.

“From his plan to protect the health and safety of NYCHA residents to the work he will do to ensure the Department of Education is using our tax dollars to deliver high quality education for our children, David Weprin has shown that he has the right qualifications to be our next City Comptroller,” said Davilla, a Democrat from Brooklyn who chairs the Puerto Rican/Hispanic Task Force, in a statement accompanying the announcement.

“David Weprin has made working New Yorkers and recent immigrants a top priority for years,” said Rajkumar of Queens. “He has always worked to build a more inclusive, vibrant New York and I know he will do so as our next Comptroller.”

“In the State Assembly, David Weprin has been a strong ally in the fight for the New York Health Act,” said Gottfried, a Manhattanite who chairs the health committee. “He recognizes not just the health benefits but the clear financial benefits of single payer health care for New Yorkers. His record shows he has the understanding and values we need in a New York City Comptroller.”