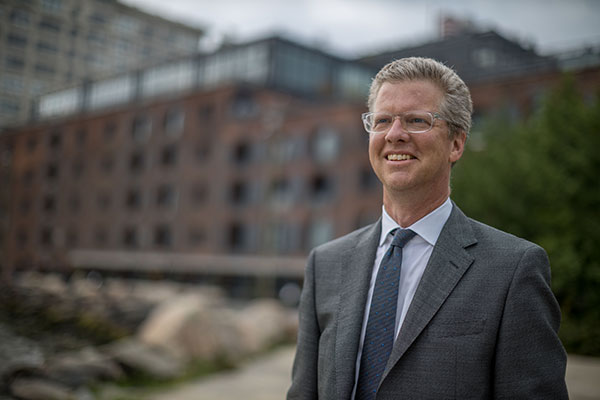 Shaun Donovan, formerly a cabinet secretary under President Barack Obama and commissioner under Mayor Michael Bloomberg, officially launched his 2021 campaign for mayor of New York City on Tuesday. Donovan, who has been fundraising, taking meetings, and appearing at candidate forums for months, is one of a large and diverse field of candidates vying for the Democratic nomination in the June primary.

Donovan, who grew up on the Upper East Side and now lives in Brooklyn, is a first-time candidate for elected office but has been in public service for much of the last several decades. Between 2009 and 2017, he served under Obama as Secretary of the Department of Housing and Urban Development (HUD) and then White House Budget Director. From 2004 to 2009, he led the New York City Department of Housing Preservation and Development, overseeing housing policies under Mayor Bloomberg. He also served in Bill Clinton’s administration as Deputy Assistant Secretary for Multifamily Housing at HUD and acting Federal Housing Administration Commissioner.

“I am honored today to announce that I am running for mayor of New York City to repair the torn fabric of this great city that I love, to bring together all New Yorkers to rebuild from the damage done by covid, and to reimagine an innovative city that truly works for everyone,” Donovan said during his announcement, with his wife and two sons standing next to him on the roof of Via Verde in the South Bronx, Manhattan in the distance as seen on the live Zoom video feed. Via Verde, Donovan explained, is a subsidized housing complex for low- and middle-income families that he helped build while working for Bloomberg.

As would be expected given his experience, housing was a central theme of Donovan’s remarks, though he touched on a number of other topics, particularly transit and jobs, and presented several big ideas -- including seven-day library service and “15-minute neighborhoods” -- that his campaign will be based around. He sought to present himself as someone with deep experience and important connections who is committed to lifting up the most disadvantaged without being divisive and effectively managing government without the influence of politics.

Throughout his announcement, including his launch video released earlier in the day, Donovan played up his association with President Obama and touted the work he did at the federal level, including a leading role in the response to the Zika and Ebola virus outbreaks, the housing crash and Great Recession, and Hurricane Sandy. He repeatedly stressed his connection with President-elect Joe Biden, arguing that he would be best positioned as mayor to work with the federal government to the city’s benefit.

“My lived experience in New York City has been one of hard work in public service,” he said, making the case that while he spent a lot of time in Washington, D.C., he’s also a New Yorker with deep roots in the city.

The announcement opened with endorsements from United States Senator-elect John Hickenlooper of Colorado and several former mayors from around the country including Mike Nutter of Philadelphia, Ashley Swearengin of Fresno, Manny Diaz of Miami, and Mitch Landrieu of New Orleans.

But conspicuously absent was Mayor Bloomberg, whose name went unmentioned throughout Donovan’s 36-minute presentation even as he touted the Via Verde project upon which he stood. The location was a careful nod to his experience trying to solve one of the city’s most entrenched problems, housing affordability, which many believe worsened because of the very policies that Bloomberg championed.

“We can build this type of housing everywhere in New York City. And yet we haven't,” Donovan said. “It is a lack of political will and vision that has held us back. For too long now our city's leadership has been held back by a struggle between the politics of progress and the politics of blame.”

Speaking to reporters after the announcement, Donovan was pressed about his Bloomberg connection, why he did not mention his former boss, and how his housing and development priorities would be different if he’s elected mayor. Unlike several other candidates in the race who worked for Mayor Bill de Blasio and regularly criticize him, Donovan continued his more delicate approach to Bloomberg. He said he was proud of the work he did under the three-term mayor, praising Bloomberg as “a great manager, a strong leader,” but said the current housing crisis calls for new approaches and solutions. He criticized de Blasio’s approach for focusing on rezonings for more housing density almost exclusively in communities of color.

“I think it has been a failure that we have focused rezoning in this city on Black and brown communities and haven't asked every community to do its fair share, to increase affordable housing in every neighborhood,” Donovan said when asked, and expressed support for zoning changes in Soho that de Blasio has recently backed that would upzone portions of the upscale neighborhood. When asked by Gotham Gazette, Donovan declined to name other neighborhoods where he would propose upzonings for more housing.

Among the measures he said he would take is working with the federal government to expand the Housing Choice Voucher program. And he stressed the need for an “all hands on deck approach” to fixing homelessness by reimagining the city’s right to shelter as a “right to housing.”

“It is a failure if you believe that you can solve homelessness with homeless programs,” he said. “Instead, what we need is a mayor who knows that homelessness is the tip of the spear of inequality and so many challenges in our society, mental health, substance abuse, and many others.”

Donovan emphasized the monumental challenge that the next mayor will face in addressing the rampant inequities in the city that existed long before the pandemic and that have only worsened over the last year. “The work we must do together is substantial, and it begins with an acknowledgement that our systemic inequity is not an accident of history. It is the result of conscious policy choices over the years that have too often sought to make us separate and unequal,” he said, pledging to appoint a chief equity officer at City Hall that reports directly to the mayor. “To truly make progress. We must understand that every issue is an issue of equity.”

He spoke of the need to “reimagine” everything from housing to criminal justice to education and made several lofty promises.

They included ending educational inequity, though he did not address how New York City has the most highly segregated schools in the country. “Public education in New York City has always been grossly inequitable. We will fix it and close the yawning achievement gap that persists through failure to act,” he said.

He also promised to increase teacher diversity, noting that 42% of educators of color teach 85% of the city’s students of color. “Where a budget pays to send police into our schools instead of paying teachers from local communities, we have a values, priorities and management problem,” he said.

In what served as a dig at de Blasio, whether intended that way or not, Donovan promised that he would take the subway every day as he spoke of creating a “coherent, multimodal transit plan” for each community and building 15-minute neighborhoods. “Within 15 minutes of your front door, every New Yorker should have a great public school, fresh food, access to rapid transportation, a park, a chance to get ahead,” he said.

Donovan pledged to encourage economic growth by creating a jobs and workforce training pipeline for college graduates, for residents of public housing and people caught up in the criminal justice system. In the first 100 days of his administration, he said he will work with the City Council to launch “equity corporate commitments” to increase the share of Black, Latino, and Asian workers in high wage jobs. And he promised to ensure that public libraries are open seven days a week.

It promises to be a heated Democratic primary, which will involve the first citywide implementation of ranked-choice voting and will all but decide the mayor’s race since Democratic voters outnumber Republicans by more than seven to one in the city. Donovan is competing for votes with Comptroller Scott Stringer, Brooklyn Borough President Eric Adams, former Counsel to the mayor Maya Wiley, former Commissioner of the City Department of Veterans Services Loree Sutton, former Sanitation Commissioner Kathryn Garcia, City Council Member Carlos Menchaca, former nonprofit executive Dianne Morales, former Citigroup executive Ray McGuire, military veteran-turned-entrepreneur Zach Iscol, and others.