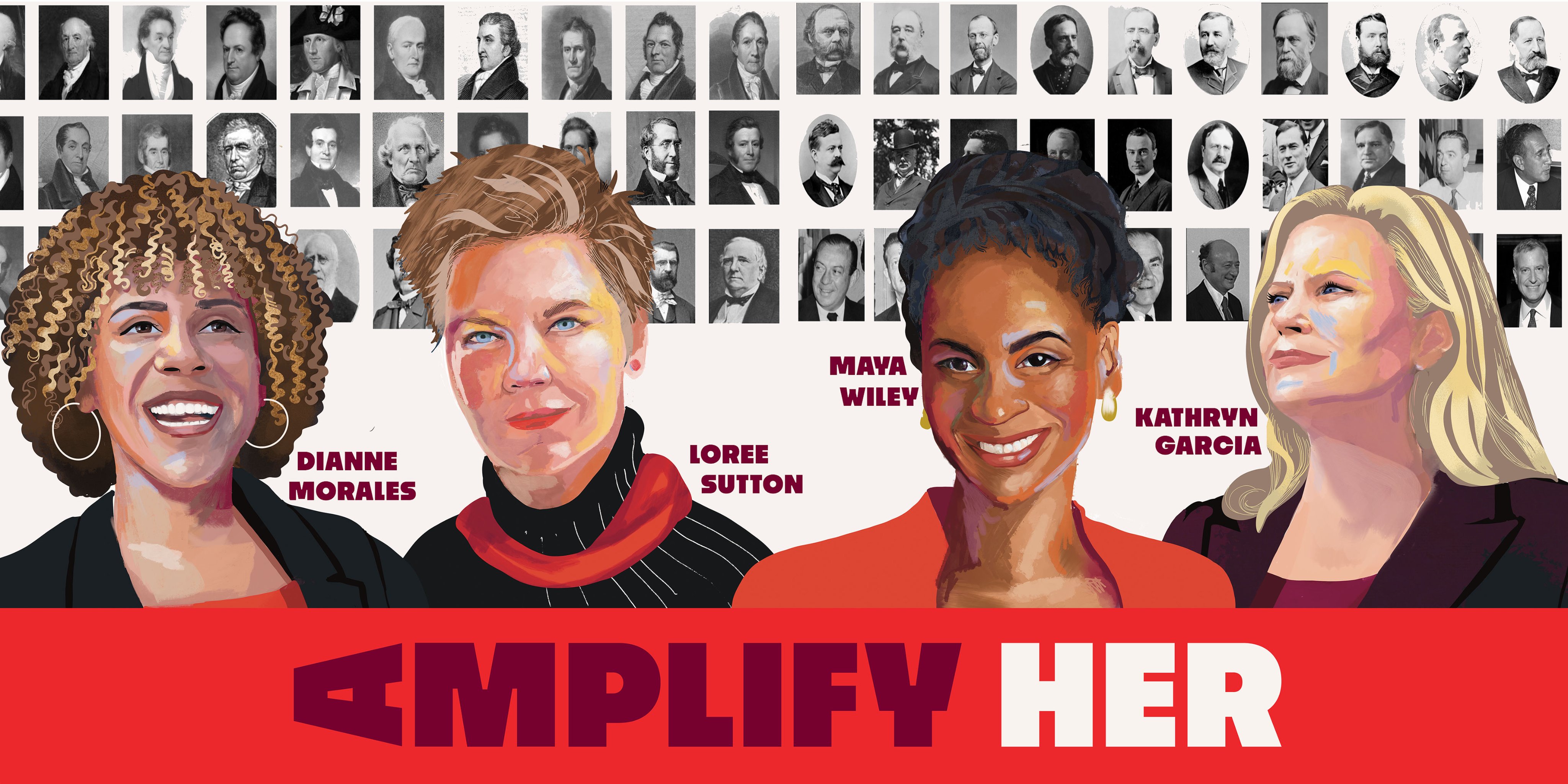 There’s never been a woman elected Mayor of New York City and four of the candidates attempting to change that fact through next year’s election met for a forum Tuesday night hosted by Amplify Her, an organization dedicated to electing more women to office in New York City.

They are competing in a much larger and still-growing field of candidates in what is set to be the first mayoral race with a party primary in June and featuring ranked-choice voting, which allows voters to rank up to five candidates in order of preference, rankings that come into play if no candidate is the first choice of a majority of voters. It encourages politicians to speak to a wider array of voters and replaces costly runoff elections while electing a winner based on depth of support beyond a simple plurality of first-place votes.

According to the event’s organizers, a ranked-choice straw poll was being sent to Amplify Her members and the group’s endorsement will come “in the new year.”

While any of the four would be the first woman elected mayor, Morales or Wiley would mark only the second person of color in the role after David Dinkins, and Sutton would be the first openly gay mayor in the city’s history. At one point, all but Morales served concurrently in the de Blasio administration, but Wiley, Garcia, and Sutton have all had harsh words for their former boss as they seek to replace him.

“I’m thrilled to be on an all-women panel, not that I find any of the men boring,” Garcia half-joked during her opening statement, while also noting that “women lead differently” and that “when you have a problem, give it to a busy woman. She’ll get it done.”

Garcia is running on her record as an experienced city government leader who has been called into several crisis situations, including as interim chair of NYCHA and “covid food czar.” She’s centering her campaign around strong government management and good city services, as well as the need to fight and prepare for climate change.

“We can’t build a new city if we follow the old rules,” said Morales, who is Afro-Latina. “I believe it’s important to not just elect a woman, but to elect a woman of color as the next mayor. We need to be committed to centering and elevating the voices and experiences of women of color.” Morales’ campaign is centered upon a community-first model of returning power to those who’ve often not been heard at City Hall.

“We can and must be a city where we can all live with dignity,” said Wiley, a former chair of the Civilian Complaint Review Board for NYPD oversight, and said “we can put the public back in public safety.” During the forum Wiley reiterated her position that NYPD Commissioner Dermot Shea should have been fired for how the police department treated Black Lives Matter protesters during the spring and summer.

Sutton said she would make a good mayor because “I know relationships are at the heart of the matter” and “it’s about forming safe and productive partnerships, reaching out and engaging with communities.” Throughout the forum, she proposed public-private partnerships to address the city’s needs. She added, “we can’t build back, we need to build forward.”

Garcia, who has repeatedly called the city’s current situation a “shitshow,” warned “we don’t want to return to” a New York City like the 1980s, when she grew up, noting that she was scared to take the subway after 8 p.m. at the time.

The first questions posed to the candidates were about how they have supported women, particularly in running for office and especially women of color. Each candidate said their campaigns’ senior leadership are comprised either entirely or mostly of women.

Sutton, who was the founding commissioner of the city’s Veterans Affairs Department, said she put an emphasis on hiring underrepresented groups, recalling an official at the city’s Equal Employment Office once telling her, “Commissioner Sutton, you have a distinct underrepresentation of white men.” She also highlighted her experience as a veterans surrogate for Hillary Clinton during her 2016 presidential run and her donations to women candidates, stating “politics as usual won’t cut it. We have to put women in charge at every opportunity.”

Morales noted she was a supporter of now-Congressional Rep. Alexandria Ocasio-Cortez’s first run in 2018, “before it was cool.” She also said that, as a nonprofit executive, “the majority of people I’ve served have been women of color.” She said she believes in “lift as you climb” as a motto for helping other women succeed.

Wiley referenced her work in the de Blasio administration transforming the Commission on Women’s Issues, which she described as “antiquated,” into the Commission on Gender Equity. She also touted her role as co-chair of the campaign for ranked-choice voting, saying that under the system “non-traditional candidates have more opportunity.”

“We worked very hard to recruit women as sanitation workers, said Garcia, who described the department as “highly male-dominated” and a “uniformed, paramilitary force.” She said she’s worked “to make sure that everyone is at the table because we [women] often are not.” Like Wiley, she voiced support for ranked-choice voting, saying it “gives everyone an opportunity to throw their hat in the ring.”

The candidates were also asked about their support for defunding the police and, more broadly, about their vision for public safety.

“Public safety is way too important to be left on the shoulders of the police,” said Sutton, who added “public safety is a shared responsibility.” She proposed establishing a public safety council to coordinate between public safety-related agencies and expanding the use of comp-stat to other agencies.

“All agencies are likely to lose funding,” said Garcia of the city’s budget woes. But like Sutton, she is not a proponent of “defunding the NYPD.”

Morales, who emphasized she was the first mayoral candidate to call for defunding the police, said it was necessary to “redefine and reclaim public safety,” with housing at the forefront because “no one can be safe and healthy without first having a roof over their head.”

Wiley has also repeatedly voiced support for moving significant funds from the NYPD to other services and programs. She voiced support for a “housing first strategy” and said the city “cannot and should not be policing in schools.” As an alternative, she proposed “student support teams” for school safety and “participatory justice funds” that would empower communities with high crime rates to address problems in their communities.

When asked about childcare and workplace protections, Sutton said that the city “has to develop public-private partnerships.”

Wiley said that the city needs to strengthen enforcement agencies for workplace justice and better coordinate with the state on the issue. She also said the city’s workforce development programs need to “more effectively target low-income workers,” including through CUNY, the public university system.

When asked how each candidate would close the city’s looming budget gap, Wiley said called for going to Albany for higher taxes on the wealthiest New Yorkers, as well as a vacancy tax, and said the city needs to “cut fat not bone” when making budget cuts, and that “while we will go through a budget cut process, it will be a moral process.”

Morales said she would try to prevent cuts by “working with the new super-majority” in the State Senate, because “as the city goes so goes the state.”

Garcia said efficiencies can and must be found throughout city government and said the city must work with labor unions to find additional savings.

The rest of the questions asked at the forum were directed at candidates individually, though rounds of questions often applied to a theme.

Garcia said that supporting local businesses, particularly those owned by people of color, needs to be part of creating an equitable post-covid city. She proposed forgiving sales tax liens and “having the city get out of the way with permits.”

Sutton said that police oversight “involves more than the CCRB,” pointing to the NYPD’s internal affairs bureau and inspector general, adding “as mayor it’s important to ensure that all three of those elements are in balance.”

When asked if the Council should have a greater role in appointing the NYPD commissioner, Garcia said no, believing that it would reduce accountability, but also saying “you have to have the guts to fire appointees if they’re not following orders.”

While reiterating her call for the firing of Commissioner Shea, Wiley also criticized the NYPD’s handling of protests this summer and said “kettling is never appropriate,” describing the tacit as escalatory.

At different points during the forum, both Wiley and Morales expressed support for reusing vacant commercial properties as affordable housing. Both also support congestion pricing. When asked about reducing car traffic, Morales said the city has to “move away from every individual thinking they have the right to drive around the city.”

Morales also said she is supportive of ending mayoral control of city schools, though she wants to figure out a better model than simply returning to a flawed Board of Education system that preceded mayoral control, which was granted by the state to Mayor Bloomberg early in his tenure and has been renewed several times since.

When asked if they would take donations from real estate, police unions, or finance industry lobbyists, Wiley and Morales said no to all three; Garcia said no to real estate and the finance industry; and, Sutton said yes to all, saying she believed in her own ability to “separate out bad actors.”